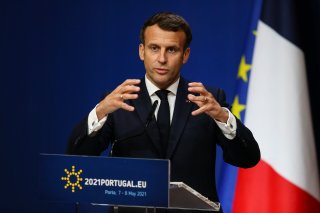 The main obstacle to European defense is Germany. For decades, Germany has given French initiatives rhetorical support but little more, just enough to maintain the appearance of Franco-German cooperation. But European defense would require significant German commitment and an increase in the German military budget, which Germany has resisted, not only to maintain its sacred balanced budget but also to minimize its role in global security. It’s a political, not an economic, choice. To paraphrase the old saw, Americans (and French) come from Mars, Germans from Venus. Other European states can hide behind Germany. Is Germany (and Europe) too poor to afford both drones and butter? Hardly.

The trump card is of course the nuclear calculus; with the departure of the United Kingdom from the EU, the issue of French nuclear deterrence and/or retaliation is critical. Having a European nuclear deterrent to balance the Russian nuclear capacity would be essential in the absence of the United States—but that would mean potentially putting French nuclear forces under a European command, which is not at all likely. Alternately, there would have to be a firm promise that the Europeans could count on the French nuclear deterrent becoming a European deterrent; this would always be an extremely sensitive question, and if there was any equivocation, possibly born of political disagreements, the impact would be devastating. Weakening this cohesion/resolve would of course become a major objective of Russian diplomacy, disinformation, and economic incentivization. A German government led by the Greens or a coalition in which they play a major role might well be more critical of Russia than the Merkel regime yet even less willing to support a European army. And the significant support for Marine Le Pen’s candidacy in the 2022 French presidential elections indicates that France itself might abruptly change course. Would the concept of European defense and even the EU survive a Le Pen presidency unscathed?

IT IS clear to us and almost everyone that a continued U.S.-Europe security partnership is in everyone’s best interest, and we do not advocate any attempt by Europe to “go it alone.” At the same time, a significant reassessment of roles, missions, and resources could actually strengthen Euro-Atlantic security and make it both more stable and cost-effective. Much of what would be needed to strengthen NATO is also what would be necessary to create a self-reliant European defense.

While it is beyond the scope of this piece to offer a “solution” to the challenging security environment that Europe faces, there are two areas where the constituent nations and collective political bodies would do well to focus. The first is to look hard at what capabilities offer the most credible deterrent to Russian “adventurism” and other threats that may be on the horizon. The remarkable economic and technological development across the continent over the last several decades—along with significant societal changes—make a fresh assessment a reasonable undertaking. A shift in emphasis from industrial age warfare to the effective use of technology and more cost-effective weapons might well enhance the security of the region and reduce the economic burden. Simply using a two percent of GDP yardstick as a sole metric makes very little sense and can be destabilizing or counterproductive in its own right.

There may be some cost-effective capabilities that would provide a credible deterrent against a kinetic attack without the support of U.S. forces being deployed to eastern Europe. Even with the full support of the United States through NATO, it is possible that these capabilities—and others that will be developed—might still be a better investment for European nations.

A gradual shift to more self-reliant capabilities could even ease the pressure on America to reduce defense expenditures without accepting unreasonable risk. As discussed earlier, there would not be a lot of time to react or adjust to a significant American retrenchment.

Today, discussion of strategic autonomy seems to be taking place in a rarefied atmosphere, as a largely theoretical issue with little urgency. After all, the debate has been going on in one form or another for seventy years, and talk about European defense may have diminishing returns. Certainly, the election of Joe Biden as president indicates that at least for the time being, American guarantees to European security still stand. That situation could change rapidly if in 2022, the Republicans, still the party of Trump, gain control over both the Senate and House, presaging Trump’s return to the White House in 2024. The subject of strategic autonomy would no longer be theoretical. Recognizing that Trump might pull the United States out of NATO or remain in the alliance without being willing to respond militarily to Russian provocations, Europe would have two years to cobble together an alternative plan for a purely European defense. Then the question would be whether Europe could act—and whether it would act.

In 1939, an infamous newspaper headline asked whether the French were willing to “die for Danzig.” After 2024, the issue could be whether Europeans would be willing to die for Vilnius. Faced with such an unprecedented situation, a post-modernist Europe could choose to morph into a complete superpower—at great cost—transforming itself and changing global dynamics. Or else, Europe would have to come to terms with Russia from a position of inferiority. Ironically, a weak Russia might succeed where the mighty Soviet Union failed.

Steven Philip Kramer is a Global Fellow at the Woodrow Wilson International Center for Scholars.

George Topic is Vice Director of the Center for Joint and Strategic Logistics at National Defense University.

This article represents only the opinions of its authors and should not be construed as reflecting the position of National Defense University, the Department of Defense, or the U.S. government.