Good News from the Russian Front 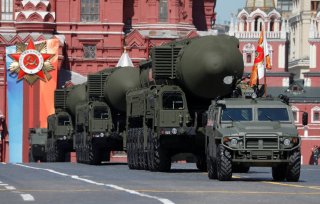 Thirty years ago on December 25, 1991, the Soviet Union disappeared. The Cold War that threatened nuclear Armageddon ended a whimper rather than a bang. As someone who had worked enthusiastically for Ronald Reagan, this was a vision about which I had dreamed but not expected to see. That Christmas Day, I had the good fortune to stand in Moscow’s Red Square and watch as the Soviet flag came down at the Kremlin for the last time.

The good news was that the “evil empire”—as Reagan rightly named it—was erased from the map. The looming question remained: what would happen to its superpower nuclear arsenal now left in Russia and fourteen other newly-independent states. If there were a struggle for operational control of the nuclear-tipped intercontinental ballistic missiles left in Ukraine aimed at U.S. targets, would some of these be fired? How many of the thousands of tactical nuclear warheads in the Soviet arsenal would become “loose nukes” and be for sale in international arms bazaars?

From an American perspective, the past three decades have seen many failures and disappointments in relations with Russia and the other former Soviet states. With Russian troops now massed near the Ukrainian border, and Putin making extreme demands that the United States and NATO will certainly reject, there is a real chance that the months ahead will see a bloody war in Ukraine.

Nonetheless, in a season that promises “good news of great joy,” what is the great “good news” for Americans from the Russian front? To answer that question, it is necessary to stand back from the noise of the day and think seriously about what could have happened over the past thirty years. Start with American national interests: what matters more to the United States than other things that matter? In the mantra of the wise men who developed the strategy that defeated the Soviet Union in the Cold War, America’s core national interest is to “ensure the survival of the United States as a free nation with our fundamental institutions and values intact.” Events on the Russian front that could have had the greatest impact on America’s most vital interests derive from the fact that it had a nuclear arsenal that could erase the United States from the map.

What could have happened to that nuclear arsenal in December 1991? Just two weeks before the Soviet collapse, this was the central question put to Secretary of Defense Dick Cheney on Meet the Press. To the question, Cheney responded: “If the Soviets do an excellent job at retaining control over their stockpile of nuclear weapons and they are 99% successful, that would mean you could still have as many as 250 that they were not able to control.”

After catching his breath, the moderator asked the secretary what the United States could do to affect these developments. Cheney looked troubled, making it clear that he had been thinking about this nightmare. But his answer was depressing. As he said: “The only realistic thing for me to do as secretary of defense is to anticipate that one of the byproducts of the breakup of the Soviet Union will be the proliferation of nuclear weapons.”

Say what! Try to imagine a world in which 250 nuclear weapons had ended up loose and found their way into the hands of terrorists like Osama bin Laden and his Al Qaeda terrorists who destroyed the World Trade Center in 2001. Or Iran? Or others?

Fortunately, not all Americans were fatalistically willing to let things happen. Frustrated by President George H.W. Bush’s administration’s failure of imagination, Democratic senator Sam Nunn of Georgia and Republican senator Dick Lugar of Indiana stepped up with a bold idea. They wrote, and with no help from the administration, passed legislation now known as Nunn-Lugar. This initiative gave Department of Defense and Energy officials authority and money to build partnerships with former Soviet nuclear custodians in Russia and the other states to secure former Soviet nuclear weapons. Together, Americans and Russians shaped a new post-Soviet nuclear order.

Over the past three decades, with strong bipartisan support, more than $20 billion of American taxpayer dollars has been invested in the most cost-effective expenditure in the defense budget. More than 3,000 long-range missiles that had targeted American cities were ultimately removed from Soviet successor states in the greatest nonproliferation success in history. Thanks to help from Nunn-Lugar programs, 14,000 short-range nuclear weapons, many of the size well suited for terrorists, were secured and most of them eliminated.

Disappointing as the U.S. relationship with Russia has been and promises to be, when it came to stepping up to the challenge that mattered most, the two governments found a way to prevent a plausible, even likely, catastrophe. Could the strategic imagination, readiness to take a chance on an uncertain venture, and difficult but determined cooperation between Russians and Americans displayed in achieving this nearly miraculous outcome offer clues for other challenges we face today?