A GOP Landslide: 5 Things We Learned from the Midterm Elections 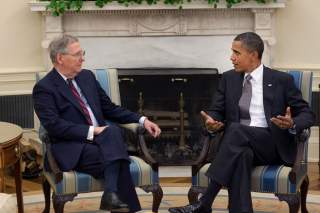 The midterm elections have come and gone—and with it, the Democrats' Senate majority.

Here are five lessons to take away:

1. This was a Republican landslide, not a generic anti-incumbent protest:

Pundits pushing back against the idea of a "Republican wave" are missing the point. One correspondent protested that this was mostly an election where Republicans narrowly won red states.

Even at the Senate level, that isn't entirely true. Tom Cotton blew out Mark Pryor in Arkansas. David Perdue avoided a runoff in Georgia. The Senate races that were close mostly featured Republicans running against Democratic incumbents or candidates pretending not to be liberal Democrats running against Republicans.

But Republicans swept nearly all the competitive Senate races and made some races competitive that weren't supposed to be (hello, Virginia). Democrats didn't win 100 percent of the seats they were seeking in 2006 or 2008, and no one would deny that those were good years for the Democrats.

When you move beyond the Senate to governorships and state legislative races, the picture is even clearer. The only major Republican incumbent to lose was Pennsylvania Gov. Tom Corbett, who was clearly overmatched. Republicans were reelected in Ohio, Wisconsin, Michigan—even in Kansas and Florida, where things looked grim for GOP incumbents.

Republicans gained governorships in Massachusetts, Maryland and Illinois, all blue states. The Democratic Senate candidate in West Virginia, a state that went for Michael Dukakis in 1988 and Jimmy Carter in 1980, didn't even clear 40 percent of the vote.

Things could get even worse for the Democrats. What incentive does the national party have to spend massively to defend Mary Landrieu at this point?

Of course Republicans to some extent benefited from the electoral map and off-year turnout patterns, as well as the issue environment. Show me an election where such factors aren't in play.

If this wasn't a Republican wave election, then the phrase has no meaning. And that's actually a respectable argument to make. Contending Democrats were merely caught up in anti-incumbent fervor isn't.

2. To the extent Barack Obama was an issue in this election, he hurt Democrats:

No, Obama wasn't the only issue. It's also true his unpopularity reinforced state-level problems with the Democratic power structure in places like Illinois and Massachusetts. But from Iowa to Maryland, neither the president, nor the first lady were able to do much to help Democrats who were really in tough races.

Even Democrats like Pryor and North Carolina Kay Hagan, with real histories of overcoming their party's national-brand problems, were ultimately dragged down by the president and his policies—including the health-care overhaul that bears his name.

Obama peaked early in his first term and won reelection with a shade more than 51 percent of the popular vote, a share comparable to George W. Bush's in 2004. Just as Republicans misled themselves with talk of a permanent majority after Bush's relatively narrow reelection, Democrats convinced themselves 2010 was some kind of reactionary last gasp rather than a warning sign that they needed ideal conditions to win.

3. Republicans could still blow this opportunity:

Related to the last point, there is nothing in these results that suggests Republicans could drive people back to the Democrats with poor decision making over the next two years. They will have to choose carefully between when they push back against executive initiatives and when they don't, when they decide to use their oversight powers to keep the administration accountable or when it will be viewed as partisan harassment.

These are not easy decisions to make even in the abstract. Factor in the competing agendas of the different Republicans on Capitol Hill and it becomes even more complicated.

4. Republicans will divide on important issues:

Ted Cruz and other leading conservatives are going to try to hold the Republican leadership to their tentative promises to use the Senate reconciliation process to repeal Obamacare. But the Republican establishment is going to be emboldened, because they will feel they won this election.

After all, the most prominent Tea Party primary challenges failed. This time, it was the Democrats who looked unhinged and ideological, rather than the Republicans. The cautious establishment candidates mostly did what they needed to do: avoid costly mistakes and keep the focus on the Democrats. Whether they will actually try to advance conservative policy goals is a separate question. Which is what brings us to the final lesson.

5. Republicans have conflicting visions about how best to govern:

Over and over again on the cable news networks, commentators repeated some version of the following: The Republicans who won this election are the people who want to govern, not the Tea Party types.

This is gibberish. These Republicans have different ideas of how to govern and to what end. Sure, there are Tea Partiers who merely want to throw red meat. There are also establishment Republicans who just want to get reelected. Mike Lee, Rand Paul and even Marco Rubio are much more ambitious policy entrepreneurs than Pat Roberts.

The big question while be who will replace the likes of Tom Coburn, ardent conservatives whose credibility on policy is recognized, if not always appreciated, even by establishment types.

All these conflicts will set the stage for the 2016 presidential election—a campaign many of Tuesday's election winners and members of the new Senate majority hope to join.