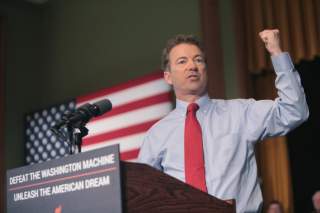 Presidential primary debates are supposed to be placid affairs. Somebody forgot to notify Rand Paul.

The Kentucky senator was in combat mode literally from the first minute of Thursday’s Republican candidates forum, when he interrupted Donald Trump to accuse him of gaming his party affiliation. And that was just an appetizer to the volcanic clash between Paul and New Jersey governor Chris Christie over the NSA’s metadata collection. “Get a warrant!” Paul shouted, before taunting Christie for his post–Hurricane Sandy embrace of President Obama.

Paul’s truculence seemed odd when juxtaposed with his answers later in the debate, which were generally calm and thoughtful. So why the initial pugnacity? Why did Paul, usually a laconic and rumpled presence, emerge as the debate’s attack dog?

For the answer, we need to review what’s happened to Paul over the past couple months. To say he’s had a rough ride is to commit an understatement akin to observing that Donald Trump may have overstepped on Thursday. Once paraded across the pages of Politico as the Republican frontrunner, Paul’s poll numbers have tumbled into single-digit territory. It isn’t game over—Marco Rubio, a more mainstream candidate than Paul, is stuck in a similar rut—but it does create a sense of urgency. How can Paul lure back tea party voters with Donald Trump fulgurating at the center of the conservative solar system?

There are two schools of thought on this question. The first is that Paul needs to advertise his more traditional conservatism and downplay his father’s libertarianism, with occasional exceptions when the two intersect, like over the NSA and Syria. This is the adopted strategy of the Paul campaign, and it’s compelled Paul to do everything from carving apart the tax code with a chainsaw to leading the fight in the Senate to defund Planned Parenthood, while sounding uncharacteristically hawkish against ISIS and even Russia.

The second school teaches that Paul should appeal to his father’s supporters first, and the rest of the Republican base will follow. Paul’s poll numbers sank, this school contends, because he’s bleeding libertarian votes. Without Ron’s full-throated dovishness, there’s nothing to distinguish Rand from the rest of the GOP pack, and no reason for conservatives to support him over, say, Ted Cruz or Scott Walker.

There’s something to that critique. Like a boy band that’s been given too much radio play, most of the 2016 candidates have a defining characteristic. Rubio is the Charismatic One, Jeb is the Wonky One, Walker is the Experienced One and Cruz is the Passionate One (Trump is the oafish manager who deludes himself into thinking he can sing). Paul was always the Edgy One, offering something outside the GOP’s traditional wheelhouse, blaming hawks for ISIS and smiling puckishly when anyone got offended. Now his previously diehard supporters, distinct from mainstream conservatives and never sold on the Republican Party, are worried he’s conforming to something they rejected long ago.

Those concerns bubbled up over the past month. At Politico, longtime Ron Paul backer Jonathan Bydlak proclaimed he was tired of defending Rand. The American Conservative’s Dan McCarthy was more restrained, but pondered whether Paul missed his “Giuliani moment,” a breakout display of dissent similar to his father’s debate fight with former New York mayor Rudy Giuliani. Justin Raimondo of Antiwar.com snarled that Paul “crossed the Rubicon,” caught him taking the Ayatollah Khamenei out of context to justify his opposition to President Obama’s Iran deal, and dropped the mic for good measure.

Impugning Iran’s Supreme Leader isn’t generally a cardinal sin for conservative voters. But for Paul’s libertarian backers, it reinforces a perception that he’s willing to mortgage out his positions on foreign policy—and even do so dishonestly—in order to fit in.

They were suspicious when he proposed increasing defense spending, aghast when he signed Tom Cotton’s peevish letter to Iran, and in full mutiny after he brushed aside the Iran agreement. Excuses about how he was trying to compete in a hawkish Republican field did nothing to mollify them. Some of these thinkers were literally excommunicated from the GOP by David Frum for the sin of being wholly correct about the Iraq war. They’ve come to view the Republican Party as interventionist by default and despair that Paul, a rare exception, is slowly being corrupted.

Paul’s defenders counter that he can’t win if he’s associated with President Obama’s foreign policy, that Rudy Giuliani’s mammoth summer 2007 lead shows it’s far too early to be engraving political tombstones, and that Paul is still consistently dovish on many issues. These are all valid points and plenty of Ron’s foot soldiers have remained loyal to Rand. Nevertheless, it would be foolish to dismiss the discontent, which runs concurrent with other problems like Paul’s inability to lock down a major donor and reported complacency in the face of campaign woes.

Thursday night, then, was Paul jamming two jumper cables into his political base. He needed to provide, as Israel Shahak called it, encouraging signs of polarization—and he did. The snipes at Trump were calculated to remind skeptical paleoconservatives that they were better off with him than a faux nationalist. The feud with Christie was to reassure libertarians that he still shares their distaste for the surveillance state. Christie came to the debate, as Kingsley Amis described one of his characters, “looking more than ever like Genghis Khan meditating a purge of his captains.” Paul smirked and punched him in the solar plexus. It was his attempt at a “Giuliani moment,” one that he hoped would remind libertarians, donors and even some traditional conservatives why they should stay in his column.

Whether it worked remains to be seen. The American Conservative’s Daniel Larison gave Paul mixed reviews and Raimondo, judging by his Twitter feed, was unmoved. Still, other libertarians have told me they were jazzed by Paul’s performance and there’s no question he forced his way back onto the front page.

Now can he rebound in the polls? This may be the first time in history a candidate’s answer to that question hinges on the caprice of Donald Trump.

Matt Purple is the Deputy Editor for Rare Politics. Before, he was the assistant managing editor of the American Spectator. His work has appeared in National Review, The National Interest, The Washington Times, The Daily Caller and Townhall.com. He lives in Washington, D.C. Follow him on Twitter@MattPurple.