Is the GOP the Zombie Party? 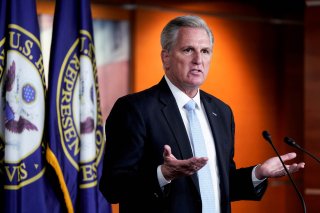 The political scientist Wallace Sayre had a saying about why academic debates and their otherwise docile belligerents tend to get so heated. “The politics of the university are so intense,” it goes, “because the stakes are so low.” The same is true of the intramural jockeying of the Republican Party, though it is portrayed as a civil war between the “pro-Trump” and “anti-Trump” factions. Regardless of who wins, the GOP does not appear keen to fundamentally change as an institution.

There are indeed unsung gunfighters on the local and state level, waging lonely wars against anti-white “critical race theory” and other cultural cancers. But they often run up against the superstructure of the Republican Party, which has a knack for taking legitimate concerns, reducing it all to a fundraising drive, and diffusing the anger of its base until the next outrage can begin the cycle anew.

Republicans will pass bills prohibiting biological males from competing in women’s sports but won't stand against the normalization of what was until recently considered a mental illness with grave implications for the afflicted and society. Leave our bread and circuses alone, they say, but we don't mind so much the assault on the sexes.

The GOP will denounce critical race theory while affirming the basic tropes, narratives, and talking points of that ideology’s proponents. Linda Thomas-Greenfield, President Joe Biden’s ambassador to the United Nations, and Republican Senator Tim Scott of South Carolina both use the term “original sin” in reference to America’s past. Commenting on the need for more prison, police, economic, and other reforms in the spirit of equity, Ja’Ron Smith, a former deputy assistant to former President Donald Trump, agrees that "the work is still out there, culturally, to change our country.” To make it less racist, in other words. Smith now serves as Chairman of the Center for Second Chances at the America First Policy Institute—Trump’s official policy think tank.

It was perfectly fitting, then, that in the same week that the GOP voted unanimously with Democrats to establish Juneteenth—also known as “Black Independence Day”—as a federal holiday, Republicans closed ranks to protect corporate interests.

Republicans voted unanimously against HR 1187, a bill that, though imperfect, would impose more stringent disclosure regulations on corporations. Under HR 1187, publicly traded companies would have to disclose information on political spending, tax jurisdictions, and executive pay raises. Forcing corporations into strategic disclosure could, in theory, be turned toward socially conservative aims, now that most of the country’s CEOs have gone woke for cynical and ideological reasons. Republicans, however, seemed unanimously uninterested.

When a raft of bills intended to bring tech companies to heel floated into Congress, McCarthy criticized them, claiming they would give regulators too much power over giants like Amazon, Facebook, Google, and Apple. The bills in question, if passed, would either break up or cut down some of the biggest, most powerful industry titans with long records of anti-competitive behavior—to say nothing of the censorship concerns emanating from the party’s base. But McCarthy is looking for a softer touch, and he may have personal reasons for doing so.

“Two of the biggest tech companies targeted by the House legislation, Apple and Amazon, are represented in Washington by Jeff Miller, a close ally of Mr. McCarthy,” the Wall Street Journal reported. “They are personal friends, and Mr. Miller is a top GOP adviser and fundraiser.” Curious connections like these are a theme with McCarthy specifically and with GOP leadership generally.

Recall that McCarthy recently rented a swanky suite owned by Frank Luntz, a GOP pollster notorious for rationalizing the party leadership’s polarization against its base—and reality.

In 2003, as the opioid crisis silently cut down Americans across the country, Luntz defended the pharmaceutical companies profiting on death. “I am a proponent of the pharmaceutical industry,” Luntz told PBS. “I am a supporter of a very famous medication right now, OxyContin, because I think that this is a miracle drug which allows people to get through the day.” Luntz partnered with Purdue Pharma, the manufacturer of OxyContin, to tell the public that it was a less addictive, safer drug. That was a lie paid for in blood.

In 2019, the state of Massachusetts filed a lawsuit against Purdue Pharma that mentioned Luntz. He and his firm, the suit states, helped Purdue Pharma run a public relations campaign “deflecting blame from Purdue's addictive drugs by stigmatizing people who become addicted.”

Today, when he isn’t having slumber parties with McCarthy, Luntz operates as a key GOP whisperer, telling party leaders all the awful things they want to hear.

The problem with the GOP is that it desperately wants to court corporations back away from the Democratic Party more than it wants to deliver on the interests of its base. It wants to portray itself as a working-class party without committing to working-class policies. It fights a culture war it has already lost while utilizing the same or very similar rhetoric and symbolism as the opposing forces, which means they’re not all that much opposed. The Republican Party’s problems gets just about everything wrong, but a Politico analysis cuts close to the truth: “The business community’s interests are not to be xenophobic. It’s not in their interests to be isolationist. It’s not in their interests to be protectionist.” Stripped of Stanton’s hysterical terminology, this plainly means that the interest groups the GOP cares to cater to have no appetite for immigration restrictionism, anti-interventionism, and anti-globalism. These are, however, key issues for Republican voters.

The ephemeral cultural skirmishes that the party engages in distracts from the fact that it remains institutionally opposed to the interests of its base. It is more willing to tell them how to think than listen to what they think and ultimately offers the illusion of opposition to the Democratic Party—it is the same poison on a slower drip. That won’t change until Republican voters stop viewing their party as an ally but as a vehicle for their interests and not so infrequently an enemy to their cause.