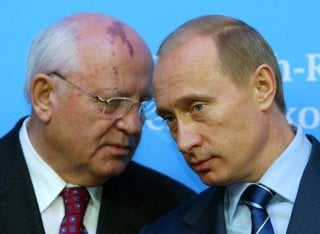 The video featured a sobering image of a nuclear blast, with the terrifying mushroom cloud, capturing the ultimate confrontation between the superpowers. It was the ever-present consequence if the leaders of the major powers choose, consciously or by misstep, to resurrect the confrontation policies of the pre-Gorbachev era. Gorbachev understood what was at stake and made every effort during his time in office to lessen the prospect of a nuclear Armageddon.

Gorbachev’s famous speech where he proclaimed: “We can change history” appeared on the widescreen, together with the fall of the Berlin Wall, with construction cranes removing huge concrete slabs that threaded through the heart of Berlin. The wall served as a metaphor for previous Soviet regimes which deeply feared the West, both psychologically and militarily, and whose removal marked a turning point in the twentieth century.

A Free and Open Russia

Cohen concluded with an allusion to the new and untested Putin administration. Putin’s KGB background had already given rise to concern both in Russia and the West as to Russia’s future direction. Cohen emphasized, with a real passion, that Gorbachev had “opened doors” for future leaders and citizens to enter. These doors led to progress and the betterment of mankind. Cohen continued that it was up to the current leaders to take advantage of these new doors. With an ominous tone in his voice, he queried whether new leaders would retreat, and go through “back doors.” He did not elaborate, but the meaning was well understood.

Unfortunately, Cohen’s foreboding has proven to be well founded. In the fall of 2022, we are witnessing a substantial closing of “the doors” evoked by his imagery. Vladimir Putin is attempting to take Russia back to its pre-Gorbachev era or even, some would contend, to its brutal Stalinist past. Freedom of press and speech, assembly and religion, an independent judiciary and rule of law, as well as other essential foundations of a democratic society are in accelerating retreat.

Nevertheless, the concepts and values that Gorbachev introduced into Russian society persist and have not been forgotten. I have spent considerable time in the past four years as a visiting lecturer at a major Russian law school in Moscow, interacting with dozens of young and aspiring lawyers. They are among the segment of Russian society that long for a country very different from the one Putin is now forcibly imposing. These students, many of whom aspire to study law in the United States or England, are silenced, at least for the immediate future. But Gorbachev’s values and principles are very much on their minds in the new Russia they hope to create—but which appears, for now, beyond their reach.

With the passage of more time, perhaps Russia may be able to revive and implement Gorbachev’s vision of a free and open society. Doors swing in both directions.

The Foundation for the Development of Democracy and World Peace

In the fall of 2000, Gorbachev established a new U.S. nonprofit entity, the Foundation for the Development of Democracy and World Peace, referenced earlier in this piece. I worked closely with Gorbachev’s assistants in the preparation of the legal papers and our firm was honored to host the first meeting of their board of directors in New York City. Gorbachev spent the morning there, chairing the meeting, with former Secretary of State Jim Baker, who was on the board, participating by telephone. Colin Powell was to serve on an Advisory Board. Prominent academics on both the U.S. and Russian sides were also board members, as was Walter Rockler. We felt that it had great potential considering the standing and gravitas of the founders.

The objectives of the new entity were grand ones. The United States, including the government itself, would join Russia in sponsoring major projects designed to improve Russian-American relations. A priority project in this regard was the establishment of a new international university with campuses in both countries. In a discussion in Moscow two years after the founding, Gorbachev’s aides told me that this idea had received the apparent endorsement of President Putin, and suggestions were aired about whether this project and others by the new foundation could be placed on the agenda of an upcoming summit in 2002 between Presidents Bush and Putin. The jointly sponsored foundation might help, they thought, in changing the widespread perception in Russia that America, having “won” the Cold War, now viewed Russia as a second- or third-class world player with few cards to play on the international scene. Gorbachev believed that the work of the foundation—with both countries working as equal partners—might help change these perceptions.

Sadly, the expectations and dreams of the foundation were never realized. Funding never materialized from governmental or private sources. And significantly, relations between the United States and Russia substantially deteriorated. Gorbachev condemned the U.S. invasion of Iraq in 2003, which he saw as entirely undemocratic and without foundation in international law.

Other U.S. foreign policy decisions in subsequent years also undermined such cooperation, especially the enlargement of NATO—from sixteen to thirty members—an almost doubling in size. By contrast, Gorbachev had envisioned the integration of Russia into an entirely new security arrangement within the framework of the Conference on Security and Co-operation in Europe.

After the signing of the historic INF Treaty in 1987, Gorbachev outlined this stark choice facing the United States and the Russian people:

…civilization has approached a dividing line, not so much between different systems and ideologies, but between common sense and mankind’s feelings of self-preservation, on the one hand, and irresponsibility, national selfishness, prejudice—to put it briefly, old thinking—on the other … What matters now is that we cannot let those opportunities pass, and must use them as fully as possible to build a safer and more democratic world, free from the trappings and the psychology of militarism…

Today, we find ourselves and the world mired in a destructive and pointless war in Ukraine, initiated by the “irresponsibility, national selfishness, [and] prejudice” of the “old system” denounced by Gorbachev thirty-five years ago. The “trappings and psychology of militarism” are now ascendant in Putin’s Russia, as he seeks to restore his vision of a Soviet empire.

Gorbachev set forth an entirely different vision of the future of Russia: one that is nuclear-free, open, and democratic, with speech and the press undeterred by fear and repression; its economy offering its citizens a life comparable to that achievable abroad; a country residing in peace with its neighbors.

Gorbachev’s compelling vision may yet prevail. My recent experiences with students at Moscow’s largest law school evidence that many embrace that future. Patience, perseverance, diplomacy—and faith in the young people of today’s Russia—will be required in the difficult and perilous period ahead. The potential of this new generation of Russians making his vision a reality is Gorbachev’s lasting legacy.

Jeffrey A. Burt is a retired partner of Arnold & Porter, an international law firm based in Washington, D.C., who founded its Moscow office in the early 1990s. He has served as Chair of the American Bar Association’s committee on the former republics of the Soviet Union and more recently has been a visiting lecturer at the Kutafin Moscow State Law University.