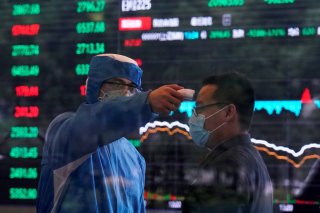 Xi Jinping, during his appearance at the Chinese People’s Political Consultative Conference in Beijing on Saturday, talked about analyzing the Chinese economy from a “dialectical and long-term perspective.”

Should we be surprised that the Chinese leader is resorting to ideological circumlocutions when his economy is contracting and he knows he can’t rescue it soon?

The official National Bureau of Statistics reported that gross domestic product contracted 6.8 percent year-on-year during the first quarter of this year, the first announced decline since Beijing began issuing quarterly GDP statistics in 1992. Many assessments, including the widely followed China Beige Book, pegged the contraction at about 10 percent.

There has been a recovery this quarter, but it is hard to figure out the extent of the upturn. “It’s the worst information flow in my experience, which means since the 1980s,” Anne Stevenson-Yang of J Capital Research told me.

Workers have returned to job sites, but it appears the uptick has not been enough to move the country into positive territory. In general, factories have been ready to fill orders, but orders, especially from offshore buyers, are scare. The coronavirus pandemic has flattened China’s biggest export markets, those in Europe and North America. UBS, the Swiss banking giant, expects Q2 growth to remain negative.

The full-year does not look much better. The normally China-bullish International Monetary Fund forecasts the Chinese economy to grow only 1.2 percent this year. Private analysts believe growth will range between 1.5 percent and 2.5 percent. For last year, Beijing reported the economy grew 6.1 percent.

It is evident that China will not have, as analysts had once predicted, a V-shaped recovery. An L-shaped one—a long-drawn-out climb out of a hole—is more like it.

Even Chinese officials do not appear confident. While delivering his Work Report at the annual meeting of the National People’s Congress on Friday, Premier Li Keqiang announced that China would not set a target for the growth of gross domestic product for this year.

For years, economists and analysts had been recommending that Beijing not focus on creating GDP. Its relentless pursuit had, year in and year out, led to distortive investment, most famously the “ghost cities” and high-speed rail lines to nowhere. Yet the decision to pick this time to forego announcing a GDP target suggests Chinese leaders know their economy cannot meet any but embarrassingly low goals.

Analysts had assumed Beijing would pour on massive stimulus this year, to power through this downturn like it did after the onset of the 2008 global crisis. Premier Li, however, did not reveal a big fiscal stimulus package Friday. Instead, he announced stimulus of 4.8 trillion yuan ($672.4 billion). UBS thought that will end up about 4.8 percent of GDP. Standard Chartered estimated 5.2 percent.

This compares to stimulus in the past six months that amounted to 6 percent to 12 percent of gross domestic product, according to Andrew Collier, a Hong Kong-based analyst of Chinese debt.

Observers were unimpressed with the size of the just-announced stimulus. As Hong Kong’s South China Morning Post wrote, “Economists have made few changes to Chinese growth forecasts for this year after Beijing announced details of a new stimulus plan, with many disappointed it was less aggressive than the support package implemented after the global financial crisis in 2008.”

Huang Souhong of the State Council’s Research Office on Friday suggested more stimulus would be on the way. As he stated, “We haven’t used up all our ammunition, and we have ample room for follow-up tactics.”

Despite Huang’s words, there are reasons to believe central government technocrats don’t have that much “ammunition.” First, China, after years of heavy stimulus spending, has far less capacity to take on indebtedness. According to the Institute of International Finance, China’s debt-to-GDP ratio increased by 11 percentage points in 2019—and by a stunning seven points last quarter alone. It is now pegged at 317 percent.

Yet there are reasons to believe that ratio is, in reality, far higher. Not all categories of debt are included in these calculations, the country’s reported GDP looks exaggerated, and the excess of the liabilities of China’s financial institutions over assets should be added to the ratio. The ratio looks understated even if central government assets were somehow factored in.

Second, China’s foreign exchange reserves may not be as large as reported. Chinese technocrats have, from time to time, engaged in derivative transactions, Brazilian-style, to hide the amount of dollar selling to support the renminbi. Beijing has also been stuffing non-liquid investments into its reserves. Those investments may be valuable, but they are not liquid and therefore should not be counted for this purpose.

Analysts assume China’s external debt of $2.05 trillion is only two-thirds of the country’s foreign exchange reserves. That assessment appears optimistic.

Third, stimulus at this late-cycle stage, even if Beijing had the cash, probably would not work. “Chinese authorities are aware that, because of their very limited channels of financial transmission, stimulus just leads to asset inflation—immediately,” Stevenson-Yang notes. “So they are trying to rely very heavily on administrative measures instead of cash injections. They are telling the banks to forgive loans, telling state-owned enterprises to pay basic salaries even when people are not employed, that sort of thing.”

And Chinese officials are ramping up the propaganda machine, always a bad sign. As Stevenson-Yang says, “The combination of stale old ideas and magical thinking is very sad for the Chinese people—they will not be getting relief and will have a very tough few years.”

In those tough years, China also faces new economic and financial challenges. Premier Li mentioned spending on the People’s Liberation Army will increase 6.6 percent. Many believe the real rate could be higher, but whatever the case it is evident the military is getting an outsized portion of the central government’s budget. In short, spending on the world’s biggest military will burden the world’s second-largest economy.

Also, many of the so-called loans for Xi’s Belt & Road initiative will come due in coming months, and some borrowers, with economies hit hard by COVID-19, cannot repay. Beijing has extended infrastructure loans to 126 countries, and in recent years has lent an astounding $520 billion to the developing world. Much of the lending is imprudent. China’s loans to Djibouti, for instance, equal 80 percent of the African country’s GDP.

And to make matters worse, factories are leaving Chinese soil, partially to avoid geopolitical friction and partially in response to commercial factors. China is bleeding manufacturing, and the hemorrhaging will continue especially when the Trump administration provides financial incentives for relocation. “We welcome any American companies in Hong Kong or China mainland, we will do what we can for full expensing and pay the cost of moving if they return their supply chains and their production to the United States,” said Larry Kudlow, President Trump’s top economic advisor, to Fox Business’s Stuart Varney on Tuesday.

So Trump is going after the heart of the Chinese economy. In response, Xi Jinping on Saturday promised China would not go back to a planned economy and would allow the market to take a “decisive” role. That sounded like a response that would keep companies in China, but he had made almost identical promises at the Third Plenum of 2013. After that meeting, Xi relentlessly steered China toward a state-dominated system in which the role of the market contracted.

China’s leader was able to get away with ideology-laden lectures and state solutions then, but that was before the coronavirus pandemic. His approach probably will not, in a far more difficult environment, work magic now.