Grading the Singapore Summit: Compared to What? 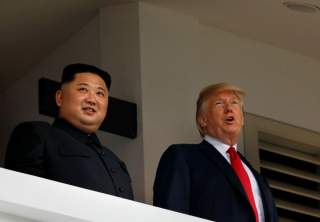 In the hyperpolarized state of American politics and policy debate, both critics and supporters of the Trump administration have become so predictable that they are now background noise. If required to summarize my assessment of the Trump-Kim summit in one line, it would be: oversold and undervalued. Despite their best efforts, his critics haven’t come close to matching Trump’s preposterous claim that “There is no longer a Nuclear Threat from North Korea.”

The critical test in assessing moves on the international chessboard is the question: “compared to what?” Against the bottom line of American national interests, how does the sum of what we just witnessed in Singapore compare to all the feasible alternatives?

Think back 510 days to the world before Trump. During their first meeting after the election, President Obama reportedly warned President-elect Trump that North Korea would be “the most urgent, alarming, and bedeviling threat you will confront.” At that point, there were three, and only three, possible futures. On the first road, both the U.S. and North Korea would continue doing what they had done for the previous eight years, and the eight years before that—North Korea advancing its nuclear and missile programs relentlessly, with occasional pauses, and the U.S. seeking, unsuccessfully, to persuade it to stop by tightening sanctions or promising economic relief. On the second road, the U.S. would attack North Korea before it acquired the capability to conduct nuclear attacks on the American homeland. The third road would require a “minor miracle” in which the two parties would somehow find an alternative to the first and second paths.

After the meeting at which Obama told Trump that North Korea stood on the threshold of a credible capability to strike the United States with nuclear-tipped intercontinental ballistic missiles (ICBMs), Trump tweeted: "it won't happen!" Since then, both publicly and in his most intimate meetings with his advisers, he has insisted that he would take the second road and attack North Korea—if this were the only way to stop Kim from succeeding on that first road. Secretary Mattis and the Department of Defense clearly dragged their feet in providing military options to Trump, always explaining carefully that the attack he was contemplating would likely produce a second Korean War in which tens or even hundreds of thousands of Americans could be killed. As Mattis testified to Congress on multiple occasions, such a war would be "catastrophic." But Mattis has provided a menu of military options to the commander-in-chief, and if Trump says "go," the U.S. military will execute the President's decision.

Fortunately, in an often bizarre and most unorthodox odyssey, President Trump and Kim Jong Un have started down the third road. Jointly pledging a “new future” of peaceful relations, they have established what Trump called “a very special bond,” a “terrific relationship.” North Korea has declared a moratorium on testing nuclear weapons and ICBMs, leaving it short of a reliable capability to strike the United States, and reiterated its commitment to “complete denuclearization of the Korean Peninsula.” In exchange, President Trump has pledged that the U.S. will not attack North Korea, suspended military exercises on the Korean Peninsula, and painted a picture of a prosperous, even rich North Korea.

The hard work of operationalizing North Korea’s commitment to denuclearize, and of actually dismantling and destroying North Korea’s huge nuclear enterprise, will require years of extreme effort. While Secretary of State Pompeo has stated his objective of “major disarmament” before the end of Trump’s first term, those who remember that we have seen this movie before—when Kim’s father and grandfather promised that they would denuclearize—are doubtful.

Nonetheless, if we ask "are Americans safer than we were before the Singapore summit," the answer is unquestionably yes. Indeed, every year that North Korea is negotiating, not testing nuclear weapons or missiles, and not selling nuclear weapons or weapons-usable material will qualify in my book as a continued movement down the path towards that "minor miracle." If contrary to all reasonable expectations, at the end of Trump's presidency, or even a decade or two ahead, the process continues, relative to the first and second paths, I will count this as a success. And if at the end of this rainbow, we find a pot of gold in a North Korea cleared of nuclear weapons, I will buy one of the condos that Trump builds on the beach.