A Grand Strategy for Trump 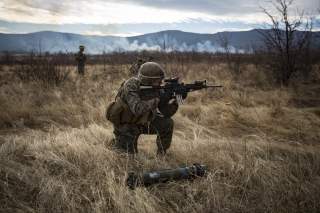 WHILE HE is well into the first one hundred days of his presidency, Donald Trump’s overall global strategy remains, in many respects, undefined. This is not unusual. His predecessors also took their time in establishing a worldview and a sense of direction, and often experienced internal strife. The Reagan administration was riven by doctrinal disputes over intervention between Secretary of State George Shultz and Defense Secretary Caspar Weinberger. The George H. W. Bush administration debated its approach to the Soviet Union at length. The Clinton administration agonized over whether or not to intervene in the Balkans. The George W. Bush administration entered office on the strength of a pledge to practice more humility, only to embrace a sweeping vision of ending evil after the attacks of September 11. And the Obama administration never fully came down on the side of either restraint or intervention, though midway through Obama’s second term it landed upon the ungainly term “leading from behind.”

At the same time, the lengthy and increasingly cumbersome process of nominating and confirming senior officials in the key departments also partly explains the Trump administration’s slow start, as does the complexity of working out an effective and efficient process for national-security decisionmaking. Competing power centers in the White House, coupled with Trump’s penchant for truculent tweets—including accusing China of “playing” the United States and Germany of manipulating the euro—have hardly helped, either.

In the case of the Trump administration, however, the “geoeconomic team” has made some real headway in defining a new approach for trade and investment: the Trans-Pacific Partnership has been dropped, the NAFTA agreement is under review, the adoption of a controversial border-adjustment tax is being studied, and a variety of legislative and regulatory proposals are being designed to attract more foreign investment.

In the geopolitical sphere, though, the same momentum is not evident. The administration does deserve credit for introducing its “hard power” budget estimate; Trump and his advisers clearly understand that a 9 percent increase in defense spending sends a message of credibility and seriousness to allies and adversaries alike. The president’s emphasis, in his early communications with European and Asian leaders, that U.S. allies must do more to share the burden of military spending appears to be paying off, even if they are not (at least in the case of Germany) moving as quickly as he would like.

But a bigger military for what? How does more hard power comport with a broader strategic vision? By anybody’s reckoning, a U.S. military buildup could form one part of an integrated strategy to create incentives for Russia to seek a more productive relationship with the West. Other steps are also important, including new approaches to finding a settlement in Ukraine, examining ways to cooperate in fighting ISIS, and addressing a new agenda of military threats and nonproliferation.

The problem, of course, is that any serious effort to work out a new strategy towards Russia has been paralyzed by a partisan and increasingly hysterical debate in Washington over what, if anything, the Trump campaign did to assist Russian hackers in intervening in the 2016 elections. The debate pits the Trump White House and its Republican supporters on the Hill against an unholy alliance of Republican hawks—John McCain, Lindsay Graham and Marco Rubio—and Democrats who want to blame Vladimir Putin for Hillary Clinton’s defeat, or at least exact a political price for it.

But as Henry Kissinger has correctly observed, “Demonizing Putin is not a strategy,” and the current Russiagate mania is deterring people from designing an agenda that could enhance both European security and U.S.-Russia relations. Consider the following.

First, if the United States gave up, at least for now, its twenty-five-year-old policy of turning Russia into a Western-style democracy, but instead focused on the external threats it poses, would a more politically secure Kremlin be prepared to respond positively?

Second, would a guarantee of nonalignment for Ukraine form part of an overall settlement? The Brookings Institution’s Michael O’Hanlon has proposed such guarantees to other “grey area” states, such as Moldova. The idea deserves serious examination.

Third, are there new approaches to nuclear arms control that make sense? Rather than simply limiting numbers of weapons, new developments—including new technologies, new doctrines for nuclear use and the apparent violation of core arms treaties—appear to make a deep discussion of nuclear issues a necessary part of any new U.S.-Russia dialogue.

IN THE Middle East, the administration also appears to be moving slowly, in this case because of the region’s fiendish complexity. Continuity, rather than change, from the Obama administration’s overall approach appears to be the order of the day. The fact that Obama’s policy in the Middle East gradually evolved towards greater realism makes Trump’s general embrace of this approach an encouraging sign. The result is that while President Trump has given priority to defeating ISIS as his regional policy and freed the military from the kind of constrictions that Obama’s micromanagement created, he seems to have only accelerated the existing battle plan. That does not resolve some important near-term issues in Syria, including how to keep Turkey engaged in the anti-ISIS struggle while continuing to work with the Syrian Kurds. Similarly, while the general goal of trying to cooperate with Moscow against ISIS is prudent in theory, credible, concrete forms of military cooperation have yet to be identified. But as far as the big picture is concerned, Trump’s national-security team does not appear at all interested in another Iraq or Libya. Regime change, democracy promotion and nation building have all been relegated to the dustbin. And while the Iranian challenge continues to loom, the administration has avoided taking any steps, such as abrogating the nuclear deal, that would make it any worse. In the case of Iran, with the departure of Michael Flynn, realism seems to prevail. This is significant. Trump has pursued a far more cautious course in charting the trajectory of American foreign policy than his critics—always ready to accuse him of being a bull who carries along his own china shop—seem ready to acknowledge.

Thus, if the administration can find a way to stabilize the relationship with the Kremlin, while also avoid getting bogged down in the Middle East—which its two predecessors were unable to accomplish—Trump will have the wherewithal to address the main challenge to American primacy in the twenty-first century: the emergence of China as a potential peer competitor. Trump quite sensibly appears to be pursuing an “Asia First” policy. Of course, Trump’s complaints about China are legion—it manipulates its own currency, it treats foreign investors unfairly, it steals U.S. intellectual property. Some of his complaints are valid; others are not. But it was refreshing that during his recent swing through East Asia, Rex Tillerson visited both Japan and South Korea—both important allies—before pitching up in Beijing. It was also important for President Xi, prior to visiting Trump in April at Mar-a-Lago, to hear directly about the importance of the North Korean nuclear threat. The administration is correct that the Chinese can be of more help on North Korea, but it may not understand that, in the end, Washington will need to get directly involved, including the possibility of Trump making a direct overture to Pyongyang—something that would jar sensibilities in the State Department, but might lead to real negotiations. Indeed, North Korea could be Donald Trump’s first big deal.

Regardless of how North Korea turns out, China, over the longer term, will increasingly challenge U.S. economic and political-military interests in the region. Pivoting with increased naval and air assets and building ties with regional powers like Vietnam and Indonesia will provide part of an answer. But a more global response will also be necessary. If the Trump administration can quietly develop different forms of strategic cooperation with diverse powers, such as Japan, Russia and India, China will get the message that it makes far more sense to cooperate with Washington than to confront it. As Graham T. Allison notes in this issue, it is imperative for the United States and China to avoid an unpremeditated war. The emerging strategic relationship between China and the United States has all the characteristics of the “Thucydides Trap,” in which a rising power challenges the dominance of a status-quo power. Indeed, Allison’s historical research indicates that more often than not it leads to war, an outcome that is far from being in the interest of either power.

Fearing this outcome, Robert Blackwill, in a March statement in the National Interest, firmly advocates a stark containment strategy for dealing with a rising China. Unfortunately, containment, on its own, would not be workable. Instead, if the United States were to adopt a Nixon-style détente model in the case of China, supported by an international collation of Japan, Russia and India, China would be offered a choice between containment and cooperation.

So that’s the “huge” opportunity available to the Trump administration. If it can weather the hue and cry over Russia and avoid another Middle East quagmire, the administration can construct a twenty-first-century equivalent of what Nixon used to call a “structure of peace”: a grand strategy of great-power balancing. If not, all bets are off.

Richard Burt, chairman of the National Interest’s advisory council, served in the State Department as U.S. ambassador to Germany, assistant secretary of state for European and Canadian affairs, and director of the Bureau of Politico-Military Affairs.