Gray Zone Politics: How Nepal Can Forge Partnerships with America, China and India 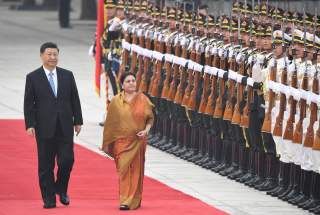 Recently, Chinese president Xi Jinping made his state visit to Nepal. During the visit, China and Nepal signed twenty agreements on topics ranging from connectivity to security. Through these agreements, Beijing promised around $500 million in economic grants to Nepal. Furthermore, China reinstated its commitment to build the Trans-Himalayan Multi-Dimensional Connectivity Network, which includes linking China to Kathmandu through Himalayan railways. On his part, Nepali prime minister KP Sharma Oli reassured his Chinese counterpart by expressing his support for China’s Belt and Road Initiative and promised that he will never allow any force to engage in anti-China activities from Nepali soil.

This ongoing Nepalese intimacy with China may raise some eyebrows in Washington. Earlier this year, during a meeting with Secretary of State Mike Pompeo in Washington, Nepali foreign minister Pradeep Gyanwali had walked away from the U.S. proposal of playing a “central-role in free, open and prosperous Indo-Pacific.” All these recent actions may be signaling that Nepal is choosing China over the United States, convincing some in Washington to rethink the ongoing American financial support to Nepal. American policymakers, instead of becoming myopic and asking Nepal to definitively “pick a side,” should instead focus on how Nepal, with its geostrategic location, can assist the United States in securing their long-term strategic interests in the region and build the bridges between Washington, Beijing and New Delhi.

How Can Nepal Assist the United States in the Region?

As the Trump administration has recognized, Nepal can indeed can play a crucial part in the Indo-Pacific region. Nepal sits in-between India and China, two very important countries for the United States. They are not good rivals for the United States, since all three countries often need to collaborate together to secure common interests. Nor are they necessarily good allies, trust is lacking when it comes to some issues. For instance, both the United States and India need to cooperate to counter any threats in the Indian Ocean, through which it has been estimated that around seventy percent of global oil shipments pass on their way from the Middle East to the Pacific. However, no matter how important India is for the United States, there is a limit to which Washington can collaborate with New Delhi. Take the relationship with Pakistan as a case in point: as long as the United States stays involved in Afghanistan, it will need Pakistani support either for containing the Taliban or making peace with them. For India, which has had tumultuous relations with Pakistan since the area’s partition in 1947, the Washington-Islamabad relationship—including U.S. military aid to Pakistan—is a sore point.

China, on the other hand, is America’s largest trading partner, with annual trade exceeding $737 billion. Beyond that, both countries need to work together when it comes to tackling the challenges of climate change, North Korean nuclear proliferation and other issues. However, the ongoing U.S.-China trade war, along with tensions in the South China Sea and other areas, has harmed the relationship between the two nations.

A deeper engagement with Nepal may provide a buffer zone for the United States in the region that may enhance Washington’s ability to negotiate with both Beijing and New Delhi. Additionally, as a politically neutral country, Nepal’s deeper engagement with the United States may enable Kathmandu to play the role of mediator in the future. This would be welcome if the need arises to deescalate any tensions in the region, similar to the role played by certain European states at the height of the Cold War. Neutral countries such as Finland and Sweden took the initiative to bring both NATO and the Soviet Union together for the Conference on Security and Cooperation in Europe and to negotiate Confidence and Security-Building Measures, which many scholars argue reduced the risk of war and encouraged reforms in the Soviet bloc. Thus, for securing sustainable peace and security of our time as well, we need states which are politically neutral and geographically relevant to contribute to promoting dialogue and Nepal in the Indo-Pacific region can play that role.

But Then Why Did Nepal Walk Away from the Indo-Pacific Region?

The Trump administration’s Indo-Pacific Strategy is problematic because it seeks to balance the rise of China by asking countries that are within China’s orbit to rally behind Washington. Many states in the region have fresh memories of the Cold War and will hesitate to take sides between Washington and Beijing. Nepal is no exception. For its own long-term national interest, Nepal needs to reassure Beijing that it will not allow any activity on its soil that may undermine China’s national security. To that end, in order to protect its own interests, Nepal cannot afford to simply “choose” between the United States and China.

However, if Washington would instead expand its engagement with Nepal while respecting Nepal’s political neutrality, Nepal would be in a position to assist the United States by bringing the powerhouses of the regions to negotiating table, should any tensions arise in the region that could quickly escalate. A far-sighted American foreign policy should focus on finding states like Finland and Sweden in the Indo-Pacific region that can play a role as a mediator between great powers. Such a focus on creating an international environment would be favorable to the long-term interests of the United States and of the world.

Sumesh Shiwakoty is a commentator on Nepali affairs. He frequently writes for The Diplomat, Asia Times and The Kathmandu Post. Previously, he worked with the World Policy Institute in New York and has received a research grant from the Andrew W. Mellon Foundation.