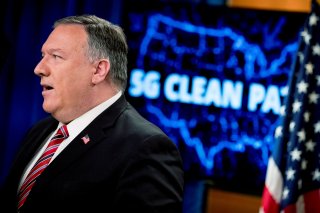 This week, my coworkers and I had an experience as common as it was disheartening: we tried to navigate Cisco WebEx. We had a meeting upcoming with government officials, who preferred not to use Zoom due to its security vulnerabilities. “WebEx is very minimalist,” my coworker observed wryly. That was an understatement. The platform lacked key features; it wasn’t a good faith alternative to Zoom.

This may seem like a mundane issue, but it has implications far beyond videoconferencing preferences. It is emblematic of a woefully inadequate government approach to some of the largest questions about what global digital architectures will look like in the decades to come.

The crux of the Zoom problem is that government officials recognize its security flaws and complain that much of its software was developed in China, but they haven’t pushed for the development of viable alternatives. And that’s happening across a range of technology industries, particularly with regards to Chinese competitors.

China has launched an aggressive bid to reshape the global digital ecosystem in its own illiberal image. Through the digital Silk Road, the Chinese government has poured tens of billions of dollars into gaining dominant footholds in telecommunications and Internet systems across the world. As its companies spread across the globe, they export China’s digital authoritarian toolkit, helping dictators spy on political opponents and build high-tech surveillance systems that resemble China’s security infrastructure at home. They collect data that is brought back to China and fed to domestic artificial intelligence systems. While the United States has done well to recognize the threat these developments pose, it has in many instances failed to offer viable alternatives.

Take the case of the fifth-generation mobile network, also known as 5G infrastructure. The Trump administration has spent the past two years trying to persuade allies that Huawei, the Chinese telecommunications giant and the leading supplier of 5G infrastructure globally, is a security threat. A handful of allies have belatedly come around to the argument. France is discouraging local telecommunications operators from using Huawei. Australia banned Huawei outright. The United Kingdom announced on Tuesday that it would do so, too.

Huawei U.K. spokesman Ed Brewster called the decision “bad news for anyone in the U.K. with a mobile phone,” threatening that Britain would be in “the digital slow lane.” Indeed, British officials admitted that the Huawei-ban would delay their rollout of a 5G infrastructure by two years.

U.S. officials have contended that there are viable alternatives to Huawei. Sweden’s Ericson and Finland’s Nokia both compete with Huawei in most third-party markets. Some U.S. and UK officials have pinned their hopes on South Korea’s Samsung and Japan’s NEC, though neither company currently has a significant 5G presence. Congress is mulling putting $750 million into researching open radio access network software that showed some results in Idaho.

But this breadth of alternatives fails to compensate for a lack of depth. While the Trump administration touts Ericson and Nokia as replacements for Huawei, it quietly tried to prod Cisco into buying one of them for fear that neither European company could truly compete. Nokia, in particular, has been losing global market share due to a bad bet on expensive chips.

As for government research of alternative 5G systems, they are a “pie in the sky,” in the words of Attorney General William Barr. “This approach is completely untested, and would take many years to get off the ground, and would not be ready for prime time for a decade, if ever,” he said of the open radio access network software. The U.S. has plenty of alternatives to Huawei, but no good ones.

The impact of a botched 5G policy will be far-reaching. Countries that roll out 5G infrastructure quickly and successfully obtain critical first-mover advantages in a range of cutting-edge technologies that depend on 5G technology. If the United States or its allies delay their 5G rollouts, they risk losing out in the competition to create many of the technologies of tomorrow. This is not to dispute security concerns about Huawei. The Trump administration has been right to challenge China’s global technological ambitions. But again and again, America warns of dangers without offering good alternatives.

A similar pattern plays out in other parts of the government response to China’s digital ambitions. In order to spread open digital rules globally and counter the spread of digital authoritarianism, USAID released a “digital strategy” this spring, focused on helping developing countries regulate the digital landscape. But even as USAID seeks to help developing countries build systems that protect their peoples’ data, its efforts are undercut by the lack of U.S. data protections at home. The European Union, by contrast, does have a framework for protecting data privacy—the General Data Protection Regulation—but USAID makes no mention of it.

“The absence of such a framework—and the associated perception that US tech firms can use the data they collect in ways that may harm consumers without fear of penalty—makes it harder for USAID (or any US agency) to make the case that the open model of internet governance it promotes will adequately protect people and communities from harms caused by the misuse of data,” the Center for Global Development explains in a review of USAID’s strategy. The U.S. has made the case that China’s illiberal Internet model is bad, but does not offer developing countries a compelling alternative model of Internet governance.

If policymakers are serious about countering China’s global technological ambitions, then they will need to step up America’s investment in its own digital infrastructure offerings. Too often, officials tout solutions that fail on closer inspection. Without viable alternatives, allies will spurn U.S. attempts to push back on China’s ambitions. When it comes to critical infrastructure like a fifth-generation mobile network, Webex-caliber systems will not cut it.

Coby Goldberg is a think tank researcher who writes about American foreign policy in East Asia. He has previously been published in The Forward, The Geopolitics, Technode, and ChinaTalk.