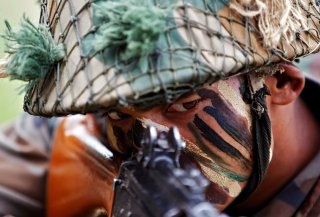 Yet the S-400 deal is problematic. The Pentagon fears that the purchase of the S-400 by India, as well as by NATO-member Turkey, would compromise the security of U.S.-fabricated weaponry. Washington has feared that the deployment of S-400 in both India and Turkey will permit Moscow to obtain information about U.S. radar cross-section and electronic emissions, for example. Unless waivers are granted, Washington has accordingly threatened to sanction states that purchase Russian defense systems—under President Donald Trump’s “Countering America’s Adversaries Through Sanctions Act” or CAATSA.

In essence, the United States wants India, Turkey (which also seeks to benefit from China’s BRI), and other states, to make a strategic commitment to U.S. technologies and platforms—and thereby recognize that American systems are interoperable and need to communicate with one another. The U.S. fear is that a country cannot place the advanced F-35 fighter jet near an S-400 (or integrate S-400s into U.S./NATO radar systems in the case of Turkey) without exposing high-tech U.S. secrets. Yet Moscow does not seem to possess the same concern with the S-400—as the latter is considered an export model. Moscow generally keeps its more advanced systems in reserve.

In an effort to bypass the threat of CAATSA sanctions, Delhi has considered making payments for Russian arms in euros to a Russia-nominated bank. Delhi has also hoped to establish joint ventures with Russia, and other foreign defense manufacturers, such as Israel, through the “Make in India” initiative. The latter initiative seeks to transfer technology for India itself to produce—as opposed to seeking to obtain licenses in which India would purchase the rights to manufacture all or part of a weapons system. These approaches open the door to Russia which is now offering joint ventures and collaborative research and development programs—with the option that India can produce advanced weaponry in India itself.

At the same time, Indian critics have charged that the S-400 could be made with faulty Chinese electronic parts and eavesdropping bugs given the fact that both Russian and U.S. military systems have adopted Chinese component parts. This assessment is based, in part, on a U.S. Senate subcommittee investigation in 2012, which found that eighteen hundred cases of fake electronic parts were being used in U.S. military aircraft, with nearly 70 percent of an estimated one million fake parts being traced to China.

By threatening CAATSA sanctions on India, the United States does not want to alienate Delhi. As an alternative to the more affordable S-400, the United States could offer to sell the overpriced F-35 fighter jet to Delhi. The Pentagon is dubiously boasting that the F-35 fighter jet represents the “only air platform that will be equipped and upgraded to beat the S-400” operated by China. (Beijing had obtained the S-400 from Russia in May-July 2018—thereby resulting in CAATSA sanctions on Chinese entities in September 2018.) The United States has also proposed to sell Delhi U.S. missile defense systems, such as the Patriot surface-to-air missile system, and the longer-range Terminal High Altitude Area Defense system, as incentives for India to dump the S-400 missile deal with Moscow.

The global alliance system is now at a turning point—as India could swing toward either the United States and its allies or toward the China-Russia Axis—as the three major powers battle for the political-military allegiance of India in addition to Iran, Pakistan, Iraq, Syria, Turkey, Venezuela and the Philippines, among other states. Given the integrated nature of high-tech defense systems, it becomes increasingly difficult for states such as “neutral” India to balance itself between the rival major powers. Washington, more so than Moscow or Beijing, wants to force states to align with the United States on the basis of a defense system interoperability that implies “you are either with our integrated defense systems or against us.”

The question remains as to whether Beijing’s incursion into Indian-controlled territory represents a sign of permanent hostility or else a show of force that is intended to “knock (India) to the negotiating table” while China promises to behave in a “principled” fashion—in Mao’s words at the time of the 1962 Indo-China border conflict in the exact same region.

On the one hand, if Beijing’s incursion is intended to “knock” India to the negotiating table, then Moscow might be able to mediate in the background so as to sustain good relations with both China and India, thus enhancing its strategic leverage with both countries—against the United States and its allies. If so, then this could solidify a burgeoning Sino-Russian Eurasian Alliance with India among other states, including Iran—that is, if Delhi ultimately accepts the promise of Russian arms and Chinese finance, investment and trade in the RCEP and the BRI, while both Russia and China promise to mediate the conflict between Pakistan and India through the SCO. (Here, however, the meeting of the SCO Heads of State Council, previously scheduled for July 21–23, 2020, in St. Petersburg, has been postponed—ostensibly due to the global “epidemiological situation.”)

On the other hand, if Delhi’s clashes with both China and Pakistan represent signs of permanent hostility, such an antagonism could press India to forge stronger ties with the United States, France, Australia and Japan, which has begun to accelerate its military build-up—against an encircling China-Pakistan-Iran alliance most likely at the expense of close Indian defense ties to Moscow. In addition to forcing India out of its “neutrality,” such a prospect will most likely force Moscow to strengthen its reluctant defense ties to China, leading to a formal Sino-Russian alliance—particularly if the Pentagon also deploys, in addition to missile defenses, intermediate-range ballistic missiles in the Indo-Pacific region—possibly in Japan. In mid-May 2020, the Trump administration purportedly proposed resuming U.S. nuclear weapons testing for the first time since 1992 as an additional bargaining chip to counter North Korean, as well as alleged Russian and Chinese, nuclear testing and modernization.

Both scenarios would represent geotectonic shifts in alliance networks that could further polarize the global disorder while encouraging nuclear weapons and missile proliferation in a new “Butter Battle” arms race.

Yet there is a third option: If the United States, Europeans and Japan can forge a rapprochement with Moscow after its annexation of Crimea and political-military interference in eastern Ukraine, then this could help draw Moscow away from reluctantly pursuing a closer defense alliance with Beijing—in which China hopes to boost its power potential and expanding blue water naval presence in the Indo-Pacific region with Russian backing—in the ultimate effort to isolate and pressure Taiwan into unification, by force if necessary.

A U.S.-European-Japanese rapprochement with Moscow should not be designed to “encircle” and “contain” Beijing. Such an approach should instead lead toward a Russo-Japanese rapprochement in the aftermath of Abe’s meeting with Putin in May 2016. In effect, Japan and France—backed by the United States—could mediate between the G-7 countries and Russia and help forge diplomatic compromises involving joint U.S.-Japanese-European-Russian-Chinese-Indian development projects with regional states. Such an approach could also support joint internationalized security accords over a “neutral” Ukraine and over the South and East China Seas and Taiwan. Also, at the same time, it would seek to improve Indo-Pakistani-Chinese relations in Kashmir, Afghanistan, Tibet, and elsewhere.

In August 2019, Trump offered to help “mediate” or “assist” India and Pakistan over Kashmir. In June 2020, Trump offered to mediate between China and India. Yet neither India nor China picked up on the offer—in large part because Trump’s highly mediatized form of personal diplomacy could further antagonize those conflicts—much as Trump’s approach has antagonized North Korea.

Nevertheless, in order to prevent future clashes in the Indo-Pacific region from going nuclear—as was almost the case for the Kargil crisis in Ladakh between India and Pakistan in May–June 1999—it is crucial for Washington to support G-7 and UN-backed Contact Group diplomacy aimed at dampening these seemingly intractable disputes.

Given that the United States, Russia and China have begun to forge rival alliance networks, an even greater conflict could easily explode in the near future—in that the very threat of states to shift alliances or even move into neutrality—can provoke major power war in an increasingly polarized global disorder.