The Great Paradox of Donald Trump’s Plan to Combat China 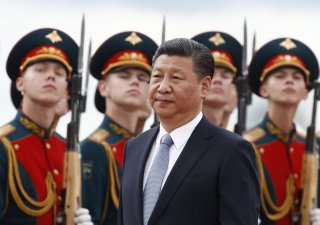 Secretary of State Mike Pompeo spelled out clearly his case for overestimation in his speech of the Nixon Library on July 23, 2020. “We’re seeing staggering statistics of China trade abuses that cost American jobs and strike enormous blows to the economies all across America, including here in Southern California,” Pompeo said. “And we’re watching a Chinese military that grows stronger and stronger and indeed more menacing.” One could be forgiven for believing that China is about to mount a military invasion of the United States. Yet, there is no doubt that in the military field, the United States is much stronger than China. In his speech, Pompeo said, “We’ve called on China to conform its nuclear capabilities to the strategic realities of our time.” If China heeded his call, then it would have to add over fifty-five hundred nuclear weapons to its stockpile since it only has over three hundred weapons, compared to almost six thousand for the United States.

Pompeo also declared that the Chinese Communist Party (CCP) was exploiting America’s “free and open society” and “sent propagandists into our press conferences, our research centers, our high-schools, our colleges, and even into our PTA meetings.” In short, Chinese agents of influence have infiltrated all segments of American society and could undermine it. The most telling word Pompeo used to describe the CCP was “Frankenstein.” This word implies that a monster was now threatening America. It would be reasonable for an American to feel scared after hearing the speech.

Yet, even though the recent speeches on China by Trump administration officials have been strident, they ultimately underestimate the challenge posed by China because they fail to realistically explain its nature. Pompeo makes it clear that it is the communist ideology of the CCP that is threatening America: As he said, “General Security Xi Jinping is a true believer in a bankrupt totalitarian ideology. It’s this ideology that informs his decades-long desire for global hegemony of China communism.” If global hegemony was indeed China’s goal, then Americans can relax. Any such ambition of global hegemony will fail. The world will reject it.

The CCP is actually a far more formidable competitor to America because its primary goal is not global hegemony. It is to revive the world’s oldest and most resilient civilization and restore its natural place as the most successful civilization for most of human history. And the CCP is doing a very good job at this process of revitalization. One little known fact about the CCP is that since its creation in 1949, seventy-one years ago, this is the strongest it has ever been.

A Harvard Kennedy School Ash Center study titled “Understanding CCP Resilience,” published in July 2020 explains why the CCP is so popular in China. “Regime theory has long argued that authoritarian systems are inherently unstable because of their dependence on coercion, over-centralization of decision making, and the privileging of personal over institutional power,” according to the report. “Over time, these inefficiencies tend to weaken the legitimacy of the ruling government, leading to generalized unrest and citizen dissatisfaction.” This is what should have happened in China. Instead, as this report says that “the Party appears to be as strong as ever. A deeper resilience is founded on popular support for regime policy.” This is why the report concludes that “there is little evidence to support the idea that the CCP is losing legitimacy in the eyes of its people.”

Pompeo was also underestimating and misunderstanding the Chinese challenge when he spoke of the distinction between the CCP and the Chinese people. He said, “We must also engage and empower the Chinese people—a dynamic freedom-loving people who are completely distinct from the CCP.” Here are some important statistics. Each year over twenty million Chinese apply to join the CCP. About 12 percent of them get in, making it as difficult to join the CCP as it is to get into leading universities in America. In short, the CCP is not a party about to crack up under American pressure: it is floating on an ocean of legitimacy among 1.4 billion Chinese people, who are now happy as they are experiencing a new high tide in the history of Chinese civilization. The 2020 Edelman Trust Barometer reports that 90 percent of the Chinese people support the Chinese government.

All this explains a key weakness of the American strategy towards China. No country, with the possible unwise exception of the current Australian government, has jumped on to the American bandwagon as it rushes to confront China. Not even close allies like the UK. One influential British figure noted in Davos in January that the UK would proceed to install 5G technology from Huawei as British Intelligence agencies had thoroughly scrubbed the Huawei software. He confidently asserted that the United States could not arm-twist the UK as the United States needed the UK as much as the UK needed the United States. By July, the UK had capitulated. One can only imagine the arm-twisting that took place. What a contrast to the Cold War when the UK and the United States were complete comrades-in-arms.

The Trump administration is right on one point. There are rising levels of concern around the world on the new assertiveness displayed by China from the “wolf-warrior” diplomats in Europe to the killings of the Indian soldiers in the Himalayas. An intelligent and thoughtful American strategy that tried to balance Chinese assertiveness by developing a wide network of friends across the globe could work. Instead, as Richard Haas says, “under this administration, we treat the European Union as an economic foe, bash South Korea and Japan . . . it is not realistic to expect allies to stand up to a powerful neighbor if they cannot count on us.”

If the Trump administration or the United States is serious about taking on the Chinese challenge, it needs to do a complete reboot and work out a thoughtful long-term strategy. It should also heed the advice of its previous strategic thinkers in trying to understand the real nature of the CCP. As George Kennan said, “Our first step must be to apprehend and recognize for what it is, the nature of the movement with which we are dealing. We must study it with same courage, detachment, objectivity, and same determination not to be emotionally provoked or unseated by it.”

Kennan also advised that the United States should adopt the virtues of “modesty and humility.” These virtues are absolutely critical if the United States is to develop a deep and realistic understanding of the enormous challenge posed by China.

Kishore Mahbubani is a professor in the practice of public policy at the National University of Singapore and the author of Has China Won?