Great Power Competition After the Coronavirus Crisis: What Should America Do? 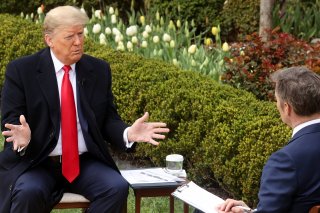 Sooner or later, the world will bend the curve on the coronavirus, and the great power competition will pick up where it left off. The time to start assessing what that means for U.S. foreign and security policy in a post-pandemic world starts now. Washington ought to turn its attention first to those parts of the world most vital to U.S. interests.

The Greater Middle East: This region is the single biggest wild card in global affairs. There is just no telling how ravaged Iran will be. We still don’t know how aggressively the virus will spread throughout the region, the damage it will do, or how severely it will destabilize already precarious situations.

Here the recently lightened U.S. footprint could play to Washington’s advantage. It worked out in Syria, where the administration largely avoided getting sucked into a quagmire. For now, at least, Syria’s problems remain in Syria. Neither Russia nor Iran are in a stronger position than when they started their own interventions.

But now is the time for the U.S. to build a sustainable framework for Middle East security, trade and conflict resolution. No matter what chaos COVID-19 rains down on the region, Washington must have the architecture in place to help implement appropriate responses.

Iran remains the primary source of disruption here. Regardless of what happens, the U.S. must keep the sanctions regime—including the embargo on weapons sales—firmly in place. The best hope for a sustainable, long-term resolution of the world’s Iran problem is to pressure Tehran back to the table for a responsible deal.
Washington also must guard against a resurgence of transnational Islamist terrorism. Evil movements thrive in mayhem. Distracted and inadequate governance, diminished public safety and declining economic freedom can fan the flames of extremism. U.S. can’t back off on proactive, attentive counterterrorism operations.

Indeed, America’s attention must extend south into Africa—and not just because of counterterrorism worries. Chinese influence can undermine this region’s already weak governance, retarding progress toward economic freedom. Here, the U.S must evolve from a military-centric counterterrorism strategy, developing a more sophisticated and attentive plan to protect U.S. interests and keep North Africa’s problems from spilling over into the Middle East and Europe.

Europe: A Europe that is whole, free, prosperous, and at peace remains a vital U.S. interest. Let’s be plainspoken: Europe it taking a massive hit from COVID-19, which will make solidarity in the Transatlantic Community more important than ever.

The U.S. must double down on doing its part. Europe will not be able to bounce back alone. America is the only global partner that can really deliver and that Europe can trust. It’s time to get past not liking Trump’s tweets.

The to-do list will be lengthy. Job one has to be inking a free trade pact with the UK asap. And the EU isn’t going anywhere; even COVID-19 won’t kill it. The U.S. and the EU will have to learn how to work better together. There are a number of issues we need to address jointly—problems like Huawei, the Western Balkans, the Three Seas Initiative and Russian meddling. We also need to get US-German relations back on track—particularly in regard to defense policy.

Indo-Pacific: Beijing has launched a PR blitz to deflect attention from its fatally flawed handling of the COVID-19 outbreak. But no amount of spin can alter the reality that the Chinese Communist Party’s brand—as well as the Chinese economy—has taken another body blow. The latest round of propaganda is so ludicrous, it smacks of desperation born of weakness.

But we must be realistic. COVID-19 is not going to bring Beijing to its knees nor dampen the regime’s desire to undermine American power. And notions of a “hard decoupling” from China are equally unrealistic. Ultimately, the U.S. will have to pick up where it left off, taking a hard-nosed, practical approach to U.S.-China relations that forces Beijing to respect U.S. interests over the long-term. If anything, the U.S. should get tougher with China in policy areas where Beijing continues to cross the line—from intellectual property theft to predatory business practices and offensive and mendacious public diplomacy.

Meanwhile, who knows what is going on in the Hermit Kingdom? Pyongyang hasn’t told the outside world much of anything about anything. There seems little practical alternative to the status quo--just continue to pressure the regime and hope it leads to more fruitful talks in the future.

America: Job 1, of course, is to get America up and running again. That requires getting ahead of the pandemic. Given the state of the economy and the federal budget, the other massive challenge is to make sure that Washington refrains from gutting the critical instruments of national power needed to exert influence in the world. We must maintain the right mix of hard and soft power. And if we want to steal a march on our great power competitors, we’ll need to get our economy up and running faster and better than they do.