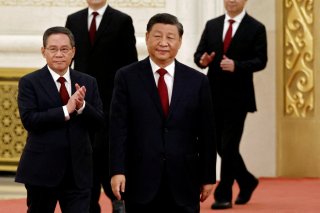 The more that the Chinese Communist Party (CCP) consolidates power under Xi Jinping, the more fragile it becomes, exposed by the vacuum that would appear if Xi was absent from power. Xi Jinping has, in effect, created a sycophancy, evidenced by his new premier, Li Qiang. Li was rewarded for not giving in to the intense and visible dissatisfaction over severe lockdowns in Shanghai while he was mayor that went viral on YouTube. If sycophancy were an Olympic event, Li would win an undisputed gold medal. His promotion for his loyalty sent a powerful message about who would be rewarded under Xi’s lifelong leadership. However, it’s a crushing blow to those with divergent opinions.

After the conclusion of the party festivities, when Xi presented his cadre of loyalists to the awaiting press, those selected were friends with old family ties and ideologues who assist Xi with internal politics. For example, Wang Huning is known for his theories on authoritarianism, and also believes in strong central leadership. Cai Qi, the Beijing party secretary, was a surprise entrant to many, but he demonstrates how Xi values loyalty through people who have come up through the ranks to support him. He has worked with Xi for more than 20 years. Others who were potential rivals, like Li Keqiang, were sent packing.

The production and encouragement of loyalists and sycophants are bad for China, as it creates a lack of diversity of opinion among senior leadership. In the past, submissiveness has produced some of the most tragic events in modern Chinese history: the famine of the Great Leap Forward, which killed as many as 30 million people, and the Cultural Revolution, a brutal attempt by Chairman Mao Zedong to assert control and inflict cruelty upon untold masses of innocent people.

The position of Chairman of the CCP was abolished in 1982 because the leadership wanted to ensure that no one would rise above the party. However, Xi has done exactly that, and, in so doing, more disasters will follow. In the past, these man-made tragedies were propelled by what is a “red” versus “expert” struggle within the CCP. The expert view was a more pragmatic approach championed by Deng Xiaoping, which prioritized results over ideology. The red view championed by Mao sacrificed economic growth in the name of revolutionary purity. Mao’s death in 1976 was a relief to many, but in 2022, Xi Jinping may have created another bastardized red phase where loyalty to the party must be equated with loyalty to Xi himself.

Xi’s system of loyalty and rewards can only work in China. Outside of it, Japan and Australia, on the same day as the CCP’s 20th Congress, signed an agreement to increase military cooperation aimed at containing China within the Asia-Pacific region. This, in conjunction with a group, newly called the Partners in the Blue Pacific (PBP), consisting of the United States, Japan, Australia, New Zealand, and the United Kingdom aims to boost economic and diplomatic ties with Pacific Island states, again aimed at countering China’s growing influence in the region. These agreements are proof that Xi Jinping will not be able to contend with the international community in the same fashion as he has dealt with his domestic political rivals.

It is on the home front where open dissent is working against Xi’s sycophancy. Chinese people are reacting to declining wages, increased working hours, and lower labor participation rates among youth. These socio-economic problems are exacerbated by expositions of corruption within the CCP. In his speech on the 100th anniversary of the CCP, Xi noted that China needed to “root out any elements that would harm the Party's advanced nature and purity and any viruses that would erode its health.” This mentality merely confirms a hard truth that such purity is a priority over efforts to remedy China’s critical problem areas.

China’s economy, critical to Xi’s grip on power, was slowing even before the COVID-19 pandemic, and policies enacted over the past three years have only heightened the reality that the country is stuck in a middle-income trap. By not freeing markets and stifling the technology sector, Xi has expanded China’s problematic state-owned enterprises. Worse, there are no indications that China is taking decisive steps to stop a housing market collapse that has been developing for more than a year after China Everglade Group announced that it was under “tremendous pressure” and would not be able to pay back debts exceeding $300 billion. Home prices have plummeted every month since then.

Worse, among some segments of China’s youth, the expressions of “lying flat” and “let it rot” have gained traction. These expressions suggest that the political and economic environment has been tempered to the point where voices are suppressed and the expectations of youth have been dramatically lowered. This has inspired a counter-culture, where youth are more content with quality of life instead of the pressures associated with a tight labor market and pressures to work hard during grueling work shifts for material gains. To lie flat is to release oneself from the crush of modern life where competition is intense. However, for Xi and CCP leadership, this passive resistance to a national drive for economic development should be troubling and is contrary to national ambitions in his “New Era”. When the body politic is passive when action and initiative are called for allows solvable problems to fester. This is a common problem with autocratic rule.

Coinciding with Xi’s third term in office is a demographic crisis of epic proportions, which will see China’s population shrink from 1.44 billion today to under 800 million by 2100, which will severely hamper efforts to stimulate growth and swiftly manage national economic problems. China is only now taking advantage of a so-called “demographic dividend” now curtailed by multiple economic crises. With China’s youth disappearing, it will be India, its regional rival that will reap the dividend by 2050, when they will have an estimated 300 million more people. Worse, marriage rates in China have fallen to an all-time low.

While protests and expressions of anger and dissatisfaction will not likely bring down China’s autocratic society, their presence does mean that there are large segments of society that are underinvested and under-motivated to preserve it. Xi Jinping did everything in his power to be anointed to a third term, but at this point in China’s trajectory, it is not without reason to suggest that his forceful power grab will result in misdirection and disaster, as there are no dissenting voices left to warn him of calamities of his own making. The nurturing of sycophants could be his undoing.

Paul Scott is a Japan-China specialist and democracy activist who is currently teaching in the Graduate Program in Peace and Conflict Studies at the Universitat Jaume I, Castellón de la Plana, España and at the Catholic University of Lille, France.

Mark S. Cogan is an associate professor of peace and conflict studies at Kansai Gaidai University based in Osaka, Japan and a former communications specialist with the United Nations.