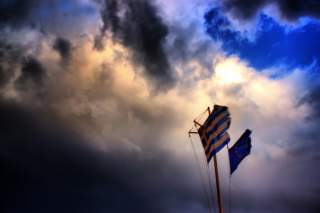 Greeks will go to the polls on January 25. The outcome may lead to debt repudiation, other severe losses on assets and the beginning of the end of the common currency. Even if Europe avoids the worst, the best anyone can hope for is heightened levels of uncertainty. It is not a pretty picture, and the blame for this mess is so widespread that it would take a book just to name the people and institutions responsible.

The Story So Far

Greece has for some time occupied the epicenter of Europe’s troubles. It was, after all, Athens that in 2009 triggered the continent’s still-raging fiscal-financial crisis by admitting that it had fibbed about its financial health. Since, Greece has received two European Union (EU) bailouts, totaling €240 billion, each conditioned on budget austerity and other economic reforms pressed by the EU, the European Central Bank (ECB) and the International Monetary Fund (IMF)—the so-called Troika. These reforms included measures to privatize government assets and steps to make the economy more dynamic and competitive through labor-market and regulatory reforms. Greece has stuck to its promised budget austerity, though not without considerable angst and political close calls. Though Troika monitors remain disappointed about other reform efforts, they had pretty much concluded that Athens had come far enough to emerge from bailout strictures. The country’s budget had, they noted, balanced and the economy was beginning to grow, albeit haltingly and from a deep recession.

But crisis has found Greece again. This latest phase arises from a quirk in Greece’s political process. The largely ceremonial position of president is vacant. Prime Minister Antonis Samaras of the new Democracy party—which is center-right, pro-austerity and pro-cooperation with the Troika—put forward Stavros Dimas for the post. Normally, this would have been a political non-event. Dimas ran unopposed. But the left-leaning, anti-austerity Syriza party, then leading in the polls, realized that a failure to get sufficient votes would trigger a general election. It worked with other opposition parties, including the far-right and actively anti-Europe Golden Dawn party, to vote down Dimas. Prime Minister Samaras had to call an election. Perhaps because Syriza’s lead in the polls had by then narrowed, he decided on an earlier, rather than a later date. Now this quirk has raised the chance of an anti-austerity coalition coming into power in Athens and with it, possibly an end to Greek cooperation with the Troika, even an end to Greek membership in the common currency.

It is entirely possible that Samaras will return to office. Syriza’s lead has already shrunk from double-digits not too long ago to only three percentage points according to some polls, well within their statistical margin of error. But even with a Samaras victory, uncertainties would remain. No doubt chastened by his defeat in the presidential poll and by the need to have called an election, he could easily show a greater willingness to soften austerity policies and delay other reforms still longer. Europe, in time, might find him and his new coalition much less cooperative than he or it once were. And this is the most stable and predictable of the potential environments that could emerge from the Greek vote.

A Syriza victory, with its volatile leader, Alexis Tsipras, as prime minister, would open a myriad of possibilities, and there is no way to know what sort of agenda he might put in place. Over the last couple of years, he has talked out of so many sides of his mouth that Greeks going to the polls later this month really cannot know for what or against what they are voting. When Syriza first gained popularity, Tsipras expressed unrestrained hostility to Greece’s membership in the euro and argued that Athens should repudiate much of its debt. More recently, he has softened his resistance to euro membership, though he still espouses a determination to tear up the austerity conditions imposed by the Troika. His current position on debt repudiation remains ambiguous.

Against such a backdrop, the election promises anything from an ambiguous moderation in Greece’s playbook all the way to an exit from the common currency, what journalists in the early days of the current crisis referred to as a “Grexit.” It is little wonder, then, that markets quickly upped the interest rate charged on Greek borrowing from about 5.5 percent a few weeks ago to 9.5 percent right after the election was called.

Possibilities: Some Helpful, Most Destructive

For the Greeks, these more extreme possibilities could cut two ways. On the positive side, an exit from the euro and a return to a depreciated drachma would aid growth by making Greek goods and services cheaper to the rest of the world and accordingly more competitive. Debtors within Greece would benefit, too, having the ability to discharge their obligations in a currency much depreciated against the euro. On the negative side, such a prospect would destroy wealth. Greek savers would see the global purchasing power of their assets drop with a drachma depreciation, whatever initial conversion rate the government determined.

For those holding the outstanding overhang of euro-denominated Greek debt, the matter could get even more complex. An outright repudiation would, of course, bring complete losses to lenders, most directly to banks elsewhere in Europe and indirectly to anyone who holds equity in or the debt obligations of these European banks. That would include many American financial institutions and investors. A rescheduling of the debt, perhaps by lengthening maturities or arbitrarily reducing the stated interest payments, would cause less-drastic immediate losses, but losses nonetheless. These hardships would occur whether Greece stayed in the euro or exited, though it is an open question whether the rest of the eurozone would allow Greece to remain in the common currency after repudiating its debt or unilaterally rescheduling it.

An exit from the euro would add still more complications. Greece could return to the drachma and still honor its euro debt, though the government would face a great burden in doing so, since it would take a lot of depreciated drachmas to meet those euro obligations. It is possible, if not especially likely, that Greece could exit the euro and insist on rescheduling the outstanding debt in drachma, imposing a huge loss on lenders, though not as much as with outright repudiation. No doubt such a move would create international lawsuits and take years to resolve. In any of these possibilities, Greece would find it much more difficult and expensive to borrow on international financial markets, especially with a return to the drachma, for then lenders would insist on a special premium to protect them against possible future currency losses, certainly a greater premium than they would demand with euro-denominated debt.

In one respect, Greece can matter only little to Europe or the eurozone. It is too small to threaten the basics of either European economics or finance. Its gross domestic product (GDP), at the equivalent of $243 billion in 2013, is not even a fifth the size of Spain’s, only slightly over one tenth the size of Italy’s, and barely over one twentieth the size of Germany’s economy. Its outstanding debts amount to only 1.0 percent of all European bank assets. It would not be a happy day if those Greek assets were to become worthless, but it would hardly become the stuff of a financial catastrophe. The financial system would remain no less sound than it is presently and Europe’s economy might even look marginally stronger with Greece gone.

But in another respect, a Greek exit or debt rescheduling could have serious ramifications by pointing up alternatives for other beleaguered members of Europe’s periphery. Any debt repudiation, with or without an exit from the common currency, could tempt other heavily indebted nations to follow suit, entirely or partially, as a way to ease their immediate burdens. Even if Greece were to take no more drastic a step than to renegotiate the austerity strictures of its bailout, others might ask for similar concessions. Granting them would undermine EU efforts at control and delay the continent’s return to overall financial health. It could also erode critical German support by putting the lie to the promises Berlin gave to convince German taxpayers to bankroll the bailout. And if Athens were to withdraw from the euro, questions about the ultimate viability of the common currency would grow, complicating any efforts at financial healing and making it that much more difficult to keep up this experiment.

To assess which of these directions is likely is clearly impossible at this juncture. What is clear is that for the foreseeable future, Europe will labor under more uncertainty than previously and with three prospects: (1) Greece will continue for some time to pay considerably higher borrowing rates than it did just a few weeks ago, something that could, in time, undermine some of the budget gains the country has made, even if in the interim Athens holds to its austerity promises; (2) to the extent that Greek intransigence grows, fears over a general turn in this direction elsewhere in Europe’s periphery will tend to raise borrowing costs there, even if these governments make no overt statements or actions to step away from austerity; (3) prospects for the eurozone will remain ever more doubtful than in the past, weighing further on the euro’s value and making it still more difficult than it already is for the zone’s leadership, particularly at the ECB, to plan or otherwise conduct its business effectively.