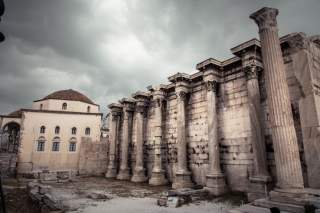 The January 25 election for control of Greece’s 300-seat parliament has implications well beyond the borders of the Mediterranean country of 10.7 million people. In many regards, Greece is a laboratory for the rest of the European Union (EU), in particular the nineteen countries that constitute the Eurozone.

The core issue for European policy makers and their counterparts in Athens is how to reconcile the dual needs of honoring debt obligations and structural reforms with the necessity for economic growth, indispensable to reducing high unemployment and improving the standard of living. Directly related to that is an increasing sentiment in the Eurozone that the grand experiment of a single market and currency is eroding democracy, as decisions made in Brussels are imposed largely by unelected officials without consideration of their harshness or unpopularity. The question hanging over Europe is painfully simple—are Europeans better off now after several years of austerity than before 2010, the beginning of the European sovereign debt crisis?

The answer to that question appears to be “no.” Economic growth has been elusive, actually contracting 0.4 percent in 2013, before making an anemic recovery of 0.8 percent in 2014. Deflation is a major worry, with December’s consumer prices (according to Eurostat) being -0.2 percent.

Unemployment in Greece and Spain exceeds 20 percent; it has recently hit record highs in France, and Italy’s unemployment remains stubbornly above 10 percent. What is worse, youth unemployment hovers between 40-60 percent in several countries, making the outlook for a rapidly aging population even bleaker.

For many Greeks, Spaniards, Italians, Cypriots and Portuguese, Brussels (dominated by Germany and a handful of northern European countries) has too much power in dictating harsh economic terms. Those terms are rooted in the view that it is not wise to live beyond one’s means, belt-tightening is sometimes necessary and northern taxpayers have limited patience with overleveraged southern Europeans. While tough structural reforms have recently worked for countries such as Estonia, Latvia and Ireland, the association in the minds of many other Europeans is that membership in the euro club brings pain, not gain.

Greece is a flashpoint in the debate over Europe’s future. The country was at the center of the European sovereign debt crisis, requiring two bailout packages (2010 and 2012) worth 240 billion euros from the Troika (a combination of the EU, the European Central Bank and International Monetary Fund). In return for that assistance, Greece agreed to a radical economic restructuring, encompassing drastic cuts in pensions, social spending, and state worker personnel rolls. It also included the privatization of state assets and measures to improve the collection of taxes.

While the Troika’s program prevented a Greek default and helped stabilize financial markets, it put the country’s debt to GDP level at 176 percent in 2013, one of the highest levels in the world. The harshness of the Troika medicine pushed the Greek economy into a steep recession, with real GDP contracting by over 20 percent in the 2009-to-2013 period. Unemployment skyrocketed and has remained brutally high, at 25.7 percent in October. It was only in 2014 that the economy managed to return to growth (of around 1 percent).

The reforms have made Greece more competitive and able to better live within its means. According to the Bank of Greece, the economy is expected to grow by 2.5 percent in 2015. The Samaras government’s reforms also led to a considerable improvement in Greece’s fiscal situation. However, economists Barry Eichengreen and Ugo Panizza recently noted that Greece would have to run an annual primary budget surplus (before interest payments) of 7.2 percent until 2030 to approach the Eurozone debt/GDP target of 60.0 percent of GDP. This is not likely to happen.

Greece’s bailout program was supposed to conclude by year-end 2014. However, in negotiations in December, the Samaras government and the Troika failed to reach an agreement. The latter indicated additional spending cuts in the form of another pension cut and an increase in the Value Added Tax of 2.5 billion euros would be required for the government to hit its targets required to release aid. A final decision between the two parties was deferred for early 2015.

The situation was complicated by a Parliamentary vote initially scheduled in late February for the Greek presidency. The Samaras government moved the vote up to December 2014, gambling that its candidate would win, because a failure would trigger new parliamentary elections. If this happened, the major opposition party, Syriza (Radical Left Coalition), stood a good chance of winning and could possibly take Greece down the road to default. The gamble failed and a snap election was scheduled for January 25.

What has elevated Greece’s election into a European event is that Syriza, led by Alexis Tsipras, is leading in opinion polls. The party favors an end to the austerity measures that are part of the current EU/ECB/IMF bailout package, renegotiation of Greece’s debt (asking for an outright haircut on Greek public debt from its European peers), an end to the privatization of state assets (and reassessment of previous sales) and a continuation in the government’s stake in Greece’s largest banks, as well as the creation of a state investment bank. The new government would move to “tackle” the oligarchs, a group of politically well-connected businessmen, highly represented in the domestic media, state procurements and real estate.

A Syriza administration would also implement a sweeping new social-spending program that entails subsidized electricity and transport, food stamps for families living below the poverty line and free healthcare for the unemployed. Tsipras asserts that there will be no need for new borrowing to fund the program, because after a sovereign debt write-down, Greece will not need to sustain an excessively high primary budget surplus.

Tsipras, therefore, wants an electoral mandate to undo many of the structural reforms, aggressively cut the country’s debt burden (at a cost to other European countries) and keep Greece in the Eurozone. In a sense, he wants to roll back the clock to 2009, the period before the crisis in which the EU paid for Greece’s “lifestyle.” To those countries that financed the Greek bailout, this smacks of a return to the same old practices that got Greece into trouble in the first place—with them paying for another round.

Who will win on January 25? The election is likely to be very close. Based on opinion polls, Syriza will probably win the most seats, but fail to gain a clear-cut majority. This will force it to turn to other parties to form a coalition. An alliance with the conservative ND is not likely, nor would Syriza turn to the neofascist Golden Dawn. That leaves the centrist, pro-European Potami party, the Communists (KKE) and two possible socialist parties (which are struggling to poll above 3 percent). Any of these would complicate Syriza’s ability to fully implement its agenda.

Another option is for an ND victory (they are polling in second place), which would set the stage for another coalition under Samaras, possibly with the centrist and pro-European Potami Party. If this were to occur, the potential for crisis would diminish, though the debt issue would not entirely going away. Finally, there is a good chance for a hung parliament, in which no single party has enough seats to form a government, leaving Greece in the hands of a caretaker regime for three months before the next round of elections. Such a development would be highly negative for the Greek economy and is not desired by the Greek public, which is already disinclined to more elections.

If Syriza wins, Tsipras is likely to move quickly to open negotiations with the EU, but in particular with Germany and France, the heavyweights within the Eurozone. The Syriza leader has worked hard to make Greece’s issues of too much austerity, an unrealistic debt burden and the need for economic growth into a broader European debate. A lot of people in Europe have felt the pain of economic hard times, and he is reaching out to them with the message that there has to be a better plan than the one Europe is following.

Germany, in early January 2014, indicated the possibility of a new loan of 10-20 billion euros to help cover the southern European country’s financing gap. Although this was “leaked” to the German weekly Der Spiegel, Berlin could be signaling a softer approach to avoid a breakdown in negotiations even before they start. At the same time, Germany has denied that there is any consideration of further debt restructuring.

The risk looms that both a Syriza government and the Germans prove inflexible. This scenario could see a Greek default, followed by a disorderly Greek exit (the “Grexit”) from the Eurozone, probably pushed by other countries that believe that the zone’s economy and banking systems are strong enough to accommodate such a shock. The impact on Greece would initially be devastating, but the rest of Europe would not be unscathed.

Such a development would hit international financial markets, due to contagion concerns and complicate market access for Italy, France, Spain, Portugal, Greece and Belgium, which, according to Bloomberg, collectively need to raise close to 1 trillion euros in 2015. A messy Greek crisis has the potential to quickly become an international financial crisis. Even if the ECB is able to implement its much-discussed quantitative easing program that includes the buying of European sovereign debt, a Greek storm could be beyond its ability to contain the crisis.