Is Greece Really On the Verge of Another Financial Crisis? 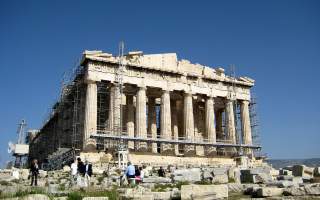 Just about every adult on earth has seen this show before. Greece faces a debt repayment that it cannot meet: for this performance, €86 billion due in July. It needs fresh bailout funds from the European Union and/or the International Monetary Fund because borrowing directly on global capital markets comes at too high a cost—10 percent to replace the maturing bonds. Germany, leading the EU, states that before Greece receives a single euro it must first commit to more severe budget policies. The IMF points out that Greece cannot possibly live up to Germany’s demands, and even if it did, the country would not be able to repay its outstanding debt burden, which at last count stood at 181 percent of Greece’s gross domestic product. The IMF goes on to hint that Greece may have to leave the eurozone. Throughout this familiar point and counterpoint, few focus on Greece’s need for the fundamental economic reforms that offer the country its only hope of using its own resources to meet its obligations.

Pretty much the same actors are playing the same roles as a couple of years ago, when Europe last staged this farce. Greek prime minister Alexis Tsipras has assumed his same initial tough stance toward Greece’s creditors, just as he did last time, before he caved into EU demands. German finance minister Wolfgang Schäuble insists that the EU will give no help until Greece broadens its income tax and cuts public pensions enough to create a budget surplus excluding debt service costs—known as a primary surplus—that is equal to 3.5 percent of GDP and maintain that surplus for ten years. Greece has countered by saying that it might commit to three years. The head of the IMF’s Europe department, Poul Thomsen, has argued that such goals are impossible. He has pointed out that next year Greece expects a primary budget surplus of only 1.5 percent—even after two years of severe budget constraints. He has also gone on to stress that such fiscal severity is counterproductive given Greece’s depressed economy and fragile politics.

The IMF has a point. Past budget stringency has failed to relieve Greece’s predicament. To be sure, Greece has never really lived up to its commitments in this regard, but even previous watered-down tax hikes and spending cuts have so depressed growth that progress on public finances has remained problematic. Since this crisis first emerged in 2010 and Greece first began to comply with EU budget demands, the real economy has shrunk 4.2 percent a year through 2015 (the last full year for which data is available). Unemployment has climbed to 26.2 percent of the workforce, and youth unemployment stands at 49.8 percent. Such economic reverses have increased needs for government relief, even as they have reduced government revenue flows from income and value-added taxes. As a result, public finances have suffered. German demands for more severe action along these lines seem unlikely to have a different, more favorable effect going forward.

Meanwhile, everyone seems to ignore the fundamental economic reforms that might get Greece out of its untenable situation. If Greece were to liberalize its constraining labor and product laws and ease restrictions on new business formation, then its economy could grow—even in the face of stringent budget regimes. Unfortunately, since the 2010 opening night of this farce, Greek governments left and right have resisted such steps. Instead, Greece’s established business interests have managed to keep down competition with a regime of government red tape, which is extreme even by European standards. Instead, Greece maintains a set of product regulations that stymies the free flow of goods in favor of existing buyers and suppliers. Instead, unions and others in established positions have secured themselves behind labor laws that constrain the ability of businesses to either hire or fire—at the expense of job seekers.

If Athens were to unwind this crony-capitalist regulatory regime, it would generate an economic dynamism that Greece desperately needs. Organic economic momentum would overcome the constraining effects of German budget demands. The country could break the vicious cycle it is in, where budget stringency fails to improve public finances because it also impedes growth and leads to more calls for greater restraint. That cycle only redoubles the weight on the country’s economy and future budgets. By promising organic growth, fundamental reforms might even give private investors enough confidence to lend Athens money at supportable rates and obviate its need to go to Europe, hat in hand.

But such reform is unlikely to take place any time soon. Since Athens has overseen an economic disaster without tackling the entrenched interests that benefit from the status quo, then it is a good bet that the current regulatory mess will prevail. That leaves only two potential paths for Greece and Europe. In one, Greece fails, stiffs its creditors and leaves the eurozone to return to a depreciated drachma. Greece would have trouble borrowing at supportable rates for years following such an event, and though a depreciated drachma might help Greek exports and tourism, it would further impoverish an already suffering population by reducing the global buying power of its income. Such an event would also raise additional doubts about the European experiment as it is currently structured. But what is more likely is that Greece will pretend to comply with the EU’s demands, secure funding and avert a crisis until it becomes apparent that Athens cannot make the next big payment. At that time, the same players—or their understudies—will take the stage for the next remake of this show.

Milton Ezrati is contributing editor at the National Interest, an affiliate of the Center for the Study of Human Capital at the University at Buffalo (SUNY), and recently joined Vested as its chief economist. His most recent book, Thirty Tomorrows, describing how the world can cope with the challenges of globalization and aging demographics, was released recently by Thomas Dunne Books of Saint Martin’s Press.