Greece's Austerity Deal: Welcome to Power Politics in the Eurozone 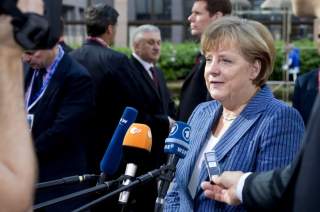 Even as new dramas erupted in Greece’s parliament over the last two weeks, the country’s debt crisis was headed for a conclusion dictated by the ineluctable logic of power politics. Opposition parties provided the votes necessary to approve a new bailout by Greece’s foreign creditors despite a rebellion against the measure by a faction of the government’s own Syriza party. Under the leadership of Prime Minister Alexis Tsipras, parliamentarians have passed hundreds of pages of laws—many of which they were unable to read—in order to legislate economic reforms required by foreign officials, all to secure a bailout whose logic of austerity baffles many prominent economists.

Yet despite opposition from within Greece, across Europe, and around the world, a better deal is unlikely for the simple reason that the course of the crisis is prescribed not by policy but by power. German leaders, together with a coalition of hardline creditors, are doggedly pursuing their own rational political interests to the likely detriment of European solidarity. What’s more, they have been and will continue to be successful in this pursuit because the German economy is the largest and most productive on the continent—in other words, because Germany is the most powerful European state.

This is not a story about imperialism or German designs for world domination, nor does it turn on inflammatory stereotypes of puritanical northern Europeans or lazy southern ones. Instead, what is happening is that the age-old logic of power politics is undermining the European project of transnational integration on equal terms: powerful states are imposing their will on weak ones, albeit through finance, not arms.

As this reading of the Greek debt crisis makes clear, Europe must be liberated from the conflicts of power politics if it is to share a common currency successfully. However, the very events that have highlighted the need for institutional reform have likely put it firmly out of reach.

Throughout the crisis, German officials have behaved in a way that exposes their own political interests and betrays the fundamental role power politics is playing in the fate of Europe. From the start of the euro crisis, they have professed a single-minded interest in the preservation of the euro area and the European Union. “If the euro fails, then Europe fails,” Chancellor Angela Merkel has declared. Her steely finance minister, Wolfgang Schäuble, has broadcast the same message. “It’s not just about Greece,” he said in July. “We need to make sure the basis of people’s trust in Europe is not completely destroyed. We are defending Europe.”

Yet for a country purportedly serving European interests, Germany settled on a counterproductive approach. In July, Berlin and its allies gave Greece a choice: either accept a severe regime of austerity and reform in exchange for a third bailout, or default on Greek bonds, likely prompting a collapse of Greek banks that would require the government to print its own currency and abandon the euro in order to keep its economy from imploding.

Neither option seemed designed with European interests in mind. If Athens rejected the creditors’ deal, it would have been printing drachmas in short order. Not only does that seem like an odd way to maintain European integrity, but the consequences of a “Grexit” would also have rippled across the rest of the euro area. Many economists feared that markets would then turn on other struggling southern European countries, raising their own borrowing costs and setting them on a path to follow Greece out of the common currency. In the best case, precipitating a Greek default risked endangering the European project.

If, on the other hand, Athens accepted the creditors’ deal—as it has—then the European project would still be seriously compromised. In this scenario, Greece is set to remain in the euro area, but on a basis that flouts its sovereignty and calls the future of European democracy into question. It is hard to overstate what Greece’s creditors, led by German negotiators, have achieved: they have forced the Greek government to contradict the Greek people. The Syriza party was elected specifically to ease the burden of austerity, and voters then reaffirmed its mandate by soundly rejecting the creditors’ bailout terms in the country’s July referendum. The government has now been compelled to accept these terms with few changes.

This invasion of sovereignty threatens to permanently embitter Greece to the European project and to alienate small states and political parties across the continent to boot. Given these consequences, European solidarity hardly seems to have been the driving interest of German politicians and policymakers.

Heads I Win, Tails You Lose:

Instead, Germany’s interest is in seeing its loans repaid. In a country where further aid to Greece is deeply unpopular, Angela Merkel and her finance minister need to be seen ensuring that German money is not wasted. To that end, they offered their Greek counterparts a game of “heads I win, tails you lose.” Either outcome might be bad for Europe, but both allowed German leaders to show constituents that they were careful to safeguard public money. Greece could accept German assistance on the strictest terms or not at all.

Through their government, the German public is already Greece’s biggest creditor and has little enthusiasm for extending new loans to their southern neighbor or for forgiving what has already been lent. An inveterate poll-watcher, Merkel has hesitated in the face of this resentment, despite her reported anxiety that she not go down in history as the person who let the euro fail. Schäuble, for his part, has staked his political reputation on toeing a hard line against perceived Greek profligacy.

These political forces explain why Germany has prevented the creditors from offering a third choice better suited to holding Europe together: a grand bargain that includes both a bailout and truly substantial debt relief for Greece. This more comprehensive solution would combine new loans with partial forgiveness of some outstanding debt in a bid to restore the Greek economy. The IMF has made such a bargain a condition of its participation in a third bailout, and French officials have signaled that a debt restructuring should be on the table. Germany has played the spoiler. Ruling forgiveness out completely, German officials have only allowed that—if Greece takes its medicine in the form of a third bailout and continued austerity—a conversation could afterwards be had about limited debt relief in the form of longer maturities and lower interest rates on Greek bonds.

To be sure, everyday Germans are not being unreasonable when they express frustration over the euro crisis. Until 2009, the government in Athens was cooking its books. Germany’s famous Mittelstand of small- and medium-sized businesses weathered the global financial crisis remarkably well, due in large part to commendably responsible borrowing. Other small countries, like Slovakia and Slovenia, were not so fortunate but have grimly undergone their own austerity programs with less fuss. It is not only the German in the street who wants to know how rich and poor European states will protect against moral hazard in the future.

But whatever the merits of these institutional concerns, they trail behind shared political interests in explaining the trajectory of European integration after World War II. To shunt those imperatives aside in favor of making an example of Greece is terribly shortsighted from the perspective of future European integration.

German Strength and the Greek Gambit:

What makes Germany’s actions remarkable is not that its pan-European rhetoric cloaks self-serving motives. Instead, it is the fact that Berlin has actually managed to succeed in imposing its views on both Greece and partner creditors who are largely averse to its hardline stance.

The European project was intended in part to integrate Germany into the rest of the continent. During the two world wars, Europe was devastated by Germany’s military might. Diplomats realized that left unchecked, this power would trap the continent in a strong security dilemma and risk future conflict. As a result, policymakers sought to bind Berlin into a community of common economic interest.

This project has been successful insofar as Germany (and its neighbors) have exchanged commerce for war. However, Germany’s economic might and high productivity have once again put it in a position of power over its less successful neighbors.

The current crisis exemplifies Germany’s resurgence. In plowing forward with its austerity-based policy prescriptions, Berlin has confronted a chorus of critics and overcome them decisively.

Perhaps no event underscores German power as well as the Greek referendum. On June 27, Prime Minister Tsipras unexpectedly announced that the creditors’ bailout plan would be put to a national vote. The referendum was a puzzle to many—some credit it with isolating Greece—but the vote is best understood as an effort to create space between Germany and the more moderate creditors in an effort to extract better terms.

In part, the Greek gambit succeeded: Greeks voted resoundingly against the bailout package, highlighting substantial and public disagreement between Germany and a small coalition of hardliners, on the one hand, and the bulk of world opinion on the other. France’s Minister of the Economy, Emmanuel Macron, vowed to crusade against a “Versailles Treaty for the eurozone,” adding that “[i]t’s not because one side thinks they’ve won a referendum that we can crush a people.” France was echoed by Italy, the United States, and even the IMF, all of whom have backed a more moderate approach.