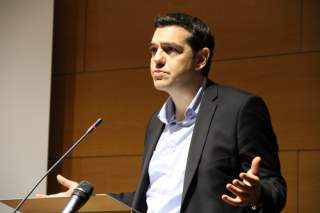 It was the French statesman, Georges Clemenceau (1841-1929), who is credited with stating, “It is far easier to make war than peace.” For Greek prime minister Alexis Tsipras, the statement is apt. The same could be said for Angela Merkel and a number of other European leaders who have found themselves embroiled in a crisis that refuses to go away. With Greece missing its $1.7 billion payment on June 30 and a July 5 referendum on whether Greeks should accept the last creditor proposal looming, the dreaded Grexit could also be on the horizon.

Prime Minister Tsipras’ Syriza-led coalition government has waged a war to find an alternative to chaining Greece to its massive mountain of debt, equal to more than 180 percent of GDP. The Greek public has undergone years of brutal austerity, stratospherically high unemployment (around 25 percent), and a substantial multiyear contraction in economic activity. Adding to the highly problematic nature of matters, Greece’s public-sector debt has not fallen, but has actually increased, making many question the value of austerity.

In negotiations with its creditors, Greece asked for debt forgiveness and less austerity, has given lukewarm support for structural reforms and promised higher taxes for the wealthy (an old standby of Greek governments). Tsipras’ approach has been antagonistic, rhetoric-filled and in some cases intentionally insulting. He has pandered to the ruling Syriza party’s anti-capitalist left wing to keep his government afloat in parliament and sought to extend a welcome mat to China and Russia in return for their financial support, and used that for leverage in negotiations with Brussels.

Tsipras and his slick finance minister, Yanis Varoufakis, have calculated that the European Union will eventually give in to Greek demands because the cost of letting the Mediterranean country default and leave the euro is too high. Simply stated, it would be cheaper to pay Greece to remain in the eurozone than to let it go. If Greece exits, do Portugal, Italy and other economically hard-pressed countries follow, which could weaken the zone’s currency and undermine banking and insurance systems in northern European countries?

To be fair to the Tsipras administration, the creditor team of the EU, European Central Bank (ECB) and IMF have played hardball with Greece, aggressively discouraging any idea of debt forgiveness, demanding further changes in the country’s pension system and renewed vigor on privatization. Greek insults have been met with European insults, injecting a personal drama to the negotiations.

The hardline on Greece largely comes from Germany, where Chancellor Angela Merkel is under pressure from the public and within her own government not to give in to Greek demands, even if that means Greece leaving the eurozone. Indeed, the chancellor’s ally Christian Social Union leader Hans Michelbach recently stated, "Either Greece declares itself willing for a viable solution or the country must leave the euro. The euro zone could cope with the consequences of a Greek exit."

There are also voices in Europe’s north that imply the Greeks need to be punished for their financial recklessness. An increasingly vocal number of Europeans believe that Greece’s departure would actually strengthen the euro, as it would remove its weakest link.

One should be careful for what one wishes. Global markets sold off on June 29 following the breakdown of bailout negotiations, Greece’s imposition of capital controls, the declaration of a bank holiday in Greece and the suspension of ECB support for Greek banks. Connectivity in financial markets should not be overlooked, especially at a time when China’s stock markets have headed into bear territory and Puerto Rico’s government admits that it cannot pay its $72 billion debt.

It is time for truth and consequences for Greece and Europe. The EU policy of dealing with Greece has failed to resolve the country’s problems, possibly even making them worse. At the same time, Greece needs to make its economy more competitive (including better taxation), while there will be no long-term economic advance without a debt haircut (a cut in the value).

The haircut idea on debt is hardly new. Much of Latin America parked itself into a debt-laden cul-de-sac in the 1980s; the path out came with restructuring its external debt (including haircuts) and economic reforms. This is something for Athens, Berlin and Brussels to think about—if they can get beyond the emotion.

The other truth facing Greece is that the referendum could postpone any settlement. Although it puts the country’s fate in the hands of the Greek people, it runs the risk of leading to more politics. Opinion polls currently indicate that the “yes” side could win, but a week of economic chaos and little access to bank accounts in the lead-up to the vote, could sour the public on the costs of being part of Europe’s grand experiment.

A “no” vote victory would reinforce Tsipras’ claim that a hard line with the EU is the correct path, and that Europe will eventually cave. This could of course backfire, with the EU willing to take the risk of a Grexit. Greece could enter another round of depression-like economics. Conversely, if Greece is successful in forcing its creditors to give ground on debt forgiveness, Tsipras and Varoufakis would appear to be brilliant in their execution of Greek debt policy.

A “yes” victory would also bring is its own set of problems. While it might make finding an agreement with the creditors easier, a loss for the Syriza government could result in a no confidence vote, which could see the government ousted. Who then replaces the outgoing administration? Would a unity government be formed from a fragmented opposition, or would the Greek president opt for a temporary technocratic government with a mandate to conclude a deal, eventually leading to new elections?

A Grexit will not offer a quick and easy answer for Greece. As the Economist observed (June 20, 2015): “The upshot is that Grexit is a process, not an event. Even if talks fail, even if Greece defaults, even if it introduces capital controls and the government starts to issue paper IOUs because no more euros are left—even then, a referendum or a new government could still offer Greece a way back.”

Returning to Clemenceau, the French statesman, it is indeed easier to make war than peace. It should be remembered that he was a major force behind the Treaty of Versailles that concluded the First World War. The treaty was to go down in history as a humiliation for the Germans, fueling a strong desire for revenge and eventually leading to the Second World War. Clemenceau was very much right about the difficulty in making peace. In this, he ultimately failed. The risk with Greece is that a humiliating deal will not stick. All roads lead to reaching a lasting agreement on debt reduction and a Greek willingness to restructure the economy. Without these, all talk remains meaningless, even in a postdefault environment.