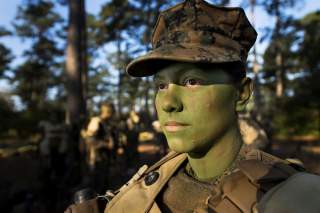 Unless the heads of the Armed Services ask for an exception to policy by October 1, their tactical combat units will be opened to women on January 1, 2016. Civilian overseers in the Department of Defense have already signaled that this is what they want. So, standing up to them would appear futile. However, G.I. Janes do not belong with G.I. Joes—and fighting is what men with four stars on their shoulders (aka the Service chiefs) are supposed to do.

It may seem silly to ask why we even have ground combat units. But it is not clear that everyone in Washington understands. The short answer is: Unlike units that handle logistics, communications, intelligence and other functions, a ground combat unit’s sole purpose is to take the fight to the enemy and to kill or destroy more of them than they can kill of us.

To succeed, ground combat units need to stay lethal, hard-charging, aggressive and cohesive. It is worth noting that:

– No one yet has invented anything that surpasses the lethality of all-male units.

– Introduce women, and you disrupt the dynamic in squads, platoons and teams.

To cut to the chase: Congress might decide, and the public might even demand, that every other institution and organization in the country be gerrymandered to be gender neutral or more diverse. But if it proceeds to allow DoD to emasculate ground combat units, all of us end up imperiled.

First, there is no other country that will affect a rescue of the United States. We are not England circa World War I or World War II. No one has our back. We carry NATO. When it comes to protecting us, our military is it.

Second, the past twenty-five years of intervening abroad guarantees us enemies in perpetuity. If I were a young Somali, Afghan or Iraqi who had lost a family member, property or peace of mind to a night raid, if my life and my city had been turned upside down—as it has been for legions of non-Americans—I would now spend the rest of my days seeking revenge.

But likewise, if I were living in China or Iran, or any other aspiring once-and-future power, I would want my government to out-compete the United States by whatever underhanded and unconventional means it could devise.

Competition constitutes the third reason Washington had better concentrate on making combat units more rather than less effective. The United States would have to suffer a catastrophic economic collapse before we Americans ceased to want to compete abroad. But by its very nature, competition generates rivalry, which can lead to war—unless the costs are deemed too high.

It takes an unequivocally strong military to signal to others why they shouldn’t take up arms or engage in dirty dealing. Though even then, signaling doesn’t always work—remember the First Gulf War?

When it comes to war, combat may seem to be governed by all sorts of rules, and militaries like ours may well strive to abide by “Just War” principles. But at the unit level, on the ground, among combatants—when the overall aim is to either win or to survive—niceties go out the window.

So, consider what we already ask soldiers to try not to do, and then reflect. We saddle combat units with the heaviest burden any country can ask its citizens to bear: To wage lawful war so that the rest of us don’t have to. Given this reality, we should ask: do we really now want to further complicate combat soldiers’ and Marines’ lives? Is that what they deserve from us?

In the not-so-distant past, DoD’s civilian leaders, along with the heads of the Services, were committed to simplifying life for combat soldiers and Marines so that when they were sent into combat zones, there were no extraneous distractions. Even today, DoD spends tens of millions of dollars on family support efforts so that soldiers and Marines don’t have to worry about the health and well-being of their families when they are deployed.

Consequently, though it defies common sense to inject the ultimate distraction—women—into otherwise all-male tactical units, Secretary of Defense Leon Panetta’s decision to do so was a political masterstroke. By putting the onus on the Service chiefs to have to try to defend the status quo if they ask for an exception, Panetta sandbagged them. Any male in uniform who argues that ground combat units should remain exclusively male sounds like a chauvinist or a dinosaur.

Yet, there is no good military reason why women should be integrated into otherwise all-male combat units.

Indeed, it is proponents—and not men in uniform—who should be put on the defensive. Before it is too late, Congress should step in and force proponents to have to answer at least five sets of questions:

1) How will integrating women into otherwise all-male groups render these units more effective at closing with and destroying the enemy? Or—do proponents think combat units serve some other purpose?

2) If proponents want women to be able to participate in prolonged fighting instead of just an occasional, inadvertent firefight, then why not advocate for all-female units? Why do women need to live in foxholes or patrol behind enemy lines with men?

3) If proponents want women to be integrated into tactical units because this will help with their career advancement, then what about men who don’t serve in ground combat units? If equity really matters, why not challenge the promotion system overall, since everyone who serves in a nontactical unit—male and female—is (presumably) equally disadvantaged?

4) Alternatively, if the real driver is equity in service rather than just career advancement, why not lobby for universal service and a draft, so that every young American is able to fulfill his or her duty to the nation?

5) Or, for those convinced that women represent value-added because they process information differently than men, ask commanders whether they really need and want eighteen-year-old riflemen to think significantly differently from one another?

Then, ask the sergeants who form the backbone of combat units what would impel them to want to follow a colonel or general who hasn’t climbed the exact same rungs they have. Where is it written that a woman has to have been a “grunt” to be an effective strategic thinker? Men should be asked: Does a woman really have to have “been there, done that” to devise sound strategy?

Tellingly, none of these kinds of questions have been posed. Yet, there is every reason to believe women could effectively oversee operations at the strategic level without having first led infantry squads, platoons or Special Operations teams. As it is, many of today’s most highly praised generals never served in combat.

Of course, it could also be that proponents are correct, and men and women behave and think differently. Spend time with the Navy at sea and it is clear that women have had a civilizing effect on ships, just as they do on staffs and in headquarters elsewhere. But visit a combat zone, spend time with infantry or Special Operators, and it is equally clear combat will never be civilized—or at least not until we return to jousting and the days of high chivalry, which proponents surely don’t want.

Another difference is unit size. When good order and discipline is disrupted by boy-girl issues, morale may suffer, but ships and staffs don’t lose their focus. In contrast, six-, ten-, or twelve-man tactical units spin apart—or have to be taken apart by their commanders who, in a combat environment, have plenty else to contend with.

Also, proponents might want to try to have it both ways by lauding women for having “female brains” and then acting as though women and men are easily interchangeable. But under this formulation, every time a mixed unit suffers a male casualty, the replacement can only ever be another male. Ditto for females—something that would create a logistical nightmare for the Army and Marine Corps.

Ask any Special Operator, infantry soldier or Marine and he will readily acknowledge that women are a boon for certain kinds of special intelligence-gathering or reconnaissance missions. Then ask the sergeants who are responsible for the internal workings of ground combat units what will happen to cohesion should women be assigned to these units. Sergeants can tell you what will happen because they already know the degree to which men’s behavior changes whenever women are around.

If only emotion could be drained from this debate, most adults would likely concede that in normal workplaces, liaisons, flirting, favoritism and drama occur. Yet, no group of individuals anywhere spends more intense amounts of time stuck together in small numbers than do members of infantry squads, Special Forces teams or SEAL platoons. Wildfire firefighting may come closest in terms of presenting a similarly unstable, 24/7 environment. But every job people think is comparable to combat involves shift work; employees get a break from work and also get a break from one another when their shift ends. Not so in combat units.