Groupthink, Not the Deep State, Is the Real Culprit 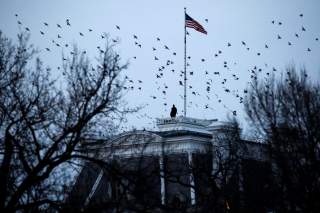 IN POLITICAL science, the “deep state” concept has been used to describe politics in countries like Turkey and Pakistan. In these places, deep-state theorists claim shadowy networks engage in extralegal and illegal activities, including bombings and assassinations, to advance their parochial interests or protect their vision of the regime. Given this context, the term “deep state” surely doesn’t fit an established liberal democracy like the United States.

And yet “deep state” language has been adopted by legitimate commentators in America, trying to analyze our politics today. While usages vary, the basic idea behind these deep-state arguments is that well-placed elements inside the permanent national-security bureaucracy, and those tightly connected to them in industry and think tanks, have been able to dominate—or even control—U.S. foreign policy. They allegedly do so through various mechanisms, including inside and outside pressure; control of vast resources and capabilities; leveraging information asymmetries to their advantage; engaging in threat inflation and selective leaking; and replicating, reinforcing and policing the ideas and culture within key institutions to produce a “groupthink” mentality.

Some consider secrecy an essential component of the deep state. For example, ABC News, in a 2017 poll about the existence and power of the deep state, defined it as “military, intelligence and government officials who try to secretly manipulate government policy.” But the most cogent theories posit that the deep state is operating in the open and without any central direction.

The end result of all these machinations? According to deep-state theorists, the preferences of elected officials and political appointees are subverted, undermining the will of the people and our republican form of government. To prove their case, theorists point to the continuity of our foreign policy despite new leaders taking office with an alleged commitment to change.

The idea of a deep state running the show in foreign policy is not solely a Trump-era phenomenon. Mike Lofgren, a career congressional staffer, argued in 2014 that there was “a hybrid entity of public and private institutions ruling the country according to consistent patterns in season and out, connected to, but only intermittently controlled by, the visible state whose leaders we choose.” Tufts University professor Michael Glennon introduced his “double government” concept during the Obama presidency.

Glennon claims that Obama’s policies resembled those of the Bush administration (despite Obama’s alleged preferences to the contrary) because there was a second government calling the shots:

“A de facto directorate of several hundred managers sitting atop dozens of military, diplomatic, intelligence, and law enforcement agencies, from the Department of Homeland Security to the National Reconnaissance Office, has come to dominate national security policy, displacing the authority not only of Congress but of the courts and the presidency as well.”

But is this all true? Is there a “deep state” (or a less sinister-sounding “double government”) dominating national-security policy—the wishes of presidents, other officials and the people be damned?

In short, no. The notion that elected officials are trapped, rendered impotent, their preferences subverted by bureaucrats and their allies, is simply inaccurate. This isn’t to say that permanent networks within the government don’t matter. But as critics of the old bureaucratic-politics paradigm (such as Stephen Krasner and Robert Art) argued, presidents and shared mind-sets are strong determinants of foreign-policy decisions, even if faced by a willful bureaucracy with its own agenda. When presidents have strong preferences about an issue, they win by devoting attention and expending political capital in the service of their goal.

President Obama prevailed on big issues that he focused on and that important players in the alleged deep state opposed, including drawing down in Iraq, avoiding deep involvement in Syria and negotiating the JCPOA. In the case of Libya, it was not the deep state but rather key members of Obama’s own national-security team (Clinton, Rice and Power) who pushed the president to intervene. As Krasner reminds us, “The President chooses most of the important players and sets the rules” for decisionmaking. This includes, importantly, selecting the individuals who are able to “whisper” in the president’s ear. On Libya, Obama got the wrong whispers—but they came from the people he chose, rather than a nefarious deep state. And he could have listened to other voices. Had Obama really wanted to shift from a primacist grand strategy to one of realism and restraint, he would not have surrounded himself with so many top officials representing the status quo. Likewise, if President Trump strongly preferred change, he could have selected advisors less committed to the same general vision as his predecessors. Thus it is no surprise that there has been so much policy continuity (to take just two examples, see Afghanistan and the new National Security Strategy) despite Trump’s campaign rhetoric.

While there is no deep state as it has been defined, there is a broad foreign-policy establishment—encompassing elected leaders, appointed officials, top bureaucrats and others who work in the foreign-policy space—with a shared mind-set about the nature of the international system and America’s role in the world. This establishment is broader than a deep state and far less nefarious (even if misguided).

For the last twenty-five years, our foreign policy has been on autopilot due to a dominant establishment mind-set that has gone largely unchallenged in a unipolar world with few hard constraints. But this also means that there is an opportunity for rival discourses to challenge the status quo, especially those that best fit with our vital interests and the few constraints that do exist. This is why bureaucratic-politics critic Edward Rhodes is right to conclude that “perhaps ‘the name of the game’ is not politics, but the competition of ideas for intellectual hegemony.”

William Ruger is vice president for research and policy at the Charles Koch Institute.

Image: Birds fly over a pair of rooftop Secret Service counter-snipers as they watch over U.S. President Donald Trump as he participates in the National Christmas Tree lighting ceremony near the White House in Washington, U.S. November 30, 2017. REUTERS/Jonathan Ernst