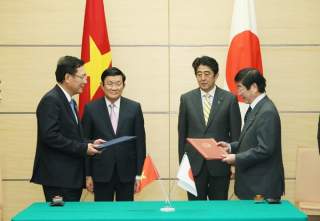 The Ghost of the Vietnam War

In terms of trilateral cooperation, one could say that Japan has been an integral strategic part of Vietnam’s economic development—particularly for its infrastructure development—compensating for the United States’ inability to play a larger role, due to strained relations between Washington and Hanoi. Several war-related issues—such as American soldiers MIA, Agent Orange, unexploded ordnance and land mines, and Vietnamese refugees who have settled in the United States demonstrating their hostility toward the rapprochement between Vietnam and America—have contributed to this tension.

Now that Washington and Hanoi have settled many wartime difficulties, overall ties between the three nations are likely to improve. It is time to reflect on how these countries can build their mutual relations, complementing each other’s interests in various strategic domains.

A Bright Future for U.S.-Vietnamese Relations

In the future, Vietnam may find the American market more attractive than the Japanese one, simply because it is larger than Japan’s. The United States has a great advantage in that English, which is quickly becoming popular in Vietnam, can facilitate communications with the Vietnamese. It also has a large group of Vietnamese Americans, who number 1.55 million people, according to the 2010 census. The group, which is the fourth-largest Asian ethnic group in the United States, has what one might consider “bridge-building ambassadors” who can serve as bridge builders between American and Vietnamese societies and who can exert influence on U.S. policies toward Vietnam.

Conversely, Japan has a relative advantage over the United States in terms of geographic proximity. Japan can continue to promote trade, investment, and ODA for Vietnam without worrying about the legacy of the Vietnam War. While Japan and the United States occasionally voice their concerns on issues like inefficient bureaucracy, corruption, and violation of intellectual property rights, Japan should encourage the United States to treat issues sensitive to Vietnam, like human rights, political and religious freedom, and workers’ rights, in a more cautious manner.

U.S.-Japanese-Vietnamese trilateral cooperation is indeed an important part of all three nations’ strategic agendas. Economic cooperation should be based on political and strategic cooperation. Today, all three nations share similar perceptions of China’s growing naval and non-naval maritime power in the South China Sea. There is no competition between Japan and the United States in seeking access to the Vietnamese market. The TPP is an essential means for all three nations to come together even more closely, although it is a step toward an eventual Asia-Pacific–wide economic integration by merging the TPP with an Asia-based Regional Comprehensive Economic Partnership (RCEP).

1. Japan, the United States, and Vietnam should consider forming an intergovernmental committee at the ministerial level to discuss ways of strengthening economic interdependency in the areas of trade and investment.

2. Tokyo and Washington should help fortify Hanoi’s economic base through trade, investment, and ODA so that it can resist China’s efforts to weaken its economy through coercive means now and in the future.

3. Japan and the United States should settle their TPP negotiations at the earliest opportunity so that they can exert a positive impact on the remaining negotiations. Recognizing that joining any FTA is at the expense of substantial adjustment costs, Tokyo and Washington should also offer economic and technical support for Vietnam’s transition process.

6. Both Japan and the United States should call on Vietnam to modernize its bureaucracy and speed up paperwork regarding trade, investment, and ODA.

7. Tokyo and Washington should coordinate their approaches to supporting Mekong Delta development, as well as Hanoi’s civilian nuclear program with respect to training nuclear specialists.

Masashi Nishihara is the president of the Research Institute for Peace and Security based in Tokyo, Japan. This article is part of the report, “Tackling Asia’s Greatest Challenges,” which can be read in its entirety, here. The Center for a National Interest would like to thank the Center for Global Progress for its important support of this initiative, and would also like to thank the Research Institute for Peace and Security and the Diplomatic Academy of Vietnam for participating in the project.