The Growing Russia-China Threat to America 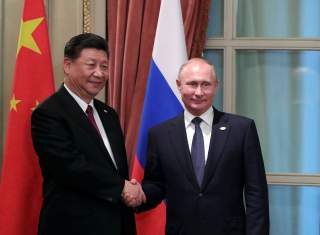 Appearing before the Senate Intelligence Committee yesterday, Daniel Coats, the Director of National Intelligence, stated that China and Russia “are more aligned than at any point since the mid-1950s.” His warning confirms the importance of the cover story by Graham Allison and Dimitri K. Simes in the January-February issue of the National Interest titled “New Best Friends?” that contains essays by each author carefully examining the growing ties between Beijing and Moscow.

Their new piece in the Wall Street Journal today titled “A Sino-Russian Entente Against Threatens America” is based on those essays. Allison, the Douglas Dillon Professor of Government at Harvard University, and Simes, President and CEO of the Center for the National Interest, explain that American foreign policy is inadvertently prompting the two great powers to collaborate more closely. According to Allison and Simes, “this grand alignment of the aggrieved has been moving from the realm of the hypothetical toward what could soon be a geostrategic fact. Beijing and Moscow are drawing closer together to meet what each sees as the `American threat.’” In conclusion, Allison and Simes state, “a sound U.S. global strategy would combine greater realism in recognizing the threat of a Beijing-Moscow alliance, and greater imagination in creating a coalition of nations to meet it.” Their full essay in the Wall Street Journal can be read here.