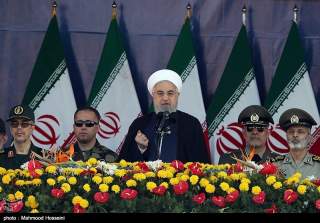 The ingredients for a war with Iran are falling into place. The Trump administration’s termination of oil waivers for importers of Iranian oil and designation of the Islamic Revolutionary Guard Corps (IRGC), a branch of Iran’s state-run military, as a foreign terrorist organization (FTO) are dangerous acts of escalation. Surprisingly, the Iranian reaction to the IRGC designation has been restrained as Tehran’s top decisionmakers remain committed to waiting out the Trump administration and not being baited into conflict. However, their approach is under immense domestic challenge—and could soon become unsustainable.

Iranian president Hassan Rouhani and his reformist and moderate allies continue to prefer to minimize foreign tensions through diplomatic engagement. Despite President Donald Trump’s abrogation of the Joint Comprehensive Plan of Action (JCPOA) nuclear deal and the reimposition of hard-hitting unilateral sanctions, Rouhani has won elite consensus on refraining from retaliatory actions that could spur a multilateral front against Iran or risk conflict.

Rouhani has pushed for a policy that is best described as strategic patience. It has been marked by continuing to adhere to the JCPOA, reticence to escalate regional tensions, and preserving ties with Europe in the face of the Trump administration’s “maximum pressure” campaign. While Rouhani and other senior officials have ruled out talks with the Trump administration, they have left the door open to engaging a future White House that renters the JCPOA.

“[The U.S.] has burned the bridge,” Rouhani declared last August, “Now, the U.S. is standing on the other side … If it is honest, it should fix that bridge again.” In February, Rouhani reiterated that Iran would be willing to engage the United States “if America reverses its course.”

However, the Trump administration’s blunt economic pressure, regime-change rhetoric, and actions, such as the IRGC designation and termination of oil waivers, are closing the window for internal moderation and removing brick-by-brick the bridge that Iranian pragmatists are standing on. Instead, Iranian hardliners, who seek permanent U.S.-Iran estrangement not unlike their U.S. counterparts, are consolidating power.

As the influence of Iranian hardliners increases, so does the likelihood that Iran will tap into its underused leverage to raise the costs for U.S. actions against it. Among the actions publicly discussed within Iran are targeting U.S. interests in the region, breaching some elements of the nuclear agreement (whether through expanding uranium enrichment and/or ceasing implementation of the additional protocol to its IAEA safeguards agreement), or disrupting trade out of the Persian Gulf and Red Sea.

The U.S. designation of the IRGC as a terrorist organization, which top Pentagon and CIA officials opposed, covers upwards of eleven million Iranians and plays into Iranian hardliner narratives of irreconcilable U.S. hostility towards Iran. It will in fact be a major impediment for diplomatic contact given that U.S. officials would have to directly or indirectly negotiate with a terrorist organization. Brian Hook, the Iran policy coordinator at the State Department, has argued that the designation will not impede diplomatic efforts and even cited negotiations with the Taliban to underscore this point. However, the United States notably never designated the Afghan Taliban as an FTO precisely because, according to Voice of America, it “would restrict U.S. and Afghan government diplomatic contacts with the Taliban, making peace talks more difficult.”

However, in the wake of the IRGC designation, Iranian officials have refrained from escalation, for the time being. The decision has mostly been framed in Tehran as reflecting the failure of Trump’s approach to alter Iranian policies or foster regime change. The highest military body in Iran, the General Staff of the Armed Forces, said in a statement that the designation had “no practical value and was condemned to fail.” Ali Akbar Velayati, a senior foreign policy advisor to Supreme Leader Ayatollah Khamenei, similarly dismissed the designation as reflecting America’s “weakness, incapability, and resort to every desperate act.”

Parliamentary Speaker Ali Larijani said the IRGC designation came after President Trump was “unsuccessful” in “hurting” Iran after withdrawing from the JCPOA and reducing “Iranian oil sales to zero.” He also importantly reiterated Iran’s commitment to the JCPOA, stating: “There is no reason for Iran not to continue to adhere to an agreement that all the world accepts except for one country [the U.S.].”

President Rouhani, for his part, strongly defended the IRGC and underscored that Iranian restraint should not be interpreted as a sign of weakness. He stated that Iranians are now “more united than ever” and proclaimed: “I tell the group of five [the remaining parties to the nuclear deal] that we are patient but our patience has an end and its possible that in this patience, Iran takes a different step.”

Rouhani went on: “If we are patient, it’s not because we are scared. It’s because we are prudent. We are afraid of no one, our path is the correct path and we hope that the others [the Trump administration] know that the future will judge them.”

Significantly, Iran’s response of designating U.S. Central Command (CENTCOM), the arm of the U.S. military that oversees operations in the Middle East and Africa, was presented as a necessary “tit-for-tat” measure. Heshmatollah Falahatpisheh, the influential chairman of the Iranian parliament’s National Security and Foreign Policy Commission, has said in this regard that Iran’s response was a “defensive measure” and not a “declaration of war.” The Iranian parliament also conditioned its bill designating CENTCOM on the outcome of the Congressional review period of Trump’s IRGC designation, which ended on April 15.

However, the IRGC designation has served to further embolden Tehran’s hardline voices. In response, Hossein Shariatmadari, the editor of the conservative Kayhan newspaper, laid out a legal case for why Iran should close the Strait of Hormuz and lambasted Rouhani for not “heeding the lessons of the JCPOA” and previously calling for “the Revolutionary Guards and army to return to their bases.”

Shariatmadari also criticized Rouhani’s efforts to pass anti-money laundering and terrorism financing bills in accordance to guidelines set out by a global financial body. The bills have been subject to a highly contentious domestic debate and have spurred impeachment efforts against Rouhani and Foreign Minister Javad Zarif by hardline parliamentarians. Shariatmadari took the opportunity presented by the IRGC’s designation to say that Rouhani's efforts to “impose” the bills sent a signal of “weakness” and “emboldened” the United States to designate the IRGC as a terrorist organization.

If President Trump continues his current policy on Iran and further ratchets up tensions, the bottom will eventually fall out for Iranian moderates and the logical conclusion of the ensuing escalation cycle would be conflict. While this is likely the goal of National Security Advisor John Bolton and other administration hawks—who have long made their preference for bombing Iran clear—Trump himself campaigned against America’s “endless wars” in the Middle East and lamented the trillions of dollars the United States has spent in the region. Yet, not dissimilar from moderates in Iran seeking to prevent conflict, the bottom may soon fall out from Trump’s anti-interventionist promises—and the pro-war predilections of his closest advisors may soon overwhelm any hope for avoiding a disastrous war.

Sina Toossi is a research associate at the National Iranian American Council (NIAC). He tweets @SinaToossi.

Assal Rad is a policy analyst at the council and received her Ph.D. in History at the University of California, Irvine.