Guilt Trip: What America Should Learn From Germany’s Nazi Reckoning 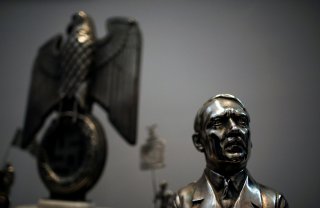 FEELING GUILTY? From Dante to Freud, guilt is a ripe subject for exploration. More often than not, the sentiment is understood in personal terms, as the responsibility assumed by an individual for a wrongdoing. It is Raskolnikov, not Mother Russia, who splits open the heads of the sisters with an axe at the outset of Fyodor Dostoevsky’s mid-nineteenth-century novel, Crime and Punishment, and it is his lone task, no one else’s, to atone for his crime.

In the twentieth and now the twenty-first century, though, guilt has enjoyed a different connotation. It’s become attached to the deeds of nations and even of civilizations. The French writer Pascal Bruckner, for example, took up this theme in The Tyranny of Guilt: An Essay on Western Masochism, published in French (La tyrannie de la pénitence) in 2006 and in translated English in 2010. His subtitle notwithstanding, Bruckner insisted on a crucial distinction between America and Europe. “America is a project, Europe is a sorrow,” he said: “one broods on the past, the other starts over again.”

No longer. Today, America is experiencing what is popularly called a reckoning—a return to the past with an eye on crimes related to race, the crime of slavery especially, charged not only to particular individuals or institutions but to the nation as a whole. It is a backwards voyage with an avowed forward purpose: to make America a better, more just society. Still, even if intentions are laudable, the question can be posed: What does it profit a nation to embark on what might aptly be called a guilt trip? Is the hoped-for destination likely to be the actual point of landing?

A PLACE to begin to look for an answer to that question is with one of those long, nearly impossible for the English speaker to pronounce, German words: Vergangenheitsaufarbeitung. This word, for which (of course) there is no ready English substitute, can be translated as “working-off-the-past,” Susan Neiman, director of the Einstein Forum in Potsdam, tells us in her 2019 book, Learning from The Germans: Race and the Memory of Evil. Neiman, a Jewish native of the American South who has lived in Tel Aviv and now lives in Berlin, offers a guide to this territory. In her book, she notes a marked generational dimension to Vergangenheitsaufarbeitung:

Working off Germany’s criminal past was not an academic exercise; it was too intimate for that. It meant confronting parents and teachers and calling their authority rotten. The 1960s in Germany were more turbulent than the ‘60s in Paris or Prague—not to mention Berkeley—because they were not focused on crimes committed by someone or other in far-off Vietnam, but those considerably closer to home, committed by the people from whom life’s earliest lessons were learned.

And the spirit of Vergangenheitsaufarbeitung, Neiman takes care to remind, was not a one-off of the 1960s, but continued to express itself for decades to come. In Berlin, in the autumn of 1982, she recalls:

…those who came of age in the ‘60s were … working-off-the-past with special intensity, for the fiftieth anniversary of Hitler’s election was approaching. There seemed no end of books and speeches … The arts academy offered workshops on making films about the Third Reich. There were performances of music the Nazis banned and performances of music they promoted, with lectures accompanying each. Neighborhoods competed with each other to explore their own dark history.

That last sentence bears repeating, followed by a question mark: “Neighborhoods competed with each other to explore their own dark history?” To come to grips with personal guilt, as seen in Raskolnikov’s paradigmatic experience, tends to be a wrenching, anguished, deeply private matter—in his case the occasion for a conversion from a sort of casual nihilism to hard-won religious belief. The spectacle of neighborhoods in left-tilted Berlin vying with each other to exhume crimes of the past hinted at a cultural or political fashion. To parade guilt, was this to be a public badge of authenticity in the new Germany?

Still, Germans were right to reject the tempting idea, all too tempting, that, somehow, only Hitler was responsible for the evilness of the Nazi period, a point made by the ironically-titled play, It Wasn’t Me, Hitler Did It, that opened in Berlin in 1977 and continued on for thirty-five years. Even Bruckner accepts this lesson: in The Tyranny of Guilt, he commends Germany for its “exemplary effort to reflect on itself.” In his framework, guilt becomes oppressive, an exercise in “masochism,” in sweeping self-indictments of Europe as essentially a criminal enterprise and no more than that. He may sound like he is exaggerating but there are many such examples. In the 1990s, the Swedish writer, Sven Lindqvist, pronounced that extermination was “at the heart of European thought,” with the Holocaust properly understood as a culmination of Europe’s imperial and colonial crimes in places like Africa. This refusal to acknowledge Europe’s accomplishment as the pioneer of the Enlightenment in the thicket of the obscurantism of the Middle Ages—the trailblazer for what became known as modern Western liberal values—was more than just warped history. In this original-sin rendering of an entire civilization, here was a past that could never be worked off. Picture this Europe as a character consigned to Dante’s eighth circle of hell, head plastered with excrement.

SO, WHAT is it to be for America, circa 2020: A narrowly-cast Vergangenheitsaufarbeitung, in the purposeful and bounded (if not always pristine) German manner—or something a good deal messier than that?

An answer is suggested by two defining differences between the German experience with Nazism and the American experience with slavery and racial injustice generally. First, on the dimension of time, the Germans have less past—a lot less past—to work off. The Nazis became a national force on their party capturing nearly twenty percent of the vote in parliamentary elections held in 1930. Just fifteen years later Hitler committed suicide in a Berlin bunker, his ambitions, his regime, the thousand-year-Reich, obliterated for all time. By contrast, slavery in America began with the arrival of a slave ship in the British colony of Virginia in 1619 and was not abolished until 1865, on the passage of the Thirteenth Amendment by the U.S. Congress and ratification by states of the American republic.

Second, the American reckoning of 2020 occurs a century-and-a-half after slavery was formally outlawed. The American South, home of the defeated Confederacy, did not experience, post-Appomattox, a Berlin Sixties type moment, a new generation rising up to confront the sins of the fathers. To the contrary: defiant Southerners established the Ku Klux Klan to terrify freed slaves and perpetuate white supremacy, and they built monuments to honor Confederate leaders as martyrs to the Lost Cause. And even with slavery made illegal, African Americans were kept from fully participating in American society well into the twentieth century by a variety of measures, from the institution of sharecropping to the practice of voter suppression.

For these two fundamental reasons—the sheer amount of past that America has to process, and the long-delayed nature of the reckoning—an American attempt at Vergangenheitsaufarbeitung is bound to be less tidy than the German original. And so it is indeed proving.

Consider The 1619 Project. This “major initiative” of The New York Times, an ongoing collection of essays and educational materials, is intended, as the magazine’s editor-in-chief, Jake Silverstein, said on inaugurating the project last year, “to reframe American history by considering what it would mean to regard 1619 as our nation’s birth year.” What it would mean requires no strenuous exertion of the mind: it means a reductive, racialized understanding of a dichromatic America, divided into black and white. It is, in short, bunk.

To see race as the one recurrent thread in our history is, well, to see race as the one recurrent thread in our history. That insistent view translates, inevitably, into a flawed understanding of our past, including some of our most important moments. “Conveniently left out of our founding mythology is the fact that one of the primary reasons the colonists decided to declare their independence from Britain was because they wanted to protect the institution of slavery,” Nikole Hannah-Jones wrote in the first package of Times essays for The 1619 Project. She won a Pulitzer Prize for her essay even though she had her facts wrong. “The idea that the Revolution occurred as a means of protecting slavery—I just don’t think there is much evidence for it, and in fact the contrary is more true to what happened,” the historian Gordon Wood, his career devoted to the study of the American Revolution, has countered. He offered that remark in an interview given to one of the few media outlets in America committed to a rigorous, dogged challenging of the 1619 narrative: a website operated by Trotskyists, a clan wedded to class, not race, as the motive force of history. “The Revolution,” Wood added, “unleashed antislavery sentiments that led to the first abolition movements in the history of the world.” In response to this correction of the record, the Times made a modest “update” to the Hannah-Jones piece.