Is H. R. McMaster's Worldview Compatible with the President's? 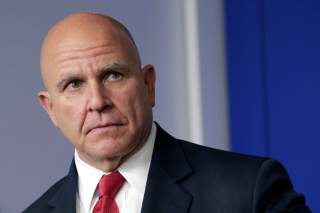 National Security Advisor Lt. Gen. H. R. McMaster made a rare public appearance at the September 25 Institute for the Study of War security conference, during which time he explained what he saw as his primary job. “We’re there to serve the president and help him to advance his agenda,” McMaster reportedly said. “There’s nobody there to control the president or ‘keep him on the reservation.’” Yet a careful analysis of McMaster’s past and Trump’s history suggests that McMaster might be subtly changing Trump’s agenda rather than merely serving it.

An examination of McMaster’s decades of performance, speeches and articles reveals that at his core, McMaster has a fundamentally different worldview from that of the president. The views that Trump expressed during his drive to victory in the 2016 election are different than what President Trump has expressed since McMaster’s arrival—views that are more in line with those for which McMaster has for many years advocated.

Typically, an incoming president will appoint to his National Security Council an advisor who has a broad and deep understanding of military, diplomatic and political affairs. The president also expects the advisor to have an equally deep understanding of the lens through which he views the world so that his advice is consistent with what the president wants to accomplish. Though McMaster has a wealth of knowledge of military affairs, evidence suggests his worldviews sharply diverges from Trump’s at critical points.

In April 2016, then-candidate Trump first outlined his official “America First” view of the world. Trump said he was breaking from what had been American policy for more than a decade by flatly stating, “We’re getting out of the nation-building business.”

One would expect that Trump’s national-security advisor would hold a similar worldview, yet based on recent events and an analysis of McMaster’s past public statements, it is clear that he holds divergent views from the president, especially when it comes to nation-building. It would be instructive to briefly trace McMaster’s trajectory through the military to better understand how his worldview was formed.

The Rising Star of H.R. McMaster

I served under H. R. McMaster from 1990–92, including combat in Desert Storm. At the time, McMaster was the commander of Eagle Troop, Second Squadron, Second Armored Cavalry Regiment (2/2 ACR) and I was his fire support officer. It was my job to coordinate artillery, mortar and rocket fire. McMaster rose to fame in the aftermath of that war because of his performance at the Battle of 73 Easting, which is where he won a Silver Star Medal for gallantry in action.

By any measure, McMaster is one of this generation’s most accomplished men in uniform. I have personally observed his unflinching bravery and expert leadership in combat. A stellar tactical resume, however, is not the sole or even a sufficient determinant of whether a person is the best fit to be National Security Council Advisor.

The American people elect a president based on the views and governing philosophy he or she communicates during the election. During the 2016 campaign, Hillary Clinton ran on a national-security platform that advocated for nation-building and an interventionist foreign policy. Trump ran on an “American First” foreign policy that called for a reduced footprint abroad, increased defense of the U.S. homeland, and requiring allies pay “their fair share” of mutual-defense treaties.

Despite his exemplary career accomplishments, an examination of McMaster’s publicly stated views––and his ongoing conflicts with the president and White House staff over foreign policy––would seem to have made him a better choice as National Security Advisor for a President Clinton had she won, than for Trump.

It is useful to compare candidate Trump’s views prior to McMaster being tapped as advisor to the statements Trump has made since hiring McMaster. A clear pattern emerges showing how the president’s views have shifted to become remarkably similar to those of McMaster, rather than the other way around. Three issues cast into sharp relief the change: Trump’s views on Iraq, Afghanistan and North Korea.

McMaster’s Views on Iraq and Afghanistan

McMaster has consistently advocated nation-building in the Middle East. In a 2007 speech at the Hoover Institute, McMaster said the United States must retain the ability to defend U.S. interests against both nation-states and terror groups. “The implication,” he explained, is “that the U.S. military must improve its ability” to conduct a wide range of missions, which he explicitly said includes “state-building in places like Afghanistan and Iraq.”

McMaster didn’t shy away from describing what conditions would have to be met to ensure success. “Ultimately, the Afghan government and security forces must be strong enough to control its territory, and contend with the regenerative capacity of the Taliban, and operate effectively against the nexus of insurgent groups, narcotics-trafficking organizations, and transnational criminal networks.”

While that would appear to be a fine goal, it is a physical impossibility for the United States to make it happen. Thus, regardless of how much time, resources and lives the United States sacrifices, that objective cannot be attained.

I spent considerable time on the ground in Afghanistan and observed firsthand that even with 140,000 U.S. and NATO troops, there were whole sections of the country in which terrorists were in complete control. Even with hundreds of billions of dollars worth of support, the government remains as corrupt today as it was in 2010. If our troops could not deny terror groups sanctuary and eliminate government corruption then, then that will clearly not happen with less than one tenth that number of troops now.

In 2014, at a speech before the Carnegie Council for Ethics in International Affairs, McMaster repeated a popular belief about why the 2007 surge in Iraq succeeded. It wasn’t just the military forces that caused the surge to succeed, he explained, “it was a political strategy that aimed to move Iraq’s communities towards political accommodation, a political accommodation that would remove support for extremists.” McMaster’s belief that the surge succeeded because U.S. leaders successfully “moved” Iraqi communities towards reconciliation is critical to understand––because it is almost completely wrong.

My own experience in Iraq and conversations I have had with numerous people who were involved in the 2007 surge reveals that the overriding reason the violence in Iraq was dramatically reduced was not U.S. tactics, but the brutality and stupidity of Al Qaeda in Iraq (AQI). Gian Gentile, a retired Army colonel and current senior historian at RAND Corporation, commanded a cavalry squadron in Baghdad in 2005 and later published the most authoritative book on the surge, Wrong Turn.

In it, the former West Point history professor painstakingly details how AQI had turned against what should have been their natural allies, Iraq’s Sunni Muslims, who had been the main drivers of the insurgency against the United States. AQI tried to force the Sunnis to adopt their international ideology instead of their nationalist focus, and were willing to kill those who resisted. That meant the Sunnis were being targeted by the United States, by Shia militias and by AQI.

At that point, the situation became an existential threat to the Sunnis and they concluded that it would be better to join with the United States to destroy their common AQI enemies than risk destruction. Once the tide began to turn, U.S. leaders correctly recognized the trend and supported even greater support of Sunni groups, producing the ultimate decline in violence.

It is crucial to understand, however, that without AQI brutality and the Sunni leaders independently deciding they needed to work with the United States, the surge would never have succeeded. Thus, when McMaster holds that the success came as a result of Iraqi citizens accomplishing political reconciliation––which clearly never happened––then he is likely to believe that future insurgencies can likewise be won with a similar approach.

That is in fact what McMaster believes about Afghanistan and Iraq. If America simply demonstrates enough political will and stays long enough, eventually political reconciliation will occur and the fight will end. He does not, however, shy away from explaining how long that might take: an open-ended commitment that will end in the distant future

In his 2014 speech at the Carnegie Council, he said ISIS could be defeated if only the United States communicated the proper amount of resolve. He cited the example of how U.S. troops had stayed forever in Korea following the end of that war. In 1953, he said, “It didn’t look good. . . . You had a country that was ravaged by decades of war, you had a country with no infrastructure, with an illiterate population, and a corrupt government. It didn’t look good. But with sustained development over time, development of civil society groups, development of political reform, U.S. commitment over time, you have success.”

In case there were any doubts about how deeply McMaster believes in open-ended military commitments, he reiterated the reference to 1953 Korea in a speech just last year at CSIS. “I didn’t even talk about Afghanistan, a war that’s ongoing; a war that, again, teaches us that the consolidation of gains is an integral part of war and armed conflict. And if we neglect that—if we think that that’s optional—we will not get to sustainable outcomes consistent with the vital interests that brought us into the conflict to begin with.”