The Hail Mary for Peace in Afghanistan 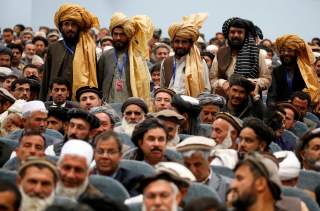 There are many difficult jobs in the U.S. government today, but Zalmay Khalilzad holds perhaps one of the most excruciatingly painful slots that are available. The former ambassador to Iraq, Afghanistan, and the United Nations has been tasked by the Trump administration to find a way out of the bloody conundrum that is Afghanistan, a country whose people have known nothing but war and turmoil for the last four decades.

Peace in Afghanistan still remains beyond the horizon’s edge. The United States and its allies recently discovered just how quickly a relatively promising negotiation can stall at a moment’s notice when the intra-Afghan dialogue scheduled for Doha this month was postponed due to disagreements over the Afghan government’s large delegation. If the main parties in the room can’t even agree on who will be sitting around the table, then how on earth can Washington organize—let alone sustain—a comprehensive peace process between combatants who openly despise each other?

Nobody, however, said crafting a conflict-ending peace in Afghanistan would be easy. Indeed, to expect that a peace process would succeed in ending a generation-long war in just a few months was about as likely as completely eliminating the Afghan opium trade. Ambassador Khalilzad remains insistent that talking rather than fighting is the only road out of an unending conflict, one that has impacted every Afghan family, resulted in 2,425 American troop fatalities, and drained the U.S. Treasury of nearly $1 trillion. There has never been a military solution to the war, and there never will be. The American people have long recognized this most elementary fact, as have the men and women who have served in the U.S. armed forces—60 percent of whom would support a full U.S. troop withdrawal from Afghanistan if the decision were made.

The question, of course, is whether the diplomatic process the United States has helped initiate will survive long enough to reach the finish line of an acceptable political compromise. At bottom, a peace settlement in Afghanistan will only be possible if the parties themselves can leave parochialism and stubbornness at the door and find a way to thread the needle between the Taliban’s desire for a return to a pre-2001 Islamic emirate and the Afghan government’s contention that all principles enshrined in the Afghan constitution must be respected. That is a very thin needlehole to thread indeed.

Yet despite the dark cloud of pessimism hovering over the Afghan peace talks, negotiation is the only way out. There is literally no other option. Seeking a total military victory is a fool’s errand, one that will only create more misery for an Afghan population that dreams of normality, and more frustration among the majority of Americans who are justifiably tired of watching their sons and daughters in uniform deploy—and sometimes die—into never-ending conflicts.

As of this writing, the peace talks are at a tenuous point. The Taliban remain defiant, unwilling to provide Afghan government representatives with the dignity of a face-to-face meeting. Afghan president Ashraf Ghani, while rhetorically supporting the need for peace, appears to be just as concerned with his own impending election campaign as he is in negotiating a diplomatic resolution to the war. The breakdown of consultations in Doha this month is a vivid reminder of how rapidly diplomatic progress can unravel and be overtaken by pettiness.

As a foreign country with significant political and economic influence in Afghanistan, the United States does not, and indeed should not, settle for this sort of childishness.

While Washington should avoid dictating to Kabul about what position is and is not acceptable for the Afghan government to take, it is perfectly reasonable for Khalilzad and his team to press Ghani on the issue of inclusivity. Having allocated $132 billion in reconstruction assistance to the Afghan government since 2002, including $83 billion in security aid, the United States is entitled to certain expectations. The Trump administration must make it abundantly clear to officials in Kabul that it will not tolerate the formation of an Afghan negotiating delegation that is less than representative of every strata of Afghan society, from women and ethnic minorities to the political opposition. Deliberately shutting out key constituencies or artificially watering down the Afghan delegation in favor of pro-government politicians only introduces further poison into an Afghan political system already characterized by bickering and infighting. The more consistencies left behind, the more power spoilers on the outside will have to undermine any peace arrangement that may occur.

The United States, of course, has far less leverage with the Taliban. The movement relies on different funding streams, possesses a vastly different opinion on what Afghanistan’s system of government should look like, and has after all maintained a robust insurgency for nearly twenty years.

Even so, Washington can use the Taliban’s goal of achieving a share of political power in Afghanistan to its advantage. During his next meeting, Khalilzad should send a stern warning to his Taliban counterparts that they will not accomplish their objectives by wishing the Afghan government away. If they hope to one day become an integral part of Afghanistan’s political future over the long-term, they need to eventually come to the conclusion that ducking and weaving from discussions with the administration in Kabul is an exercise in futility. Just like Kabul can’t wait out the Taliban, the Taliban can’t wait out Kabul—especially if the Afghan government continues to receive support from wealthy benefactors in the West.

Washington should also launch a parallel effort with its NATO partners with a focus on the day-after a peace settlement is reached. Just because the country is a long way from a peace agreement does not mean the United States and its allies in the NATO-led military coalition should not plan for this best-case contingency. Any foreign troop withdrawals that will be a part of an Afghan peace accord must be orderly, highly coordinated, and executed to a tee. There must be enough time and space for each member of the coalition to register their concerns, a give-and-take deliberation process that will improve the prospects of a synchronized withdrawal and increase the likelihood that these very same countries will continue to support Afghanistan after a drawdown.

We are only months into an Afghan dialogue that has seen a significant share of hiccups. Over time, the Trump administration may very well conclude that the Taliban are not ready to make peace with their fellow Afghans or are uninterested in compromising. The history of intra-Afghan peace talks is one unfortunately filled with disappointment, miscalculation, and devious intentions.

But the United States can’t allow this history to obstruct the art of the possible. And as hard as it is to envision, peace in Afghanistan is indeed possible.

Ambassador Charles Ray (retired) is a fellow at the American College of National Security Leaders.