Hail to the Deep: A Strategy for Submarines 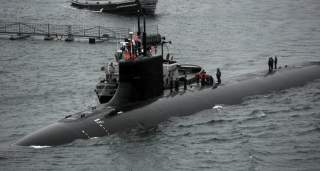 IT’S EASY to forget the virtues of submarines, which lurk beneath not only the waters but also the consciousness of most Americans. They aren’t as iconic as fighter jets or as visceral as tanks. But they can deny a stronger enemy navy control of important waters. Afterward they can exercise command of the sea, blockading or projecting power onto enemy shores with impunity. These elusive warships, in other words, pack an outsized punch.

Submarine operations spread progressively westward as the navy seized Pacific islands where forward bases could be built. Nearby bases let U.S. submariners establish a near-constant presence in Asian seas, sinking even more merchant shipping while pummeling the Imperial Japanese Navy from below. As the tide turned in the Pacific, undersea warfare made an indispensable contribution to American “command of the sea,” meaning near-total control of important sea areas.

And late in the war, Fluckey’s boat USS Barb took the fight directly to Japan, engaging in gun duels against Japanese shore sites. A landing party even went ashore to blow up a train. Such theatrics aside, Harvard professor Stephen Rosen maintains that a submarine blockade of Japan could have compelled Tokyo to surrender—even had President Harry Truman declined to order the atomic bombings of Hiroshima and Nagasaki. That’s high praise for these humble-looking ships of war.

Sea denial, sea command, the exploitation of command: submarine operations span the range of naval missions. Yet despite a century’s proof of submarines’ efficacy, from World War I in the Atlantic to the competition with China today, the classics of sea-power theory—the closest thing seafarers have to a how-to manual of naval combat—are puzzlingly silent on how to employ them in wartime or peacetime. The classics concentrate overwhelmingly on surface warfare, scanting undersea combat. It is high time to bring submarines into the canon.

AS AMERICAN submariners like to boast, some ships are built to submerge while others are made to submerge—once! There’s truth to that jest. First, these are warships that operate in three, not two, dimensions. In this sense they resemble combat aircraft, which can overfly surface fleets at altitudes of their choice. Adding that z-axis to submarines’ maneuvering space lets them operate not just near but also within the defensive perimeters around enemy formations. Think about the German U-boat lurking underneath a U.S. Navy destroyer in the World War II film The Enemy Below.

Surface vessels navigate across what amounts to a featureless plain, whereas submarines roam within a vast, three-dimensional column of water. This flexibility opens up tactical and operational vistas for submarine skippers that are unavailable to their surface brethren, whose ships lumber around in (mostly) plain sight. On the other hand, sub crews have to contend with terrain when operating in shallow water. Undersea warfare resembles land warfare in that sense. Soldiers work around mountains, valleys and defiles. Submariners must take account of the sea floor’s uneven if not shifting topography—in the near-shore environment in particular.

By contrast, submariners go to extravagant lengths to hide. Loath to give away their presence—and thereby compromise their defenses—submariners typically operate their sonar sets in “passive” mode. They listen for telltale sounds emanating from enemy boats. Once they hear another ship’s engineering plant or other noise, they can identify, track and target it. This acoustic cat-and-mouse game works both ways. Running silent helps a boat evade detection. Slowing to a crawl quiets noise from the propulsion machinery.

Third, submarines are loners for the most part. Surface engagements are about concentrating firepower at decisive places on the map to overwhelm an opponent. Submarine warfare is about individual units hunting for action. Surface ships generally steam in concentric formations centered around “high-value units” such as aircraft carriers or amphibious transports. Outlying picket ships guard the high-value unit against surface, aerial or subsurface assault. A layered defense constitutes the carrier’s best chance of survival in a contested environment. Once in range, the formation projects offensive firepower against a hostile fleet or onto hostile shores.

By contrast, the submarine’s operating characteristics and need to remain unseen make independent operations its prime mode of action. Communicating with fellow boats increases the dangers of detection, as does operating in packs with them. Plus, passive detection represents a submarine’s best way to find adversary shipping. Passive sonar works best at low speeds, when the sub makes little noise of its own to obscure sounds emanating from an opponent. Sprinting short distances and pausing to listen is one tactic. Trailing a towed-array sonar—a “tail” festooned with hydrophones—behind the boat is another. A towed array lets crews hear minute sounds with even less interference from their own machinery.

While navies sometimes attach submarines to surface task groups, turning them loose in the depths remains the best way to prosecute undersea warfare. Freedom of action boosts an entrepreneurial crew’s chances of staying hidden, of finding enemy ships in the briny deep or on the surface, and of striking hard should circumstances warrant. Independence thus magnifies their combat potential. These disparities—technology, the radically different setting, this proclivity for stealth—add up to an approach to sea combat so different from surface warfare that it merits a fresh look. Sea-power theory schools judgment—and can improve the practice of undersea operations.

PERHAPS THE silence of the great works is less puzzling than it seems. Alfred Thayer Mahan (1840–1914) was the second president of the Naval War College and the author of The Influence of Sea Power upon History, 1660–1783, probably history’s most consequential treatise on maritime strategy. But his masterwork appeared long before submarines proved their mettle on oceanic battlefields. Mahan died in late 1914, after the guns of August rang out but before German U-boats commenced their rampage against Allied shipping. Mahan acknowledged the potential of submarine warfare in a vague way, yet never incorporated undersea combat into his theories.

Mahan’s contemporary, the English scholar Julian Corbett, likewise published his signature treatise before submarines reached their potential. His 1911 work Some Principles of Maritime Strategy drew primarily on the age of sail, which was the main fount of insights into naval war for fin de siècle historians. Corbett (1854–1922) was an adviser to Admiral Jacky Fisher, Great Britain’s top naval officer, who masterminded Royal Navy operations during World War I. But he, too, did not incorporate insights from the Great War. In short, history’s foremost naval historians perished just as undersea warfare started coming into its own. No theorist of comparable stature finished their work.

This oversight carries practical consequences. With few precepts to lift their gaze toward larger things, submariners find themselves consumed with engineering and administration. This is doubly true for the all-nuclear U.S. Navy submarine force. A Fluckey can make things up as he goes, and excel. Nevertheless, a more systematic approach to the subsurface domain is long overdue. What lessons might be extracted from the greats?

CORBETT LONGED for the age of sail. He longed in particular for the eighteenth century, when classifying warships was a straightforward matter. Clear purposes simplify the problem of designing and employing fleets to dispute, obtain or exercise command of the sea. A neat division of labor also makes things easier for analysts of maritime affairs. Let’s take Corbett’s basic precepts in turn.

First, there’s sea denial, whereby a lesser fleet contests a more powerful opponent’s preeminence. That’s where the U.S. Pacific Fleet found itself vis-à-vis the Imperial Japanese Navy in 1941–1942, with the Pearl Harbor fleet demolished and replacement ships still being built. Even the strongest force cannot be strong everywhere, at all times. Uneven superiority grants a weaker adversary a number of combatant options. By grouping assets, it can make itself superior at select points on the map despite its overall inferiority. Corbett notes that a savvy contender can mount “minor counterattacks,” small-scale assaults on soft spots in a dominant foe’s defenses.

Second, there’s command of the sea, sometimes termed “sea control.” Mahan defines command as “overbearing power on the sea which drives the enemy’s flag from it, or allows it to appear only as a fugitive.” For Corbett, as for Mahan, seizing command is the paramount goal of navies. To overpower an antagonist, statesmen and commanders can mass dispersed forces, order new ships built, court allies, or induce the adversary to disperse or waste his strength. The ultimate aim: a victorious counteroffensive. Disputing command—the sea-denial phase—is merely a precursor to winning command and its fruits.