Hamas Gets an Ideological Makeover 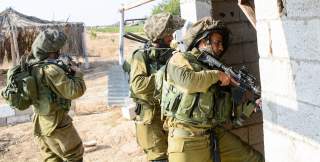 Palestinian leaders hit the headlines twice this week—once on May 3, when President Mahmoud Abbas was welcomed to the White House by President Trump and two days earlier, on May 1, when outgoing Hamas politburo chief Khaled Meshal launched the movement’s new “Document of General Principles and Policies” at a press conference in Doha.

The Washington presidential summit understandably garnered more attention, but it is the Hamas Doha document that may well be remembered as having a more significant and lasting impact on the Palestinian future and even on prospects for an eventual peace. The Hamas Document of General Principles and Policies, several years in the making, does not directly replace the existing Hamas Covenant (or Charter) of 1988. However, the contrast between the two documents is significant, and it is worth reading the two back to back. In a subsequent interview, Khaled Meshal described the new document as reflecting “we are not a rigid ideological organization . . . that we are a dynamic and adaptive organization and that we are eager to change if it is in the best interests of our people. In the future, Hamas will issue more papers and policy guidelines to deal with new realities.”

The headlines of the new Hamas document are consequential in five important arenas, and it is worth briefly listing them:

• Palestinian politics: in terms of the Palestinian internal political system, Hamas commits itself to “managing its Palestinian relations on the basis of pluralism, democracy, national partnership, acceptance of the other and the adoption of dialogue.” It talks of bolstering unity and accepts the PLO as a national framework to be “preserved, developed and rebuilt on democratic foundations,” stressing the foremost necessity of “free and fair elections” (Articles 28 to 30). Regarding Palestinian politics, the PLO and democracy, this is major new departure from the original Hamas covenant.

• The two-state: in the document, Hamas considers as a formula of national consensus “the establishment of a fully sovereign and independent Palestinian state, with Jerusalem as its capital along the lines of June 4, 1967, with the return of the refugees and the displaced to their homes from which they were expelled.” Hamas raises this option while adhering to its principled commitment to “the full and complete liberation of Palestine from the river to the sea,” and while maintaining its “rejection of the Zionist entity” or “relinquishing any Palestinian rights” (Article 20). The acceptance of the ‘67 lines in practice—of, in effect, the two-state option, as part of an agreed national platform (even while adhering to the more maximalist aspiration in theory) —is in stark contrast to the old charter.

• Defining the problem, Zionism not Jews: the 1988 covenant was a horrendously anti-Semitic document. Its text was replete with references to warmongering Jews, their secret societies, their wealth and “control of the world media, news agencies, the press, publishing houses, broadcasting stations.” In short, it was abhorrent. The new document contains none of those references. By contrast, it affirms that, for Hamas, “its conflict is with the Zionist project, not with the Jews because of their religion. Hamas does not wage a struggle against the Jews because they are Jewish but wages a struggle against the Zionists who occupy Palestine” (Articles 16 and 17). While some make the case that opposing Zionism and Israel is itself anti-Semitic, that is a contentious and often spurious argument. What is clear is that Hamas has, in certain key respects, revisited its own Jewish question.

• Hamas and the Arab/Muslim world: in the new document, Hamas “opposes intervention in the internal affairs of any country” or being “drawn into disputes and conflicts that take place among different countries” (Article 37). Hamas also defines its own movement as a “Palestinian Islamic national liberation and resistance movement” (Article 1). This is a clear move away from Article 2 of the old 1988 Covenant, which defines Hamas as the “Islamic Resistance Movement,” “one of the wings of Moslem Brotherhood in Palestine.” The signal is clear, important and largely intended for a regional audience.

• Resistance: the document argues that resisting the occupation “with all means and methods is a legitimate right guaranteed by . . . international norms and laws.” It also affirms that Palestinians can “develop” and “diversify” “the means and mechanisms of resistance” (Articles 25 and 26). Later (Article 39) it states that “from a legal and humanitarian perspective, the liberation of Palestine is a legitimate activity.” So, armed struggle remains front and center for Hamas—including, it seems, the use of indiscriminate violence against civilians—but a window has been opened both for clarifying what international law and international legality have to say about the boundaries of legitimate armed struggle, and also, implicitly at least, to other nonviolent forms of resistance. The old covenant gave no hint of other kinds of resistance, or of grounding Hamas’ actions in international legality, and even dismissed these.

The document is apparently a product of lengthy, ongoing and painstaking internal deliberation and consensus building within the movement. It is certainly the case that the text has been published against the backdrop of enhanced internal and external pressure on Hamas; regional developments (notably in Egypt) have been to the movement’s detriment; and there is an apparent growing salience for Hamas of doing what is needed to retain control of Gaza. The document also comes on the eve of a long-awaited leadership transition, with Khaled Meshal imminently due to step down from his current position, there is a component of legacy here.

But it would be too reductionist to only consider these factors. The document builds on and solidifies public messaging that has been conducted by various Hamas’ leaders, and in particular by Meshal, over several years. The potential acceptance of the 1967 lines as part of a unified Palestinian national platform and accord (implicitly, therefore, of two states) and support for democratic elections and internal Palestinian institutional reform had been floated on several occasions in interviews and op-eds in the Western and Arabic press, by Khaled Meshal and other leaders in the movement, including Mahmoud al-Zahar and Mousa Abu Marzouk. The periods of more intense external messaging regarding shifts in the Hamas’ position coincided with the participation and victory in Palestinian elections, as well as national unity efforts, in 2007–2008 and subsequently with the early period of the so-called “Arab Spring,” especially the convulsions in Egypt of 2011–2013. In fact, the position of accepting the 1967 lines in practice has roots that go further back to the founder of the movement, Sheikh Ahmad Yassin.

The document therefore represents the culmination and most developed articulation of a multiyear process of change and consensus building within the movement, which has been led by Meshal himself. It offers some clarification and much important signaling for several audiences and, when the moment is ripe, it offers a platform for helping to end Palestinian division and advance international engagement with Hamas.

Unsurprisingly, the document has been met with an intense degree of criticism. Perhaps encouragingly, that criticism has come from very different directions. For some, Hamas has gone too far in shedding its liberation and resistance credentials; for others, it has not gone nearly far enough. Attacks from the more maximalist camp, accusing Hamas of appeasement and of acting from a position of weakness will only gain traction if there are significant internal defections and peeling-off of support. Thus far, there are not indications of that being the case. Preventing that from happening was a big part of the reason for the document taking so long to see the light of day, and of the document itself being an internal compromise.

Hamas has also been careful to insulate itself from repeating what are considered to be the mistakes made by the PLO and Fatah—of preemptively disarming, both literally and ideologically, without achieving genuinely significant quid pro quos and advances for the Palestinian cause. In this respect, the three conditions issued for Hamas to join the peace process by the Quartet following the Palestinian parliamentary elections in 2006 (recognize Israel, accept previous agreements, renounce terror) were predictably counterproductive. They have basically served as a litmus test for what Hamas will not do so as to avoid being branded as having capitulated to the Quartet in exchange for nothing serious (and nothing serious is very much what is on offer from Israel).

The more prevalent criticism, in the West at least, is that the new Hamas document does too little, that it is basically an exercise in spin and deception. That was to be expected as an argument deployed politically by certain quarters for the purposes of point-scoring and to avoid engaging substantively with the positions expressed in the document. But as a serious and substantive critique by serious people, an approach that simply dismisses the document is curiously naive and inadequate, especially when one takes into account the context in which the document was launched and the dynamics of how resistance/liberation movements tend to evolve.