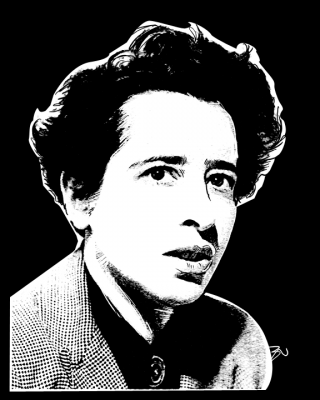 Much (though not all) of the controversy surrounding that book turned on Arendt’s portrait of Adolf Eichmann as a thoughtless, nondescript functionary who never really understood what he was doing, and was therefore not so different from the legions of clerks, secretaries, mechanics and plumbers who were required to keep the trains running and the ovens burning. Seizing on Eichmann’s own impenitent statements when he was hiding in Argentina, which were indisputably anti-Semitic and genocidal, Arendt’s critics insisted that she got it wrong, that Eichmann was anything but banal; his deeds were as heinous and intentional as his Israeli accusers had said all along. But that criticism lost sight of Arendt’s observation that Eichmann’s anti-Semitism had evolved over time as he lost whatever conscience he had by absorbing and accepting the genocidal aims of his superiors—his statements when he was a fugitive in Argentina did not reflect the changes he had undergone in the 1930s—and though he didn’t think for himself, his “thoughtlessness” did not absolve him of guilt. Most important, her critics tended to ignore the larger point she was making about the nature of totalitarianism and, by implication, about our modern condition. Namely, she saw and described how so many normal people could be transformed into Schreibtischtäter, or desk murderers, because instead of confronting the reality of their deeds, even when that reality was right in front of their eyes, they simply followed the rules of their society. It just so happened that in Nazi Germany the rules of society included the commission of hideous crimes. In the twentieth century, with the collapse of religion and traditional authority, external social norms were taking precedence over internalized but ungrounded morality, and that was a problem for everyone.

For Arendt, Eichmann was only an extreme illustration of this phenomenon, so extreme—and this proved deeply offensive to many of her readers—that his life and career as a mediocrity elevated by chance to the position of mass murderer had to be seen as in some sense “comic” because of the enormous gap that existed between his deeds and his motives. The consequences of his acts were monstrous, the intentions behind them petty. This was the stuff of Chaplin and silent comedy, when a slip on a banana peel or a pie in the face could escalate into social chaos. As Arendt wrote, “The horrible can be not only ludicrous but outright funny.” Mary McCarthy, with her refined aesthetic sensibility, understood her friend and said she found the book exhilarating, like a chorus from Mozart.

Morgenthau saw Arendt’s point entirely and agreed with it. The “banality of evil,” he said, meant that “there exists no correspondence between the evil done and the evildoer. The evildoer can be a minor figure in a bureaucratic machine believing in the presuppositions of the doctrine. He executes almost mechanically, bureaucratically, the mandates of that doctrine.” Here again, Morgenthau grasped what Arendt’s critics did not: Eichmann may have become genocidally anti-Semitic as he rose to a position of influence in the Third Reich, but he did not have to hate Jews in order to murder them. There were numerous other dedicated and opportunistic bureaucrats living in Nazi Germany who likewise would have done what he did without giving it a second thought, as long as they were abiding by society’s rules while advancing their own careers (or advancing their own careers while abiding by society’s rules). And for Morgenthau, the lesson taught by totalitarianism—though many liberals had a hard time accepting it—was that “people not only strive for freedom and are willing to die for freedom but that they also strive for order and are willing to die for order.” Almost gleefully, he pointed out that this “represents a denial of the optimism of the eighteenth and nineteenth centuries.”

ARENDT, THE more compassionate personality, struggled to retain a ray of light in the “dark times” she and Morgenthau were living through, and for hope against hope she turned, of all places, to the failed Hungarian revolution of 1956. Before they were crushed by the Soviet military, the rebels of Budapest had developed a council system for public discussion that spread spontaneously throughout the entire country. These were genuinely grassroots organizations—“spaces of freedom”—because they were “the only political organs for people who belonged to no party.” Discussion could be open, nonpartisan, independent of particular agendas, built up out of the personal experience and outlook of each participating individual. In Arendt’s words, they had the capability of establishing the power not of “the many” but of “every one”—much, she said, as the assemblies and townships had in early America.

Such councils, Arendt observed, had appeared many times before: during the French Revolution, in 1870–1871 during and after the siege of Paris by the Prussian army, in 1905 and 1917 in pre-Bolshevik Russia, and after World War I among German soldiers and workers. They had many names: communes, Räte, soviets. Thomas Jefferson himself had something similar in mind when he suggested dividing the United States into wards where people could join in discussion of the common good apart from the bureaucratized formalities of the electoral framework. The fact that similar councils had emerged in so many different countries under such different circumstances indicated to Arendt that they were expressions of a fundamental political impulse—not “democracy” in the sense of mass voting and simple rule of the majority, but a more horizontal process in which everyone got to express an opinion, exchange ideas and be personally involved in the decisions of the group. It’s little wonder that the 1960s theorists of “participatory democracy” thought so highly of Hannah Arendt.

Arendt’s celebration of voluntary council systems was her way of preserving human freedom and plurality in the face of the overwhelming forces arrayed against them, not only by totalitarianism but also by the bureaucratic mass societies of the liberal democracies that, in their own way, threatened human liberty. The dour Morgenthau would have none of it, and his arguments against her qualified optimism must have been ones Arendt heard again and again through the decades of their friendship. How, he asked, could the open, pluralistic spaces of council systems be safeguarded in a world where power dominated and evil was ubiquitous? It was the same problem that always confronted pacifists and conscientious objectors: weakness might be a virtue, but it was still weakness. This was a dilemma Arendt was never able to resolve. About the practical difficulties of the council idea, Morgenthau went on, Arendt had nothing to say, and though he was writing in praise of his friend, he couldn’t resist pointing out what he called the “romantic element in Hannah Arendt’s conception of freedom.”

Still, he was not wholly unsympathetic. Rather than merely criticize his “intellectual companion,” he offered support of a kind by acknowledging the quality of pessimism and desperation in her thinking, which was clearly something he liked about her, the only appropriate stance for a thoughtful person living in modern times. “Perhaps,” he said, “one can argue that the theoretical character of Hannah Arendt’s political philosophy is a symptom of this impossibility to think creatively in a hopeless political situation.” Arendt tried to keep one small door open for optimism. Morgenthau insisted on slamming it shut. To think, he said, was to suffer: “Consciousness does not save man from perdition, but it makes him understand the source and end of his fate.” The challenge, in his mind, was learning to live in an unpredictable, often-savage world without hope. If mankind was catapulting down the road to hell, at least one could recognize the signposts. That was realism.