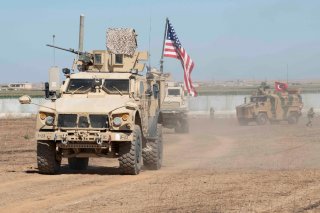 The U.S.-led mission in eastern Syria, which involves significant international and local partner participation, is a cornerstone of the Counter-ISIL Coalition’s ongoing effort to fight remaining Islamic State elements and prevent the group’s resurgence in the wake of its territorial defeat in March 2019. By late 2019, some 2,000 U.S. Special Forces in Syria anchored a local force of some 60,000 Syrian fighters to combat ISIS. The U.S. force in Syria also supports ongoing efforts to target Al Qaeda elements in Syria, including those intent on carrying out attacks targeting U.S. interests such as Hurras al-Din. In September 2020, a U.S. drone attack near Idlib killed a senior Al Qaeda leader whose network was reportedly planning attacks against Western targets, including the United States. U.S. forces at the al-Tanf military base also serve as a bulwark against Russian, Iranian, and Iranian proxy forces. Withdrawing the small deployment of U.S. forces from Syria—which President Trump announced he planned to do several times—would create a power vacuum that Russia would fill. For example, shortly after U.S. troops abandoned a military base near Aleppo, Russian forces took over the U.S.-built facility. By any measure, Syria policy lies at the intersection of U.S. counterterrorism and interstate competition challenges. “In short,” former Counter-ISIL Coalition Coordinator Brett McGurk argues, “the U.S. campaign against ISIS is not—and never was—an “endless war” of the sort that Trump decried in his February 2019 State of the Union address.”

It was designed from the beginning to keep the United States out of the kind of expensive entanglements that Trump rightly condemns. Iraqis and Syrians, not Americans, are doing most of the fighting. The coalition, not just Washington, is footing the bill. And unlike the United States’ 2003 invasion of Iraq, this campaign enjoys widespread domestic and international support.

Speaking in August 2020, CENTCOM commander General Kenneth F. McKenzie Jr. anticipated that American and NATO forces would maintain “a long-term presence” in Iraq, not only to fight ISIS but as a check against the activities of Iran and its proxies in Iraq. Such deployments are critical to contain threats and check the activities of state actors, while building up local partner capability to do so on their own. By February 2021, Gen. McKenzie made this point clear: “Our goal moving forward is to continue to develop and enable the ability of our local partners to maintain the fight against ISIS in their respective areas without external assistance.”

An increasingly common manifestation of interstate strategic power competition is the use of militant and terrorist proxies. Consider the extensive role of Shia militias in Syria acting as proxies of Iran and Russia, Shia militias operating as Iranian proxies in Iraq, Russian mercenaries fighting in Libya with Russian government logistical support, or Russia offering bounties to Afghan militants to kill U.S. troops in Afghanistan. Separatist rebels in Ukraine used advanced weaponry they received from Russia, while Iran enabled Houthis in Yemen to deploy surface-to-surface missiles, precision-guided anti-ship missiles, and weaponized drone swarm attacks. Iran’s attack on Saudi oil installations at Abqaiq involved drones launched by Shia militant groups in Iraq, while drone attacks targeting Saudi Arabia in 2021 underscored the increasingly integrated operational activities of Iran’s proxies in Iraq and Yemen. Groups like Hezbollah already point to America’s interest in shifting to great power competition with Russia and China as evidence that the United States might consider approaching militant groups differently. But any effort to deal with Iran will have to contend with Tehran’s asymmetric warfare in the gray zone between war and peace. Pushing back on Russian and Chinese adventurism around the world will include areas of operation where counterterrorism tools and partnerships can play critical roles in a broader interstate competition.

As the Biden administration reviews current counterterrorism policies, it should make every effort to view both counterterrorism and great power competition not in binary terms of victory or defeat, but rather as ongoing efforts—short of both war and peace—in which both lethal and non-lethal tools are employed to compete with adversaries and disrupt acts of terrorism. Under any reorganization, the U.S. military will still play critical counterterrorism roles, both taking the lead in cases where terrorism threatens the homeland or U.S. interests abroad and supporting partner-led efforts elsewhere around the world. Such decisions, however, should be made strategically and based on a list circumstances under which U.S. military assets could be deployed abroad, in small but open-ended rotations or quick reaction forces acting in lead or support roles. Examples could include threats to the homeland, low-cost big-dividend counterterrorism opportunities, or the risk that declining to participate in a counterterrorism effort could incur great power competition costs.

Small counterterrorism missions in places like Afghanistan, Iraq, Syria, or Africa may be necessary to prevent terrorist groups from controlling territory or plotting foreign attacks from terrorist safe havens. Such deployments need not entail U.S.-led missions; they could be in support of partner-led initiatives such as the French-led Operation Barkhane in the Sahel region. In Iraq, where 2,500 U.S. troops are deployed, NATO announced plans to increase its military deployment from 500 to 4,000 troops and to expand its training mission beyond Baghdad. Even in Afghanistan, the Kabul government is likely to seek U.S funding to keep on Western contractors to help with a variety of critical needs, including security. Such hotspots typically also play important roles in great power competition. As the Biden team builds off its newly released Interim National Security Strategic Guidance report, it would do well to recognize that the Venn diagram overlap between counterterrorism and great power competition presents more opportunities than challenges.

Dr. Matthew Levitt is the Fromer-Wexler fellow and director of the Reinhard program on counterterrorism and intelligence at The Washington Institute for Near East Policy. Levitt is an adjunct professor at Georgetown University’s Security Studies program and is the author of Rethinking U.S. Efforts on Counterterrorism: Toward a Sustainable Plan Two Decades After 9/11, part of The Washington Institute’s Transition 2021 series.