Has China Got Everyone Wrong? 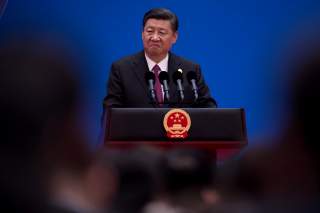 There is an argument that the West got China wrong. It argues that the assumption that China’s economic opening would lead to its political liberalization and transformation into a “responsible stakeholder” was incorrect. In fact, American policy advisors even concluded that basing Washington’s policy towards China on these assumptions has been a failure. This point-of-view claims China is a country that not only has taken advantage of the rules-based world order but also one that got away with it abusing it. China has grown into a monstrous economic power that is not constrained by the global rules, but instead is a “ruthless stakeholder.”

Indeed, China is providing more and more evidence that it is not willing to abide by international law and does not hesitate to act unilaterally in matters it considers critical for its interests—such as in the South China Sea. Beijing’s four-no’s strategy to ignore the Arbitral Tribunal ruling from 2016—no participation, no acceptance, no recognition and no enforcement—remains one of most striking examples of open disregard for the rules-based international order. But such conclusion seems too generous for China and too premature. China's ability to "shake" the current order is hard to deny, but changes in Washington—namely Trump's policies—are more likely to have stronger ripples across the global rules-based order. Moreover, Beijing may have shaken the status quo, but has not necessarily reached its desired position and still is at risk of a stronger push-back from other countries.

China’s military activities in the South China Sea are not only a concern for its direct neighbors and claimants in the disputed waters; they present high risks and unwelcomed tensions to an already unstable region. Despite earlier assurances from China that it is not militarizing the artificial islands built in the South China Sea, the continued show of force undermines Beijing’s credibility and peaceful intentions. Military build-ups and actions have also become more prominent in the Taiwan Strait, where recently Beijing conducted war games. The question is why is Beijing risking its reputation, and potentially even confrontation, instead of asserting its global position peacefully?

Xi Jinping’s China is ambitious not only in laying out its strategic vision of a new order, but also in racing against time to implement that vision. That dream has many facets well beyond militarising artificial islands in the South China Sea. The Belt and Road Initiative (BRI) involves building ports in places ranging from Africa’s Djibouti to wharves in Vanuatu in the Pacific. China’s BRI also includes securing access to sea and land-routes globally—from the Arctic to Latin America—as well as proposing new global institutions such as the Asian Infrastructure Investment Bank (AIIB). These are all elements of a unified plan for the extension of China’s global reach. Finally, all of these massive and potentially game-changing projects are seen as Xi Jinping’s flagship initiatives.

Beijing's strategy to attain dominance has been primarily based on two key components. The first is incrementally asserting its territorial claims, even if doing so often includes open disregard for the rule of law. The second is offering economic inducements for states to play ball while forging close relationships with key political and business leaders, often with financial incentives.

By many accounts, China's aggressive tactics in the South China Sea seem to have been successful, by both effectively undermining the rules-based order while continuing to expand the range of its Beijing's operations. Whether the international community will respond stronger to China's growing arrogance remains a question, but one thing is sure—while the international community (or certain actors in it) keeps pondering, Beijing has managed to gain the time necessary to further its military plans.

Another issue that concerns more actors globally is China's economic statecraft. Initially, the BRI projects have been hailed as both the most significant change in global history and China’s gift to the world. In fact, many enjoyed the excitement of the new economic and transportation infrastructure opportunities that Chinese initiatives offered. Beijing's generosity has been well received, but not without varying levels of reservations about the political implications of Chinese money. Furthermore, the global context has helped to strengthen this perception. For example, the U.S. protectionist agenda, the Europian Union's self-absorption, and Japan's low-profile economy have only boosted the view that China is filling a void in global leadership. After all, China's global projects of the BRI and the AIIB gained the support of even those who had ongoing territorial disputes with China, including India, Malaysia, Vietnam, and the Philippines.

Yet, the Belt and Road Initiative—perhaps the most anticipated project among the developing economies—has become a subject of skepticism and scrutiny. For instance, debt traps and compromised national strategic assets have become the most feared outcomes of the BRI. Furthermore, Sri Lanka's case of its ill-fated Hambantota Port remains the poster-warning for many. Sri Lanka's $1 billion in Chinese loans were used as leverage to give Bejing a controlling interest in, and ninety-nine-year lease over, the Hambantota Port. As a result, the perception that Chinese aid and loans are a trap is spreading around the South Pacific islands.

Also, something has changed over the past months, and there is a growing wave of push-back from around the globe led by "natural rivals," too-close-to-comfort neighbors, and even more distant countries. Concerns have also been voiced by countries who have no geographical security concerns vis-à-vis China, like New Zealand or the Czech Republic. While the scale and intensity of push-back vary, one concern is universal—that Chinese economic initiatives translate too directly into the capacity to extort political influence over the recipient country. For example, to some degree, most Chinese preferences have been incrementally met over the years through international support for Beijing and silence on its taboo topics such as Taiwan, Tibet and human rights. But China's political influence now exceeds many other countries' levels of tolerance—particularly given Bejing's influence includes meddling with economic partners' domestic politics.

In Australia, for example, there is an ongoing debate over Chinese influence. This includes Four Corners, a report released in June 2017, which exposed the personal connections of Chinese-born business people, not only with Australian politicians but also with high ranking UN officials. In America, concerns are stronger over Russian meddling into U.S. domestic politics, but the Chinese presence at universities is also a matter of a widespread discomfort. Reports show that the Chinese Community Party has been setting up ‘cells’ at the University of Illinois, while the Chinese Students Scholars Associations (CSSAs) across the country have been distributing money for activities and engagement praising the Chinese government. Elsewhere, in Central Europe, the concern about Chinese state influence is not a distant concept either. A website, called Chinfluence, collects the cases of Chinese political and economic influence in the Czech Republic, Slovakia and Hungary.

China's fast-lane to global influence has been pursued through the exploitation of that most common of human weaknesses—greed and fear. Aiming at the top leadership and by-passing lengthy processes through corruption has proved effective for Bejing. But only for short-term and in certain countries.

Seeking to influence politicians is rather costly and can be only useful in the short term. In democratic countries, the political mandate is comparatively short, although former politicians can remain influential and high profile public voices. In the case of Australia, former Labour Senator Sam Dastyari demonstrates China’s attempts to cultivate influence and how it could backfire. Financial donations from an Australian-Chinese businessman, combined with public statements that seemed to echo the Chinese state’s line on the South China Sea, brought about the end of Dastyari’s political career. It also fuelled an ongoing debate over legislative changes relating to foreign interference and foreign donations.

Malaysia’s May general election, which overthrew Najib Razak and over sixty years of his party’s rule also shows the risks for China in building relationships with selected individuals. China’s top-down mindset dictates its strategy of forging relationships with targeted individuals, which is effective and fast in the short-term, but which fails to build a foundation for long-term. In other words, China fails to institutionalize relationships that stretch beyond personal connections with those leaders should they fall or leave office.

Najib Razak of Malaysia, Hun Sen of Cambodia, and Rodrigo Duterte of the Philippines all fit into this template. So far, only Hun Sen—who has dissolved his opposition party heading to the July elections—has proved the strategy useful. In addition, Duterte has proven to be a game-changer in the lawfare in the South China Sea by disregarding the legal victory from the Tribunal Arbitral ruling for the sake of improving relations with Beijing. But, as a populist leader, he is also subject to his nation’s swinging mood.

In contrast, China’s relationship with Vietnam is an example of a relationship which does involve a few long-standing and close affinities extending beyond personal benefits. Based on a party-to-party relationship, Hanoi and Beijing have developed a history of close ties dating back a couple of decades. Yet, instead of nurturing that relationship, Beijing’s rush to assert its position in the South China Sea has pushed its fellow communist regime away. In fact, that rift has been to the degree that even though Hanoi is traditionally suspicious of America, Vietnam has invited an American aircraft carrier to visit and is working on strategic partnerships with Washington and its allies. Given the size and importance of Vietnam, the costs to the Chinese state in its relationship with Hanoi might seem insignificant in comparison to Beijing’s perceived value of the South China Sea claims. But souring the relationship with Vietnam—including recently preventing it from conducting oil and gas explorations or China’s dispatching of long-range bombers to the Paracels—is hurting its relationships by stirring up the otherwise relatively pacified periphery.