Has a Color Revolution Come to Russia? Probably Not. 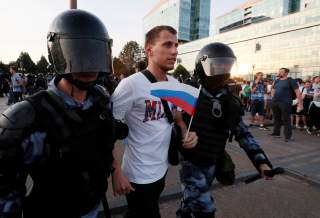 The protests that have broken out in Moscow and in other parts of Russia have excited those anxiously awaiting the next popular manifestation that will trigger a colored revolution in Russia itself. This sort of short-term gaming provides for interesting speculation, but is missing the larger, long-term picture. Whether a particular protest is successful in changing anything or not (for instance, getting candidates registered for a municipal election or preventing a park from being used as a construction site for a new cathedral) is less crucial than seeing how two trendlines—the 2024 succession question and the entry into adulthood of Russia’s first truly post-Soviet generation—are intersecting.

Russians are apt to protest, particularly against poor economic performance, but what seems to make this most recent set of demonstrations different is that it is occurring against the backdrop of the first forays into defining how Russia will be governed when Vladimir Putin’s second set of presidential terms expires. It bears remembering that there was unrest and unease in Russia prior to the 2008 “solution” to the presidential term limit conundrum (the decision to have prime minister Dmitry Medvedev switch roles with Putin). This time, this process is starting much earlier, partly because Putin is older (and the chances of illness or incapacity are higher) and because the Kremlin political technologists have still not, in the past eleven years, been able to create a stable political process that can smoothly process leadership transitions.

Should the constitution be changed to give Putin lifetime tenure in office, as was done in China for Xi Jinping? Should Putin follow in the path of Nursultan Nazarbayev, whose team itself adopted one of the proposed 2008 scenarios for Putin, itself based on the Singaporean approach for Lee Kuan Yew—an emeritus position that still allowed for final supervision? Creating a union state with Belarus that would put Putin above a national presidency? Or is it time for generational transition and to turn the reins over to younger men (since no women seem to plausibly make the short list) altogether?

All political questions have winners and losers, and how the succession is managed is of paramount, existential interest to the different Kremlin clans. Some of those clans and their leaders depend entirely on a personal relationship with Putin for their existence, so the prospect of his replacement is quite risky. For others, a shift to a more institutional system of power safeguards their positions. The existence of the protests—and how they are handled, with what degree of repression and what degree of accommodation—also creates risks and opportunities for different groups. Alexei Navalny’s anti-corruption activities are dangerous to some Kremlin insiders but tacitly tolerated by others who hope to use his revelations as ammunition against their internal opponents.

The generational component of the protests also matters. Lyubov Sobol, who has emerged as the public face of the Moscow protests, is part of “Generation P”—that cohort of Russians who have come to political maturity with Putin as an omnipresent figure in Russian politics, whether as president or prime minister. Born in 1987, she—and many of the other rank and file protesters—have no memory of the Soviet Union and only childhood memories of the collapse of the 1990s. She entered adulthood at a time of economic growth and a return of prosperity.

For some “Generation P” members, whose experience was that of a recovering Russia rediscovering its place in the world, Putin’s arguments that the West is attempting to keep Russia from its rightful place in the sun is an argument that resonates. For others, however, Putin's long tenure calls into question why he continually needs power to finish the job he started in 2000. Putin and his advisors during the 2000s cited the threat from oligarchs corrupting the government and perverting Russian democracy as one of the main reasons for creating a vertical of power. But Russia has effectively new oligarchs and the economy is stagnating—and political repression is not going to change those realities.

The protests also mark the setbacks in the plans to create a sustainable long-term framework for the Kremlin. During the 2000s, Putin’s key domestic policy advisor Vladislav Surkov cited as his inspiration for Russia’s future the Liberal Democratic Party in Japan or the Congress Party in India: ruling parties that nevertheless won elections and were capable of governing—and mediating leadership transitions. United Russia is by no means a similar structure: it is a Russian “party of power” but its record as a governing party and being able to deliver to its constituents is far more mixed. Proposed reforms for the State Duma elections to decrease the number of seats assigned by party and to return to individual candidates contesting seats are being driven by the realization that voters are far less likely to cast ballots for the institutional United Russia candidates on a party list basis, even if they are willing to still give mandates to pro-Putin candidates.

The Kremlin has its work cut out for it: to retain control of the political process that still depends, in the end, on electoral legitimacy. The protests are a warning sign of the problems lying ahead.