Has the DeSantis Doctrine Arrived? 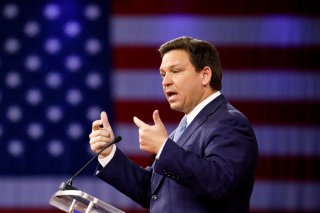 The recently concluded National Conservatism conference in Miami, Florida (where I was invited as a panelist) featured three senators and a governor, a veritable line-up for those who are keen to see the direction of the American conservative movement. Much has been written about it, and much will be. In short, the conference, in its third consecutive year, was a much more coherent affair than the last two. It didn’t feature Douglas Murray, for example. The absence of a panel on Ukraine, and the inclusion of two on China, was also a statement in itself, and in line with the sensibilities of the American electorate, most recently evident in a major poll.

There were some standard ritualistic denunciations of libertarianism and movement conservatism (most notably the toxic gender ideology and establishment Republican cravenness in rolling it back), as well as advocacy for policies which would delight both card-carrying libertarians and national conservatives, including shrinking government power, defunding higher-education, school choice, rolling back government and university bureaucracies, shrinking the national security state, reducing the bio-medical bureaucratic superstructure, gutting unchecked foreign aid, and most importantly, foreign policy retrenchment. It was clear who national conservatives are fighting against: an overwhelming but structurally diffused liberal-internationalist edifice. Consider how the wonky debates in the Conservative Political Action Coalition used to be circa 2011 before it turned into the superficial show that it is now, and one can get the idea of how the debates in Nat Con (as this conference is called) are shaping up. It’s a fusion of ideas, just not the fusionism one is used to seeing in the last five decades.

A growing movement, by definition, needs some dilution and difference of opinion. It’s a natural law of history. It is also ritualistically opposed from predictable quarters. But more importantly, the event became something of a “coronation” by featuring a ferocious campaign speech by the governor of Florida, Ron DeSantis, ostensibly the star of the show and the prospective frontrunner of the future GOP leadership race. And it was by far the most interesting speech of the conference, to paraphrase Winston Churchill, pregnant with possibilities, by a “master of the unsaid words.”

Governors, especially those who are seeking re-election, do not usually talk about foreign policy unless absolutely necessary. That is a disadvantage for those who have a national spotlight and are considered to be the potential presidential candidate. The advantages, however, are that they don’t have to focus on foreign policy—it’s not in the direct purview of state governance—and they can hedge their positions to see which way the wind is blowing. Nevertheless, a platform speech such as the one given at Nat Con is a way to glimpse into someone’s basic worldview.

So, what are the roots of the DeSantis doctrine (if one may) and what can we understand about the foreign policy of a President DeSantis? It’s always early and difficult to translate speech into policy, but at the risk of simplification, there are three distinct threads. One, a very narrow Robert Taft-style conservative nationalism, opposed to any and every global institutionalism and order building abroad. Two, protectionism and balancing China, to the point of having coercive trade diplomacy and border and labor mobility control. Three, and crucially, balancing the ideological roots of a consensus foreign policy which is funded, bred, and nurtured in the higher-ed/national-security bureaucracy echo chamber, and then rolling it back. Each of these instincts is separate and connected.

Some of the rhetoric was standard GOP arguments, about laws to teach kids in school, about the victims of Communist regimes. “They need to know about the body count. In the 20th century, at the hands of Marxist-Leninist regimes, over 100 million people perished as the result of Communist dictatorships,” DeSantis said. Others were more New Right (or old prewar Right, whichever name one prefers.) “Places like Davos. I look at these people at the World Economic Forum, and I’m like, they just view us as a bunch of peasants. I can tell you, things like the World Economic Forum are dead on arrival in the state of Florida.”

In Florida, we’ve launched an initiative to get American civics back in our schools in a really major way…because we have an obligation to produce people who are going to be able to discharge the duties of being an American citizen. And you don’t do that by graduating people who are listless vessels: you’ve got to give them a proper foundation so that they can make sense of the world around them.

In fact, this fight against the transnational “wokes,” is key to DeSantis and his worldview.

I think this is ideology run amok. I think you’re seeing it all across a variety of institutions… Because I think when Reagan came on the scene, for example, it was really big government that was to blame and big government that needed to be reeled in. Yes, we still need to do that. Don’t get me wrong. But you now have a woke mind virus that has infected all these other institutions.

This was also a hint at crossing massive labor mobility fueled by unchecked mass migration with force if necessary. DeSantis rallied against the “rule of law breaking down at the southern border between the United States and Mexico” and “massive numbers of illegal aliens pouring across the border, record sex trafficking, record human trafficking, record drug trafficking.” He added, “the fentanyl that China is making to poison our society is getting into this country through the southern border. And now the leading cause of death for people 18 to 45 is overdose from fentanyl. So it’s been a policy disaster. But it’s also been a constitutional disaster.”

He also pointed out the unaccountable bureaucracy that is a symbol of rights-based movements, which are often undemocratic and “funded by people like George Soros go into office with their mission being that they are going to ‘reform’ the criminal justice system.” A special ire was saved for liberal reformist law officials. “You cannot do that as a prosecutor: it is an executive position. ‘Reform’ would require legislative action.”

…obviously, free enterprise is the best economic system. But that is a means to an end: it’s a means to having a good fulfilling life and a prosperous society. It’s not an end in and of itself. And we need to make sure that we have that firmly in mind. The United States is a nation that has an economy, not the other way around. And our economy should be geared toward helping our own people. So you see, what’s been done over the last generation, the late ‘90s, they said, we need to give China most-favored-nation trade status, put them into the World Trade Organization. That has not worked out the way they said it would. It has made some people in the United States rich, and it’s made a lot of people a lot worse off. It’s certainly made China much more powerful and much more dominant, to the extent that we’re dependent on them for key things involving our own economy. So that’s not the best for economics. It’s certainly not the best in terms of geopolitics. And it’s not the best in terms of when we have security issues, as in COVID.

This was quite clearly not the conservatism of Paul Ryan.

Ultimately, however, DeSantis’ biggest challenge in domestic policy will be the same as the one in foreign policy; woke, unaccountable, totalitarian, faceless and transnational bureaucracy, opposed to nationalism and realism, with an ideological straight line from higher-ed to foreign aid. The roots of foreign policy are the same as the ones in domestic politics. Consider that the Department of Defense has an education activity office, which houses its own diversity officer, who is a former army woman, who writes about “taking a break from white nonsense.” Consider the reasons and justifications behind the billions of dollars given to Ukraine and trillions to Afghanistan by the same people who refused to safeguard American borders. Consider the institutional push to “fight against fascism” at both home and abroad, where anything an inch to the right of Trotsky is considered fascist. Consider the coordinated leaks; the comments about abortion laws from the national security bureaucracy; the Covid-19 mandates on members of the armed forces; the intelligence agencies’ hunt for “right-wing terrorists” while completely ignoring BLM and Antifa violence; the critical race theory-induced federal reading materials; the billions of tax dollars spent in global advocacy and LGBT rights promotion at home and abroad, through government agencies, USAID, Radio Free Europe/Radio Liberty, embassies, and national-security-funded NGOs and “civil society orgs” abroad. The people behind these policies are the same, they share the same ideology, they promote the same worldview, and they are fueled by the same crusading, homogenizing, and revolutionary impulse at home and abroad.