Has Donald Trump Betrayed His Base? 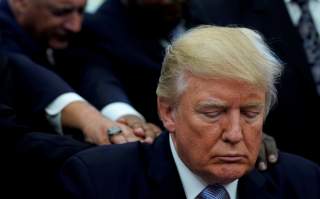 When a relationship goes bad, it is not always clear what exactly constitutes the last straw. This is also the case for Donald Trump supporters. For some on the antiwar right, it looked like it might be bombing of targets in Syria in April, which seemed an entry point into the Syrian civil war, anti-Assad, implicitly pro-ISIS and the beginnings of quagmire in any case. But it proved to be none of those things.

For others, most notably Julius Krein, editor during the campaign of an important pro-Trump blog, it was that Trump supposedly gave rhetorical succor to neo-Nazis and Klansman after Charlottesville. I don’t think a fair reading Trump’s actual remarks sustain that charge, but repetition in the media has undeniably made it politically true.

Then there is the more gradual realization that Trump has probably been won over to the neoconservative position on Iran, views Obama’s deal cutting Iran’s nuclear program as an abomination, and seems to be moving inexorably to scrap the deal, and reinstitute a regime of extreme hostility towards Tehran, culminating in an Iranian nuclear weapon or war, or both. During the campaign, all this was ambiguous—Trump could talk about the Joint Comprehensive Plan of Action (JCPOA) with Iran as a bad deal to constrain its nuclear ambitions, but often in terms that implied less than total hostility—as with his complaint that it didn’t even require Iran use American companies to rebuild its infrastructure. For neoconservatives who have been playing with regime change and destruction of the Iranian state scenarios for years, greater opportunities for Texas based oil service companies was hardly a desired endgame.

But Iran too is a future danger. Despite Nikki Haley’s speech at AEI, the Trump administration has not yet scrapped the JCPOA, and there are major figures in his administration who don’t want to. They may not be fans of it, but they realize that unilaterally scrapping a carefully negotiated five-power agreement that most major world powers support would not advance American foreign policy goals in any realm. Perhaps, one thought as a hopeful Trump voter, the president will listen to them.

Then there was the seemingly forced departure of Steve Bannon from the White House—the major figure associated with the core Trump populist message and the most powerful voice against mainstream Wall Street/pro donor Republicanism within the administration. With him gone, who, if anyone, in the White House will raise the concerns of the Trump base with any actual sympathy?

Trump’s weaknesses—his vanity, his lack of intellectual preparation—were no secret to a great many of his supporters. But they were counterbalanced: the man had courage, seemed unusually impervious to liberal criticisms, and had made sure that at least some Trump agenda people, Bannon in particular, were in the White House. Some good things would probably get done with infrastructure, trade and immigration control.

That last issue, of course, was the key to Trump’s campaign, the single issue which elevated Trump from the Republican field and assured his victory. Trump was never a comic book nativist—his businesses employed scores of immigrants. But he recognized the difference between controlled immigration and inundation: he mocked German chancellor Angela Merkel’s policies; he turned the crimes committed by illegal immigrants into a regular trope; he backed not only building a wall, but the reform of legal immigration to reduce numbers and give greater priority to immigrants with the skills and education to assimilate into the American middle class. In short, he seemed to get it—the argument that continuous and relatively unrestricted mass immigration puts America’s future as democratic country with widely shared common values and a substantial middle class in jeopardy.

And then, in a blink of an eye, it meant nothing. It is not that Trump entered into negotiations or traded on DACA—almost anyone would have, and few, even on the right, were eager to deport people who apparently hadn’t broken any laws. It’s that he got nothing in return—no movement towards raising the requirements for legal immigration and ending chain immigration, no enforcement measures which would deter employers from hiring illegal aliens. The apparent capitulation to Chuck Schumer and Nancy Pelosi didn’t come in negotiations, with experts at the table, but at a dinner. And Trump, being Trump, had no tight grasp of the details of what he was negotiating about.

Unless of course the most cynical explanation bandied about on Twitter is true—that he is ready to sell out his base and flout his campaign promises for a let up in the investigatory pressures on him and his family. It may be that the narrow nature of Trump’s victory doomed his presidency from the outset: he came into office without much of an electoral mandate, and clearly had little sense of whom to hire or how to govern.

It’s my belief that the Russia investigation is a fishing expedition about nothing—a conclusion increasingly signaled by the liberal anti-Trumpists who have quietly shifted their focus for impeachment speculation from collusion with Russia to obstruction of justice. But Mueller’s investigation has clearly spooked Trump, rendering him politically weak and vulnerable. One senses, or at least intuits, that he would probably do anything at this point to ensure the survival of his family’s wealth. Sell out his base on immigration. Done. Start a conflict with Iran? That would be, of course, distracting and probably raise his poll numbers for a while. (A conflict with North Korea would probably be too risky.) So, one can hardly rule it out.

There have always been some voices some on the anti-war, globalism-skeptic right who warned that Trump—because of his character flaws—would do more damage to their causes by winning than by losing. I didn’t agree with this, having long ago accepted that in politics, the best can be the enemy of the good. But the danger Trump poses to the tripartite and—six months ago at least—increasingly ascendant positions of restrained foreign policy, more regulated immigration and renegotiated trade, can’t really be denied. Quite the contrary.

On Thursday morning the polemical writer Ann Coulter, author of a widely read pro-Trump work and many pro-Trump columns, tweeted, “If we’re not getting a wall, I’d prefer President Pence.” She essentially rescinded her backing of Trump. Coulter is a bellwether, as important on the outside as Bannon was on the inside, the most famous of many who submerged their doubts about Trump’s preparation and character because, simply, he said so many things during the campaign which were courageous, perceptive, and in their view and mine, simply correct. I’ve heard (from a left-wing journalist) Trump described as the perfector of a kind of an idiot savant version of paleoconservatism—he could say the right phases, with excellent cadence and timing, without understanding or believing any of it. It’s a joke of course, but it would be more funny if it wasn’t on us.