Has the Iranian Government Lost Control Over the Protests? 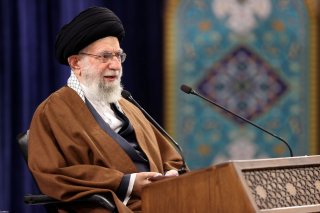 Reports indicate that Irian is deploying its proxy forces to assist its coercive apparatus in cracking down on protesters. Some observers described this as a psychological warfare tactic to deter Iranians from joining the anti-regime protests. These reports, however, appear accurate and demonstrate the regime’s failure to control the ongoing revolution with local forces.

The ongoing social unrest in Iran started on September 16, after the death of Mahsa Amini, a twenty-two-year-old Kurdish woman murdered by the Islamic Republic’s “morality police.” The protests quickly spread throughout the country and the regime’s security forces could not contain them despite using brutal force.

The Islamic Revolutionary Guards Corps (IRGC) and its Basij militia, police forces, and even plainclothes security personnel from the civil offices used extreme violence to suppress the unrest. Videos posted on social media show government forces using live ammunition against protesters. Media reports indicate that 389 protesters have been killed, including fifty-five children, while another 15,345 were detained as of November 17.

However, the use of brutal violence against protesters and issuing detainees to death only provoked more popular anger. Mehdi Rafiei, head of the Iranian Students’ Opinion Center, warned that the people’s “anger towards the regime” reached a dangerous and unstoppable point. Workers across key industries went on strike and the movement is growing, tipping the scales against the regime.

Moreover, various reports suggest low morale and heavy losses among the regime’s security forces. Some police officers have refused to kill their fellow citizens or left their posts with veiled excuses such as illness. Videos posted on social media show the police retreating from or even siding with protesters. A video published by the Melliun website showed the fatigue of the police forces in Isfahan. Reports from unofficial sources suggested that hospitals affiliated with the armed forces in Tehran and other provinces are facing a shortage of beds due to the high number of injured Basij, IRGC, and police force personnel.

Gen. Hossein Rahimi, the chief of Law Enforcement Forces (LEF) in Tehran, said that his forces haven’t slept for several nights due to a heavy workload and long hours. Gen. Hossein Ashtari, the commander in chief of the LEF, was seen among a group of officers of the LEF Special Unit trying to boost their morale by saying, “if Qassem Soleimani was with us now, he would say you did a good job … don’t doubt for a bit, our path is right.” Mohsen Mansouri, the governor of Tehran, complained about the “serious deficiencies in the existing security infrastructure.”

The regime’s attempts to strengthen the morale of its forces have fallen flat. The Islamic Majlis voted to amend the annual budget and increased the salaries of the security forces by 20 percent. However, this move was merely symbolic because of the ongoing financial crisis, which makes it impossible to implement these economic incentives. The massive spike in food prices amidst the protests renders the proposed salary increase entirely ineffective.

With people’s anger towards the regime reaching a boiling point and the security forces either reluctant or unable to suppress the protests, the regime decided to resort to proxy forces. On November 1, the London-based Iran International TV channel reported that the regime transferred 150 Iraqi Hashd al-Shaabi and Kata’ib Hezbollah fighters via a special flight from Baghdad airport to Mashhad in northeastern Iran. Forces from the Lebanese Hezbollah group were deployed to help Iran’s Basij militia in their crackdown on protesters. Lebanese-accented Arabic speaker forces were seen helping Revolutionary Guards and the Basij violently beating Iranian protesters in Tehran and Zahedan. An unverified document dated September 18 allegedly leaked from the office of Hezbollah’s chief Hassan Nasrallah indicated that 4,000 forces would be deployed to Iran. Another unverified document, apparently leaked from the same source dated October 14, revealed that an extra 9,500 personnel from unit 133 and unit 910 of Hezbollah are being prepared to be deployed to defend the regime.

Numerous reports also indicate that the forces of the Fatemiyoun Brigade are deployed in Zahedan. Fatemiyoun, a militia group formed in 2014 by Gen. Qassem Soleimani (the slain commander of the Quds Force), was drawn from Shia Afghan refugees in Iran to fight in Syria. Many of these forces joined the group voluntarily but others were coerced to join the group or joined in exchange for Iranian citizenship and money. A leaked document revealed a letter written by the head of the police force of Fars Province to the IRGC intelligence organization (Sazeman Hefazat Ettela’at-e Sepah) asking to “deploy the Fatemiyoun militia as soon as possible.” Videos published on social media also show the militia of Pakistani Shia, known as the Zeynabiyoun Brigade, entering Iran from the eastern borders of Sistan and Baluchistan province.

These reports are hardly surprising because, in the past, regime officials said that in a time of need, they would use “the Iraqi Hashd al-Shaabi, the Afghan Fatemiyoun, the Pakistani Zeynabiyoun, and [even] the Yemeni Houthis [to] save the Revolution.” Such remarks about the necessity of deploying proxy forces to save the regime make it clear that the regime is aware of its profound legitimacy deficit.

However, the regime is still not without other powerful tools to subdue the revolutionary forces. It has a wide array of forces, intelligence, and monitoring systems at its disposal, but as I have written elsewhere, there are ways to weaken them. Given the fact that the economy is already in shambles from sanctions, monumental corruption, and mismanagement, intensifying sanctions on Tehran would make it even more difficult for the regime to continue funding its local coercive apparatus as well as its proxy forces.