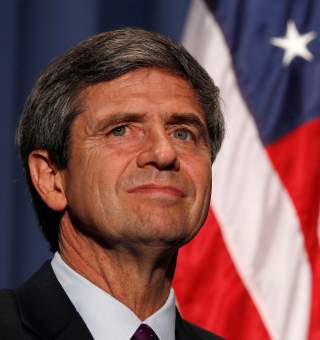 While favoring President Trump’s opening negotiations with North Korea, Sestak believes the president faltered on the execution. “I think engagement with North Korea is a positive thing, but I don’t think we went into that negotiation at the highest level of our government prepared for exactly how we wanted to come out,” he said. “I am not criticizing that he went to that meeting, I just feel that he did not go in with his full preparations by his team of having worked certain issues to know what we wanted the result to be.”

Sestak described how, as president, he would change our diplomatic strategy on the Korean Peninsula to include more regional players. “To some degree I feel that America’s greatest power is the power to convene, to bring together others for a common cause that serves us all. And I think that surprising the leaders of South Korea or Japan, who are absolutely instrumental to our security (not just their own), I think is something that is dismissive of their rightful place at the table to help negotiate with us. That doesn’t mean you can’t go forward on your own, it means you need to bring them in the process and not surprise them.”

“Do I believe engagement is the right thing? Absolutely. Do I believe the goal should be denuclearization? Absolutely. Do I think it can be achieved? It’s gonna be extraordinarily difficult this time. It has for decades been an issue that has eluded many Commanders-in-Chief, but I think this is one where you should not be trusting of the leader of North Korea. Ronald Reagan said it well: trust but verify. And I feel that that approach is not being taken,” concluded Sestak. As an example, he says he would not have suspended joint military exercises without the North Koreans showing they were taking actions (not just intentions) to move towards U.S. goals first.

Joe Sestak believes he’s uniquely equipped to deal with a rising China. That starts with challenging the idea that a bigger military is necessarily a better military. As an admiral he proposed downsizing the navy from 275 ships to 260. “[W]e need to move in cyberspace and censors…and so we have a force structure that the congressional-military-industrial complex likes, and I said no, we’ve got to move into cyber and the other areas. It’s less cost, but it’s much more effective,” he told TNI. Sestak described China’s Belt and Road Initiative and their plans to create a 5G network as (quoting the Prime Minister of Malaysia) “neocolonialism.” We have to “understand that we’ve been giving away, by the lack of leadership in the world, to an illiberal, might-makes-right world order.”

Sestak agrees with the proposition that if the United States cedes dominance of the world, it will be replaced my malcontents. “[W]e have walked away from our leadership of a rules-based world order, to now where autocrats from Turkey to Venezuela, Philippines to Hungary, feel like the [Saudi Arabian] Crown Prince as he high-fives Putin and feels that he doesn’t have to have any concern about murdering an American resident in an embassy because there’s no consequences from a rules-based world order.”

In the fall of 2007, during Joe Sestak’s freshman year in Congress, an article from The Hill claimed Sestak had “fast developed a reputation for being a temperamental and demanding boss.” According to the reporting, “Aides are expected to work seven days a week, including holidays, often 14 hours each day, going for months without a day off. These are very long hours even by Capitol Hill standards.” Furthermore, it quotes The Navy Times, which reported in 2005 that Sestak had been relieved as Deputy Chief of Naval Operations due to “poor command climate.” Fellow 2020 competitor Senator Amy Klobuchar of Minnesota has also come under fire for her management style and treatment of her staff.

When asked about this issue, Sestak’s response was clear and direct. “My temperament never went beyond my expectations to move America to a better position. And everyone who worked for me was very good…[A]t times, with this recession, [I] asked a lot of my people but never more than I put in myself. And if you do look at all four years of our staff, you will find that our turnover rate the last couple years was below anywhere else.” Sestak claimed the long hours were required for constituent services in the aftermath of the recession. He says everyone on his current presidential campaign has worked for him in the past.

There was confusion when the former Congressman said in his announcement, “if one had any feel for how Americans felt that 2016 election year, you would have sided with the Republicans, as I did.” The candidate clarified that he had not voted for the Republican ticket: “I supported the Democratic presidency, but you can’t find a comment out there where I ever put down the Republican Party.” In his words, he would rather work with the opposite side, “not beat up on” them.

“The point I was trying to make is that starting with the year of the Tea Party, 2010, the DNA of America has changed as we came out of that Great Recession. When I first got in, people wanted to know who I was. Who’s this navy admiral who’s an independent who became a Democrat? Who are you, what do you believe in, what’s going on? But by the time I ran in 2010, it was different. After having gone through that recession, they wanted to know, did I know them and what they had gone through? ‘Do you know what it’s like here?’”

Joe Sestak is incredibly proud that during his 2016 Senate primary race, he walked 422 miles across Pennsylvania speaking to voters and holding town halls. “And halfway through it I was called by Senate leadership and [they] said ‘Stop, just fundraise,’ and I said ‘No.’ I said I’m fine on fundraising, but the issue is people want to know that I know them.” Admiral Joe, as his presidential campaign is attempting to nickname him, preferred “being with the people, not being told to go back by the establishment in Washington, DC and sit in my office and fundraise.”

Sestak showed an intuitive understanding of the same populist impulses that have riled not just the United States, but politics around the world. “The people understood, even though they couldn’t tell you specifics, that Washington, DC had become a restricted circle of entrenched political elites who thought they knew better in determining in their own interest of what was best for America, combined with corporate lobbying power that has now outsourced not only jobs but our national security to China.”

“This is the issue. Sometimes Americans, they just want to believe and trust you. But then they can’t believe because they’ve been let down,” Sestak said. That’s why his campaign is being built around the word “accountability.” “Who’s ever been held accountable for their vote on that tragic misadventure in Iraq…And who’s ever been held accountable for that meltdown on Wall Street…And that’s why people today don’t trust. That’s the biggest deficit we have in America today. And that’s why I…[ran] against my party’s establishment. It doesn’t mean I’m not a Democrat. It just means people above party. People above self-interest. People above self, if you’re a public servant.”

“We cannot meet the defining challenges of our time without a united America. It’s the epic challenge of our time, to gain the trust of Americans,” said Sestak, elucidating his conclusion with a naval analogy. “The captain of the ship, they don’t always have to agree with him. But they know he’s willing to be accountable for them. Because if anybody ever feels that the leader is above accountability, like it has happened with Iraq and the results, like Wall Street and the results, then you lose the trust of your crew because they know you’re not going to be held accountable. And that’s what’s happened to the U.S. ship of state. That’s why I didn’t like running against my party’s elite, but it was the right thing to do because I wanted people to trust me, to know I was being accountable. Because I didn’t want to just win, I wanted to govern.”

While originally planning a March announcement, Sestak’s campaign was delayed by a family health scare. As a child, his daughter developed brain cancer, and the medical services provided by the military were a strong motivating factor in Sestak’s original run for Congress. After a false alarm earlier this year, his daughter is in good health.

Already campaigning in Iowa, Joe Sestak will have to walk a lot more miles to catch up to the rest of the field and have the possibility of standing on the July debate stage. When asked if his longshot presidential campaign was a way to apply for a separate office, such as Defense Secretary in a new Democratic administration, Sestak denied it. “I am running for the Presidency of the United States of America. Period.”