Has Netanyahu Defeated the Palestinians? 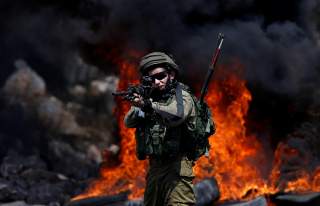 The long-running police investigations into the affairs of Israeli prime minister Benjamin Netanyahu appeared to cross a Rubicon earlier this month. Netanyahu is under suspicion in a number of cases involving alleged bribery, fraud and breach of trust, among other things. A deal has now been reached by the State Prosecutor’s Office for Netanyahu’s former chief of staff, Ari Harow, to turn state’s witness—an arrangement rarely agreed to unless a strong case is being built against a more senior and serious criminal actor.

With the likelihood of his being indicted and speculation as to his longevity in office reaching unprecedented levels, Netanyahu struck back. In a support rally convened by his Likud Party, Netanyahu accused “the thought police in the media,” together with the left, and supported by the Palestinians, of conducting an “unprecedented, obsessive witch-hunt campaign” against him and his family. Their goal, he claimed, was to stage “a government overthrow” to topple “the national camp.” Both the style and substance of Netanyahu’s fiery rhetoric should have sounded very familiar to anyone in America not asleep for the past seven months.

That part of his speech was an appeal to his base. But Netanyahu’s lengthy term in office, multiple electoral successes, and ability to hold together a governing coalition in Israel’s rambunctious political system is also predicated on him having a message that resonates with a broader public. It is a sales pitch that Netanyahu repeated at that rally, that he had “brought the state of Israel to the best situation in its history, a rising global force . . . the state of Israel is diplomatically flourishing.” Netanyahu had beaten back what he had called the “fake-news claim” that without a deal with the Palestinians “Israel will be isolated, weakened and abandoned” facing a “diplomatic tsunami.”

Difficult though it is for his political detractors to acknowledge, Netanyahu’s claim resonates with the public because it reflects something that is real, and that has shifted the center of gravity of Israeli politics further and further to the right. It is a claim that if correct and replicable over time will leave a legacy that lasts well beyond Netanyahu’s premiership and any indictment he might face.

Netanyahu’s assertion is that he is not merely buying time in Israel’s conflict with the Palestinians to improve the terms of an eventual and inevitable compromise. Netanyahu is laying claim to something different—the possibility of ultimate victory, the permanent and definitive defeat of the Palestinians, their national and collective goals.

In over a decade as prime minister, Netanyahu has consistently and unequivocally rejected any plans or practical steps that even begin to address Palestinian aspirations. Netanyahu is all about perpetuating and exacerbating the conflict, not about managing it, let alone resolving it. He seeks out long-neglected scars to poke anew and hones in on what appears most existentially angst-ridden. It has been left to others—ministers, Knesset members and local leaders in Netanyahu’s own Likud Party, and from his governing coalition partners, to articulate the end game in a more open fashion. Their message is clear: there will be no Palestinian state because the West Bank and East Jerusalem are simply Greater Israel.

The approach overturns assumptions that have guided peace efforts and American policy for over a quarter of a century: that Israel has no alternative to an eventual territorial withdrawal and acceptance of something sufficiently resembling an independent sovereign Palestinian state broadly along the 1967 lines. It challenges the presumption that the permanent denial of such an outcome is incompatible with how Israel and Israelis perceive themselves as being a democracy. Additionally, it challenges the peace-effort supposition that this denial would in any way be unacceptable to the key allies on which Israel depends—from Jewish diaspora communities and their political support, to America and its military guarantees, to Europe as Israel’s largest trading partner—and is therefore incompatible with Israel’s positioning of itself as an integrated, open and global trading nation.

After years of failure, those peace-process assumptions have begun to look corroded anyway. Thus, Bibi has gone for the jugular. Earlier in his premiership, Netanyahu nibbled at the edges of this Oslo paradigm, sensing that the consensus achieved internationally was not replicated at home in Israel. Over time, Netanyahu became convinced he could reshape the paradigm. Developments worked in his favor—both those of his making, for which he could claim credit, and those that were out of his control but in sync with the new zeitgeist he was pushing. We have, or so it seems, now entered the phase in which Netanyahu wants to own the new paradigm and to claim victory.

The way in which the Palestinian cause continues to be framed, as one of national liberation, an anti-colonial struggle, appears to have less purchase around the world with a new generation of leaders and publics than it did in the past. On a more practical level, the Non-Aligned Movement (with its commitment to self-determination) containing the majority of the world’s sovereign states, is no longer the significant organizing political vector for those states that it once was. These global historical dynamics are not of Netanyahu’s making, but Israel’s prime minister has seized the moment to advance Israel’s global relations (particularly in Africa and Asia), effectively deploying Israel’s assets in the security, intelligence, cyber and technology fields, as well as the ability to cajole others via the close relationship to the United States and sometimes in an irresponsible way by fuelling perceptions of global Jewish power.

Netanyahu now also brings a personal advantage to the table. His years of experience, insights and personal relationships are appreciated and considered useful by many fellow leaders. For instance, while Netanyahu played no direct role in the election of the Hindu nationalist Bharatiya Janata Party and Narendra Modi, the personal and the political have been interwoven. This has lent an unparalleled vibrancy to the India-Israel relationship and led to Prime Minister Modi visiting Israel in July without visiting the Palestinians. That type of a trip was unimaginable for an Indian leader of yesteryear. Similarly, the Israel-Russia relationship is both institutional and indistinguishable from the ties that have been developed between the persons of Putin and Netanyahu. That link holds true for parts of Africa too, where Israel has made its most significant diplomatic breakthroughs of recent years. Netanyahu attended the Economic Community of West African States summit in Monrovia, Liberia, in June. Later this year, he is due to be hosted in Togo for an Africa-Israel Summit that will include a significant number of African leaders. The Africa-Israel Summit comes after he conducted an extensive tour of East Africa last year. Add to the mix Israel’s blossoming ties with China and Israel’s status as a major global-arms exporter (currently ranked seventh according to the Swedish SIPRI Institute) with an estimated $6.5 billion in military exports in the past year, and one begins to understand Netanyahu’s ability to sell this new paradigm to the Israeli public.

In more traditional bastions of support for Israel, Netanyahu took a calculated gamble—would enough American Jewish support continue to stand with an increasingly illiberal and ethno-nationalist Israel, thereby facilitating the perpetuation of the lopsided U.S.-Israel relationship? Netanyahu bet yes, and he was right. Even the recent fallout with the nonorthodox (reform and conservative) streams of Judaism in the United States (the majority of American Jews) over prayer arrangements at Jerusalem’s Western Wall and over rights to conduct conversions seems unlikely to upend Netanyahu’s winning bet. The very fact that these supposedly most liberal of Jewish communal groups have gone to the mats on narrow parochial concerns while failing to speak out on the ongoing denial of the most basic of rights to the Palestinians can be notched up as another win for Netanyahu.

And then events took a further turn in Netanyahu’s favor with the rise to power in the United States and parts of Central Eastern Europe (and to enhanced prominence elsewhere in Europe and the West) of the very ethno-nationalist trend to which Netanyahu is so committed, working to replace liberal with illiberal democracy. One should not underestimate Israel and Netanyahu’s importance as an ideological and practical avant-garde for this trend.

Closer to home, in the Middle East itself, the ongoing turmoil has relegated the Palestinian issue down the pecking order while encouraging quiet but increased cooperation between Israel and certain Arab states, including on a joint anti-Iran platform. Netanyahu was not behind the Arab uprisings, but he can at least claim an assist in a defining moment that led the region on this trajectory to turmoil, the American invasion of Iraq in 2003.

Meanwhile, against this background and with Israel’s encouragement, alongside more than enough of their own missteps, the Palestinian leadership has been hopelessly divided and unable to strategically adapt to the changing environment.

One should also not exaggerate the picture of Netanyahu’s success. The diplomatic strides and improved relations have thus far translated into very little when it comes to votes at the United Nations and its various agencies, which—while not devastating for Israel—can be bothersome. To the extent to which Netanyahu’s years of experience and personal relationships are a driver for some of this momentum, those will be tested when Israel’s post-Bibi moment arrives. While national liberation may be in decline as a paradigm, the call for equality and civil rights is a powerful rallying cry should the Palestinians go down that path.