Has Obama "Betrayed" Israel at the UN? 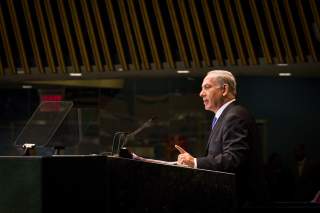 Has America’s president betrayed Israel, as Prime Minister Benjamin Netanyahu and members of his government bitterly accused after President Obama failed to veto a UN Security Council resolution that condemned Israel for its settlements in the West Bank?

True, President Obama told the international community in his address to the UN General Assembly in 2011 that an Israeli-Palestinian peace agreement can only be achieved by the parties themselves, not by outside imposition.

Obama, a former editor of the Harvard Law Review, surely knows the notion that international bodies have no role in the resolution of international conflicts to be entirely spurious, particularly when applied to a belligerent occupation that has been in place for half a century. It is an argument he presumably made to provide Netanyahu more time to advance a two-state agreement with the Palestinians without outside intervention, in the expectation, based on Netanyahu’s previous solemn promises, that he would do so.

Netanyahu’s “j’accuse” against Obama and his administration is a concoction of the lies and deceptions that have characterized Israel’s defense of its settlement project from the outset.

The Security Council resolution did not contain any reference whatever to terms for a permanent status negotiation (as necessary as such provisions actually are), and therefore did not violate President Obama’s strictures against outside imposition of terms for an agreement. The resolution was limited to a reconfirmation of the flagrant illegality of the settlements in the Occupied Territories and of the changes made unilaterally by Israel to the internationally-recognized pre-1967 border.

Netanyahu lost whatever right he might have thought he had to President Obama’s and the world’s trust when he shamelessly and unapologetically reversed himself and declared publicly during the last Israeli national elections that he would not allow a Palestinian state to come into existence as long as he is Israel’s prime minister. For good measure, he added that he would not remove even a single Jewish settlement, no matter how remote its location from the pre-1967 border, even though such settlements were placed there to block the possibility of a Palestinian state.

Netanyahu and his fellow ministers are accusing President Obama of having violated President George W. Bush’s promise to support Israel’s retention of certain settlement blocs adjoining the pre-1967 border. They have claimed for some time now that President Bush’s commitment allows them to enlarge construction in these settlement blocs to their heart’s content.

This is a bald-faced lie. Both in his letter to Prime Minister Sharon and in his subsequent references to that letter, President Bush said clearly that his support for Israel’s retention of certain settlement blocs would come into play only when negotiations of the major permanent status issues took place. In 2006, Condoleezza Rice told Israel’s foreign minister Tzipi Livni, “the President did say that at the time of final status it will be necessary to take into account new realities on the ground that have changed since 1967, but under no circumstances… should anyone try and do that in a pre-emptive or predetermined way, because these are issues for negotiation at final status.” [Emphasis added]

Another lie is Netanyahu’s and his fellow ministers’ criticism of Obama for his acceptance of a resolution that refers to Israel’s settlements as “illegal,” instead of “illegitimate”—the euphemism Obama’s administration has used until now.

Israel’s government knows there is no real difference between these two terms—if settlements were legal, they would also be legitimate. They also know that it was Israel’s legal advisor to its ministry of foreign affairs Theodor Meron who ruled in a formal communication dated September 18, 1967, immediately following the 1967 war, that “civilian settlement in the administered territories contravene explicit provisions of the Fourth Geneva Convention,” and that the prohibition against such settlements is “categorical and not conditional upon the motives of the transfer or its objectives.”

The biggest lie of all has been Netanyahu’s claim to support a two-state solution. His scam should have been obvious to our diplomats from the get go. Why? Because he never presented the two-state idea for formal approval to any of the four governments he has headed. Because the official platform of the Likud opposes Palestinian statehood anywhere in Palestine. And because most ministers who form Netanyahu’s government are members of a parliamentary caucus—the largest in Israel’s Knesset—whose official mandate is the prevention of Palestinian statehood anywhere in Palestine.

Is it not high time for Israel’s public to wake up to Netanyahu’s deceptions? The countries that voted for this Security Council resolution are not anti-Semitic outliers. They included every major democratic country that belongs to the Security Council. Not one of them voted for the Zionism is Racism resolution, to which Netanyahu so demagogically compared this resolution. Are UK Prime Minister Theresa May or German Chancellor Angela Merkel, whose foreign minister warmly welcomed the Security Council’s action, anti-Semites? It was only yesterday that Netanyahu boasted of his friendship with Russia’s Putin and China’s Xi Jinping, who voted for the resolution. Are they now Israel’s enemies?

If there has been a betrayal in this latest chapter of America’s relations with Israel, it is Netanyahu who has betrayed President Obama. The Obama administration has done more than any of its predecessors to assure Israel’s security. The tragedy is that everything that President Obama and his predecessors have done to protect Israel’s security will have been for naught as Netanyahu’s mad drive with the settlements towards an apartheid regime threatens to end Israel’s existence as a democratic and Jewish state, something its enemies could not have achieved on their own.

With President-elect Trump and his newly appointed far-right, settlement-promoting ambassador-designate to the Jewish state cheering Netanyahu on, that apartheid outcome is now clearly in sight.

Henry Siegman is President Emeritus of the U.S./Middle East Project. He is a former senior fellow on the Middle East at the Council on Foreign Relations and formerly headed the American Jewish Congress and the Synagogue Council of America.