Has the FBI Created a Constitutional Crisis? 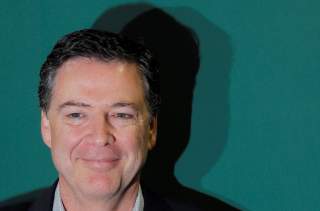 James Comey was a wildcat FBI director who acted outside the chain of command when the bureau was involved in politically sensitive investigations. That’s one conclusion of the Justice Department inspector general’s report on the FBI’s conduct in investigating Hillary Clinton’s use of a private server for official and sensitive email. Comey was “insubordinate” for failing to clear his public remarks about the case with the Justice Department. The attorney general at the time, Loretta Lynch, also acted improperly by meeting with Bill Clinton in June 2016 on her plane while it was on the tarmac in Phoenix, Arizona.

None of this misbehavior, according to the report, was deliberately partisan in nature. The same cannot be said for the text messages between FBI agent Peter Strzok and his mistress, FBI lawyer Lisa Page. When Page asked Strzok in August 2016 to assure her that Trump was “not ever going to become president, right? Right?!”, Strzok replied, “No. No he won't. We'll stop it.” Strzok at the time was lead investigator in the Clinton case. In 2017, he became Robert Mueller’s right-hand G-man in the investigation into the Trump campaign and Russian meddling in the 2016 election, a role he had to forfeit once his texts with Page started coming to light.

The inspector general’s report reveals new details, including new texts between Strzok and Page, but its chief significance is that it makes official what was already obvious: the FBI has been politicized, whether or not that politicization was solely in favor of one party. The confirmation that Comey acted improperly in making the statements he made about the Clinton investigation in fact supports Democrats’ claims that their candidate was a victim of FBI interference in the election. That interference—like Russia’s—is very unlikely to explain why Clinton lost Pennsylvania, Michigan, and Wisconsin, as well as Ohio and Florida, to Donald Trump. Yet the fact of the interference, and its impropriety, is undeniable.

Comey and the FBI may not have had simple partisan motives in the Clinton investigation or the ongoing, post–Comey investigation into the Trump campaign. Rather, they took upon themselves the responsibility of deciding what the public could know and when, and in what contextual light, as if the bureau’s director and certain agents were above any law or command structure and were personally empowered to manage the electoral process, both before and—in the case of the continuing investigations of the Trump campaign—after the election itself. This is not the proper role for the FBI, or any law-enforcement agency. And however neutral in partisan terms men like Comey imagined this guardianship role to be, it cannot help but create opportunities for intentional mischief on the part of officials who do have strong partisan, ideological, career, or other interests. There is no reason to believe that behavior like Comey’s and Strzok’s ended when Comey was fired by Trump and Strzok was reassigned from the Trump-Russia investigation. The history of special counsel investigations, which have routinely become open-ended political hare-hunts, only provides further reason to think that law-enforcement will continue to be corrupted by this semi-political role.

Congress, not unelected officials in the executive branch who constitutionally must answer to the elected president, is the proper institution to lead most investigations into sensitive political matters. If Americans decide that Congress is too partisan to conduct honest investigations, then the remedy is to be found in the next election. As messy and difficult as it may be to obtain clean government and fair elections through the ordinary political process, it is the only way that is consistent with a free people. Comey imagined himself to be an overlord of democracy, and there are reasons to think that Robert Mueller and many others hold similar opinions. They have less, rather than more, legitimacy than Donald Trump, who won an election by the choice of voters according to the rules of the Constitution. The idea that agencies like the FBI are above the Constitution and the chain of command it establishes—as well as the relationship it establishes between elected and unelected officials—is a more serious threat to democracy than anything that has been credibly alleged against Hillary Clinton or Donald Trump. It’s not so much that the investigators are in need of investigation themselves, but that the entire process has to be scrutinized by the American public—and the officials they choose to legislative and govern on their behalf.