Has the Marco Rubio Moment Arrived? 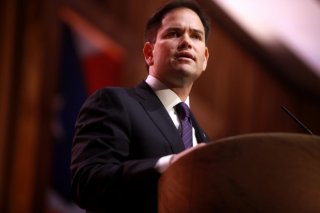 The winner of last night’s Republican presidential candidates debate was Senator Marco Rubio. The runner-up was the Tax Foundation, which was somehow mentioned more times than Ronald Reagan.

This was the CNBC debate, which meant that economic issues were at the forefront. Mercifully, the moderators scrapped the CNN approach of poking Donald Trump with a stick for the entire first hour, and got down to substance rather quickly. Also mercifully, the event was limited to two hours rather than three, one of the many things for which Trump claimed credit throughout the evening.

The center podiums were reserved for Trump and Ben Carson, who recently switched places in the polls between runner-up and frontrunner. Yet the pack leaders seemed largely absent. Carson’s primary contribution was to seem unacquainted with his own tax plan—“Once we put all the facts down, you’ll see that it’s not true” was his rebuff to one of the moderators—while Trump was far less effective than usual. He didn’t even attack Rand Paul’s hair.

Instead, last night was Marco Rubio’s moment. The Florida senator is one of the most luminescent political talents of his generation, yet his strategy has been to stand quietly in the shade, projecting optimism and avoiding fights while he waits for Trump and Carson to fizzle. That plan now seems to be paying off. It was charming little moments—like when he answered a question about his book sales by referring viewers to fine bookstores everywhere—that buoyed Rubio during the debate. These peeks of personality are shrugged off by policy wonks, but they matter to voters.

Rubio’s strongest riposte was when he was asked about Super PACs. “You know, the Democrats have the ultimate Super PAC,” he said. “It’s called the mainstream media.” He then railed against the press for its supine coverage of Hillary Clinton’s Benghazi committee testimony last week. It wasn’t Clinton’s banner week, he said—“it was the week she was exposed as a liar.” One imagines the focus group participants locked in Frank Luntz’s basement cranking their passion dials up to 11.

One of the reasons Rubio shone is that, despite being billed as a debate, there wasn’t a whole lot of disagreement between the candidates. The only memorable confrontation came when Jeb Bush pressed Rubio for having missed so many Senate votes—“what is it, like a French workweek?”—and Rubio acquitted himself handily. Instead, most of the vitriol was focused on the Democrats and, unusually, the moderators. There was even an attempt by Ted Cruz to replicate Newt Gingrich’s famous 2012 debate rant against dumb questions from the media. To each other, the candidates were often congenial; Mike Huckabee even boasted at one point that he was sporting a Donald Trump tie. With few cross-podium punches flying, Rubio’s friendly style was more noticeable.

The overall policy tone of the debate was fairly libertarian, best encapsulated by Chris Christie’s barnburner about why government should leave fantasy football alone. And if Social Security is the third rail of American politics, the candidates grabbed it until their hair stood on end. Ben Carson advocated letting taxpayers opt out of entitlement programs and Mike Huckabee said being honest with seniors about Social Security was a “moral issue.” Rand Paul called for a raise in the retirement age and even jabbed the Baby Boomer generation for having so many children. Paul, by the way, had his strongest debate showing thus far.

Rubio did fine on these subjects; he’s a fiscal conservative on everything except the military (which is to say, not a fiscal conservative at all?). But his victory last night doesn’t mean he’ll be effective in the general election. On foreign policy, he’s an unreconstructed hawk who supported deposing Moammar Gaddafi and getting rough with Bashar al-Assad—not much daylight between him and Hillary Clinton there. On immigration he remains muddled. And however adroit he was in his scuffle with Bush, the fact remains that he’s missed a third of his Senate votes this year. Against Clinton, he’ll have a difficult time repelling charges that he’s inexperienced. Voters already opted for a precocious one-term senator with soaring rhetoric; will they really spring for a second?

Regardless of the answer to that question, the Republican establishment would be wise to consider Rubio. We’ve seen plenty of quotes from Florida bigwigs endorsing Jeb Bush and chiding Rubio for not waiting his turn. Maybe he’s not; maybe he’s too ambitious. But the calculation that conservative voters would support another Bush for president was always utterly tone-deaf. With Jeb having once again left little impression on a debate audience, it may be that the GOP takes a careful look at the rash senator from Florida.