Has Trump Altered the Course of American Foreign Policy? 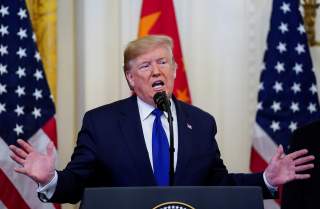 Still, Trump has been consistent in his apparent desire to avoid a fresh conflict abroad. If this holds true through the November election, he would be the first president since Jimmy Carter to avoid one. Consider the recent past. Ronald Reagan sent Marines to Lebanon and invaded Grenada. George H.W. Bush invaded Panama, evicted Saddam Hussein from Kuwait, and sent troops to Somalia. Bill Clinton intervened in the Balkans and Haiti. George W. Bush attacked Afghanistan and Iraq. Barack Obama led a NATO coalition into Libya. Trump has tip-toed up to the brink of war with Iran but refrained from an all-out confrontation. It will be Trump, and Trump alone, who is the Decider. So far, he has been more cautious about sparking any new wars than his recent predecessors, a distinction that probably will not receive the attention that it deserves.