Has the West Reached Its Limit Against Turkey? 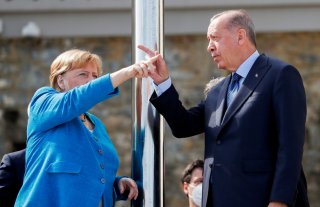 The recent standoff between Turkish President Tayyip Erdogan and ten Western countries over whether Turkey should conform with the European Court of Human Rights (ECHR) decision to release Osman Kavala or whether those ambassadors have violated Article 41 of the Vienna Convention is mostly a technical issue obstructing the bigger picture. What needs to be digested here is not necessarily whether Erdogan would expel their ambassadors but that he could issue such an unprecedented threat without consequence. Indeed, in a move seen by some as U.S. backtracking and “a huge win for Erdogan,” Washington immediately pledged that it would respect Turkey’s domestic affairs in the dispute.

From what is now dubbed the “One Minute” incident—where Ergodan publicly rebuked the late Israeli president Shimon Perez for Israel’s Gaza Offensive—to Turkey’s Peace Spring military incursion into Syria minutes after receiving an insulting letter from Donald Trump, Erdogan has remained willing to defy the West through an autonomous foreign policy which asserts that “the world is bigger than [the] five” United Nations Security Council members.

During the last decade, a pattern has emerged: Erdogan’s increasingly independent foreign policy was met with growing Western acquiescence. For example, Washington tried for seventeen months to convince Turkey to drop the Russian S-400 missile system. When the U.S. lobby effort failed, the United States was forced to impose sanctions through the Countering America’s Adversaries Through Sanctions Act (CAATSA) in December 2020, but it chose to punish Turkey narrowly (on only five out of twelve sanction items as mandated by the law) to not excessively hurt U.S.-Turkish bilateral relations. The U.S. State Department further assured that the sanctions “are not intended to undermine the military capabilities or combat readiness of Turkey,” and that “the sanctions do not apply to SSB [Turkish Ministry of Defense] subsidiaries or affiliates.” Turkey has not only been unfazed by CAATSA, but Erdogan also announced in September the possible acquisition of more S-400s from Russia. On the other side of the Atlantic, the European Union (EU) could not agree on a Franco-Greek sponsored bloc-wide arms embargo imposed upon Turkey’s Syria incursion in October 2019. Furthermore, Greece’s desperate pleas to Brussels to impose sanctions on Turkey for engaging in hydrocarbon drilling in areas that Greece and Cyprus claim as their exclusive maritime zones were rejected by Germany, Spain, Italy, Hungary, and Malta.

Why is the West increasingly unable to influence Turkey’s domestic and foreign policymaking? The answer is that the West’s overall decline has created a conducive environment for Turkey to start resolving a number of decades-old issues, including Kurdistan Workers’ Party terrorism, the Aegean maritime dispute, and the Nagorno-Karabakh conflict.

The last decade has witnessed a rapid economic, social, and political decline among Western democracies. The lasting impact of the ruinous 2008 financial crisis, enduring economic stagnation, low growth, persistent unemployment, and aging and declining populations have all rendered the European economies extremely fragile. In America, the abysmal state of the economy is reflected by the government-induced stimulus packages skyrocketing from $800 billion in 2009 to $3.5 trillion in 2021. The Covid-19 pandemic has further exposed the West’s vulnerabilities. The scenes of overflowing morgues, bodies stored in refrigerated trailers in New York, and the EU members seizing each other’s face masks shipments out of desperation revealed the wealthy Western nations’ vulnerabilities in a time of crisis.

The refugee and migrant influx on both sides of the Atlantic gave rise to populism and strong leaders, threatening democratic values. Eastern EU members have grown increasingly defiant of Brussel’s supranational mandate. Freedom of movement in the EU is not as free as it used to be anymore. The fear was so great that it prompted London to secede from the EU for the sake of its sovereign decision-making. The East-West, North-South divide has never been greater in the European Union, whose motto is “In varietate concordia” (United in diversity).

The economic and political downfall, in turn, triggered social turmoil across the Western world. From the Black Lives Matter riots to mass shootings, and the January 6 “coup attempt” at the U.S. Capitol, the United States is now projecting the impression of a third-world country as opposed to the beacon of democracy and a prosperous superpower. Overwhelming economic and social issues at home have created among American constituents the clamor to put the American democracy and economy first, forcing American policymakers to adopt a timid and risk-averse foreign policy. The byproduct of this risk aversion is new American isolationism which explains the United States’ receding footprint in the Middle East, the eastern Mediterranean, the South Caucasus, and Central Asia. That “risk aversion” is, in fact, one major reason that caused the sensational American cut-and-run from Afghanistan.

Likewise, in Europe, the bloc-wide economic recession, unemployment, and eruption of social turmoil have made European policymakers turn inward—creating a sense of Europe’s own isolationism. Having lost more than forty soldiers since 2013 and seeing no end in sight, Emmanuel Macron has decided to end France’s “forever war” in its former colonies in West Africa and commenced the withdrawal of French soldiers from Mali. For Germany, trade with Turkey is far more important than Greece’s maritime claims in the eastern Mediterranean. (Germany is poised to sell six Type-214 submarines, which would give Turkey an edge in the eastern Mediterranean, drawing anger from the EU member Greece.)

Erdogan has been able to turn the West’s turmoil and its corresponding inability to influence world affairs to Turkey’s advantage. With its ever-growing indigenous defense industry and strong leadership, Turkey scored points in Libya, West Africa, and the southern Caucasus against France, in Syria against the United States, and in eastern Mediterranean and Cyprus against Greece. The surfacing of decades-old intra-European rivalries, a direct result of European decline, has benefited Turkey. In an effort to prevent France from ascending to European leadership in the post-Brexit era, the United Kingdom has sided with France’s political rival, Turkey. For example, Malta, (London’s aide in the EU after Brexit), vetoed the funding for Operation IRINI—the EU naval mission to enforce an arms embargo in Libya, particularly those arms that Turkey intended to deliver to its proxy, the Government of the National Accord that fights the French-backed Libyan warlord Khalifa Haftar. (Currently, Franco-British tensions have reached new heights; as of yesterday, France seized a British fishing boat in the English Channel.) France’s Libyan policy has also irked Italy, prompting Rome’s support for Turkey. The Italy-France row over Libya reached such a point that both countries withdrew their ambassadors in 2019, a first since World War II. When Macron convened the EuroMed 7 summit, an informal group of seven EU Mediterranean states, in Corsica in September 2020, it was Italy, along with Spain, Portugal, and Malta that prevented the French president from using provocative language against Turkey in the summit’s closing remarks. All the above considered, it is no coincidence that among the notable absentees from the recent Kavala Declaration (that infuriated Ankara) are the UK, Italy, and Spain.

Joseph Borrell, the vice-president of the European Union, acknowledged in 2020 that “Europe is facing a situation in which the old empires (China, Russia, and Turkey) are coming back … with an approach on their immediate neighborhood and also globally.” As seen with the recent Kavala incident, the Biden administration has exhibited a persistent aspiration to antagonize Ankara in every possible way, shape, or form. It has been proven time and again that the more Washington wants to hurt Erdogan, the stronger he strikes back. In the backdrop of declining Western global influence, policymakers in Washington and Brussels may need to ask, “Is it a wise decision to confront China, Russia, and Turkey simultaneously?” Perhaps it is time for those Western policymakers to hold an honest conversation with Turkey, a NATO member, and an EU candidate, and understand Turkey’s decades’ old problems. The West will only benefit from working closely with Turkey, not fighting it.