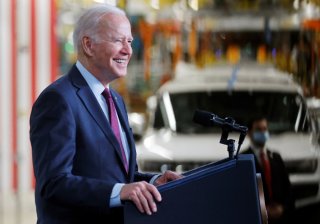 The industrial Heartland of America has played an outsized role in America’s economic history and our politics. The twelve-state region that stretches from Minnesota, Iowa, and Missouri in the west along the Great Lakes and Ohio River Valleys to Pennsylvania and New York in the east was the birthplace of great industries like steel, oil, autos, and aviation that powered the American century. Home, too, to hotly contested political “swing states” that helped deliver Donald Trump the White House in 2016, the region continues to be in the national spotlight in our political discourse.

Today, this section of the country, often unfairly brushed-off as the “Rustbelt,” is, in reality, two Midwests. One of former manufacturing communities that have made the transition to a new, more diverse economy in a changed world, alongside many factory towns that having lost their anchor employers, still struggle.

In Europe and the United Kingdom, there are similar historically significant industrial heartland regions that, as in the United States, are in an unevenly shared economic transition. Communities that still struggle within former industrial powerhouse regions offer fertile ground for leaders who play to attitudes of nativism, nationalism, and nostalgia—and often fuel anti-democratic behavior and sentiments. But as we have written for the Brookings Institution, where former “Rust Belt” communities do find new economic footing, the lure of resentful populism wanes, as residents grow more hopeful for the future.

Economic opportunity gaps by geography remain a root cause of our polarized politics. How do we offset these gaps? How can our leaders at the national and local level best support effective economic transition efforts both at home and among our democratic allies?

These were the questions we raised with 125 leaders from eight Western democracies at a transatlantic summit held earlier this year. Our newly released report shares insights and findings as leaders explored: the causes and challenges posed to democracies from populist movements; the links between economic conditions and populist sentiment; and effective policies and practices for economic transformation in struggling industrial regions.

There is an urgency for our leaders to implement policies, practices, and strategies that facilitate economic development and create new opportunities for residents of older industrial regions—if we are to address a fundamental cause of the appeal of populism that is polarizing our politics.

As the UK’s Rachel Wolf, founding partner of Public First told us:

The reason we care so much about . . . these regions is fundamentally because we are very worried about politics. We are worried that across the developed world there are seismic changes happening in the kinds of politicians that are voted for, the kinds of parties that are voted for, and what that means for everything from transatlantic trade policy, tariffs, the principles of globalization and free markets, down to national immigration policy [. . .] and the degree to which we’re able to take action on climate change, as well as broad economic policy.

As we have observed in recent years, such polarized politics at home threatens the health of transatlantic cooperation—and our democracies themselves. The most important conditions driving support for anti-democratic populism are economic and emerging from within our own borders. It is the failure to diminish geographic economic disparities and opportunity gaps, particularly disparities between thriving global city regions and communities in industrial heartlands, where many residents feel ignored, looked down on, and patronized by national politicians.

Residents’ economic anxieties, concerns about losing their place in a changing world, and perceptions of community decline can increase the appeal of populist messages of nativism, nationalism, isolationism, and economic nostalgia.

Those on both the Left and the Right are capable of fanning the flames of these populist movements and the accompanying polarization. But as we learned at the event, it is the right-wing variant that encourages anti-democratic behavior and distrust of institutions and the press, leading to a breakdown in support for the civil rights of others and nurturing a fierce political polarization that undermines democracies.

But even as many of the root causes of these populist movements are economic, the solutions are inherently political.

Leaders who want to address these root causes must win elections and then empower industrial communities to shape their own unique paths to a brighter economic future while providing the resources and support necessary to get there.

The good news is that there is a middle path that can bring people together and capture elections. It’s an agenda about local pride, place, jobs, opportunity, and even making the planet a better place for their children to inherit.

But the challenge is how to get started—how to effectively communicate and connect with residents of struggling economic regions and how to support them in invigorating local and regional economies.

To effectively aid struggling communities, leaders must first see things as residents do: sadness and anger over the hollowing out of communities; the flight of young people; the loss of local schools and sports leagues; degraded main and high streets; and lost cultural facilities, union halls, local papers, family-owned shops, taverns, and restaurants. The loss of opportunity and the decline of institutions that build and reinforce civic pride leads to a loss of a sense of identity.

In cities and towns that still struggle economically, leadership that focuses on the people, and pays attention to their tangible and immediate needs, can build “permission” to be heard on larger things. Bringing the resources and external investments needed to implement solutions to short-term signs of community distress and degradation can create trust between communities and national leaders—trust that will nurture support and acceptance of additional investments that can move their economies forward in more substantive ways, such as with larger-scale investments in people, infrastructure, skills, and innovation.

We also learned that an effective plan for community economic reinvigoration and renewal has to come from within. It must be owned and operated by community residents and leaders.

Change cannot be “done to” a community or perceived to be coming from others, even if the change is backed by good intentions. From West Germany coming into the former East to rebuild its economy, to the European Union telling Central European communities they must go green, to U.S. coastal progressives offering “solutions” for Heartland people and places—such efforts, though well-intentioned, can have the unintended consequence of triggering negativity and resentment and reminding industrial-community residents of their loss of control.

And instead of treating older industrial communities as “needing to change” a hopeful new future can be built by embracing a communities’ historic identity and building on it—taking it into the future. Tapping the pride of residents in these heartland industrial communities and their legacies of making things and contributing to their nation’s economic and political success.

Perhaps the most important lesson for leaders is that in order to empower these industrial regions’ new success and nurture optimism among community residents is to refrain from talking down to them, patronizing them, or viewing them with pity. Residents don’t like being called “left behind” (in the United States), or in need of “leveling up” (in the United Kingdom). They do not consider themselves “postindustrial,” living in “Rust Belts,” or in need of “restructuring.”

What residents need to hear from their leaders are: “We see you. We understand why you are upset with the conditions of your community. You and your community and future success is a national priority. We are here to support and offer resources for you to build your own future.”

There is a real urgency to this work. Anti-democratic populist movements still pose a threat to our democracies. The report of this summit provides a beginning guide to the messages our leaders must send, and the work leaders at all levels must do to catalyze real opportunity and optimism in these critical regions of our countries.

The future of the industrial heartlands and their residents need be at the center of our leaders’ agenda in the United States and with our allies in Europe.

The stakes are high. Unless local and federal leaders in the Western nations focus on and accelerate economic success for people and places where residents are alienated and feeling ignored or disrepected, these citizens will continue to drive a polarizing populist politics that is undermining both our democracies and our Western alliance.

Jeff Anderson is Professor in the School of Foreign Service and the Department of Government at Georgetown University.

Brian Hanson is Vice-President of Studies at the Chicago Council on Global Affairs.

Andy Westwood is Professor of Government Practice at the University of Manchester, UK.