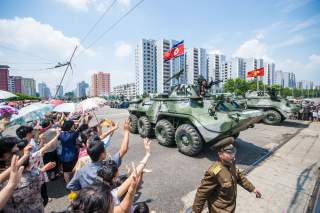 Superficially, National Interest editor Jacob Heilbrunn’s argument for President Donald Trump to personally negotiate a solution to the North Korean crisis with Kim Jong-un seems plausible. Heilbrunn is correct that the essence of this issue is regime security for the DPRK. By extension, this involves prestige for the Kim government, because being treated respectfully by the United States would immensely bolster the regime’s domestic legitimacy after decades of the government failing to deliver the prosperity its internal propaganda has promised. North Korea consistently responds very badly to criticism of the North Korean leadership—largely a function of individuals’ compulsion to demonstrate their loyalty to the guy who could order them promoted or killed on a whim. Conversely, Pyongyang has responded very well on those rare occasions where the U.S. government has given face to North Korean leaders.

And it’s not impossible for the U.S. government to hold its nose and make nice with a despicable foreign tyrant. The United States even started down this road with North Korea itself near the end of the Clinton administration. Secretary of State Madeleine Albright visited North Korea, and there were plans for Bill Clinton to follow, but the clock ran out on his presidency. Many analysts think that was a missed opportunity to permanently improve bilateral relations before things deteriorated again under a Bush administration that was more skeptical about détente with Pyongyang.

Any U.S. president who met with a North Korean paramount leader would face criticism for seemingly disregarding the liberal American values outraged by various aspects of the DRPK’s behavior: cruelly persecuting a large chunk of its population for political offenses, defying multiple United Nations Security Council resolutions forbidding its development of ballistic missiles, and routinely threatening neighboring South Korea with destruction—not to mention broadcasting an apparent eagerness to nuke the U.S. homeland.

But if any U.S. president could pull this off, it’s Trump. Arguably, he entered office with a mandate for a U.S.-DPRK summit meeting. Americans knew before election day that Trump revels in iconoclasm, disregarding many of the practices and positions of past presidents. We also knew that Trump expresses great confidence in his ability to make deals. Trump signaled that he doesn’t buy American exceptionalism or a values-led foreign policy. On occasion, he has equated U.S. behavior in foreign affairs with that of states such as post-democratic Russia (“our country does plenty of killing also”), and he habitually praises the leaders of authoritarian regimes. Most pertinently, prior to his election Trump specifically floated the idea of meeting with Kim Jong-un to work out an agreement.

If, then, your underlying theory is that North Korea just wants respect and assurance that America isn’t hankering to annihilate the regime, the approach of a Trump-Kim meeting might seem attractive. There are, however, some serious and arguably fatal potential problems with treating Kim like a new friend.

While a meeting between Kim and Trump would be dramatic, the important question would involve the lasting impact. Recall that Kim’s father Kim Jong-il met personally with South Korean President Kim Dae-jung in 2000. That did not appreciably improve relations between North and South Korea even in the medium term, beyond winning Kim Dae-jung a Nobel Peace Prize. We also learned afterward that Seoul paid Pyongyang several hundred million dollars to get Kim Jong-il to agree to the meeting.

What would be the substance of an agreement Kim and Trump might be able to reach, giving the demands and constraints on both sides? Heilbrunn envisions the following specifics: U.S. assent to the survival of the North Korean regime though a “nonaggression pact”; “formal recognition of North Korea as a legitimate state,” which I interpret to mean formal diplomatic relations; “intrusive inspections of the North’s nuclear facilities”; withdrawing “the bulk of” U.S. forces form South Korea; and a U.S. statement professing support for “a united and neutral Korea.”

Each of these points is problematic. Senior U.S. officials have on many occasions issued what amount to unilateral nonaggression commitments. The latest came on April 26, when the commander of U.S. forces in the Asia-Pacific region, Adm. Harry Harris, said, “We want to bring Kim Jong Un to his senses, not to his knees.” This collection of repeated assurances has not convinced the North Korean government to stop working on a nuclear missile that can hit a U.S. city. This suggests a “nonaggression pact” would do little to influence North Korean policy.

Heilbrunn proposes two other concessions by the United States. Like the hypothetical Trump-Kim meeting itself, establishing formal diplomatic relations would be a propaganda bonanza for Kim’s government. Critics would rightly call this a reward for bad North Korean behavior, and many South Koreans along with virtually all Japanese would view this as a betrayal of close allies. The larger U.S. concession, even harder to justify, would be the withdrawal of most U.S. troops from South Korea. The presence of U.S. troops is founded on the assessment that the DPRK poses a danger to South Korea. That danger is hardly eliminated under Heilbrunn’s plan, which mentions nothing about changes in the DPRK’s posture or conventional military capabilities, and foresees that North Korea still has “nuclear facilities.”

What Heilbrunn glosses over is what degree of capability Trump could reasonably expect to get the North Koreans to give up in return for these substantial U.S. concessions. There are various possibilities: eliminating all ballistic missiles over a certain range limit, limiting the number of certain classes of missiles, ceasing missile tests, promising to stop work on making nuclear weapons that are deliverable by a missile, eliminating all nuclear bombs but keeping a nuclear power program, capping the number of bombs, and so on. The most important point is this: the United States will not agree to a deal that allows the North Koreans to hold American cities at risk, and the North Koreans either will not agree to a deal that precludes them from holding the United States at risk, or they will cheat on that deal. It is also extremely unlikely that Pyongyang would agree in good faith to an adequately “intrusive” inspection program.

Kim Jong-un would probably welcome a summit meeting with Trump, because the meeting itself would bolster his prestige at home, not to mention the sweetener of whatever fees Pyongyang would extract from Washington for the get-together. It is not at all clear, however, that Kim is interested in bargaining away his aspiration to deploy a nuclear ICBM that could strike Washington, DC or New York City. Nor is it clear that the regime really wants the crisis to end, since the regime derives so much of its legitimacy from the claim that it continuously holds the aggressive Americans at bay. Under these circumstances a Trump-Kim meeting would likely make only a brief, ostentatious splash without achieving fundamental progress toward peace on the Korean Peninsula.

Denny Roy is a Senior Fellow at the East-West Center in Honolulu. His latest book is Return of the Dragon: Rising China and Regional Security (Columbia University Press, 2013).