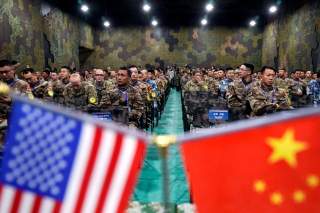 Its $220 billion in foreign exchange reserves ballooned to a staggering $3 trillion.

But what China has lost, especially over the last decade-and-a-half, is the bold impulse to reform that led leaders like Zhu Rongji to undertake significant changes to the state-led sector in the 1990s, as Beijing prepared for its WTO accession.

Today, the prevailing view in the United States is that China is increasingly content to pursue its own standards, privilege its domestic rules and erect rather than demolish walls for foreign competitors.

And so, I continue to encourage China’s leaders to pursue meaningful competitive and commercial reforms, and to do more to foster and protect innovation.

The key to avoiding an Economic Iron Curtain is for China to see its interest in making these reforms and changes.

If China doesn’t move quickly, divorce is a real risk.

While the current trajectory cannot be easily reversed, I offer these considerations for both sides:

First, do no harm.

For example, implement robust rules of engagement to prevent PLA Navy captains from the kind of maneuver that nearly resulted in a collision in the South China Sea last month.

Third, be bold. Open your economy. Have confidence that your firms no longer need to hide behind a wall of government protection.

As for the United States:

First, dial down the rhetoric. Strategic competition is a fact. China does not pose an existential threat to American civilization. In the 242nd year of our great democratic experiment, we should have more confidence in America and the resilience of our system.

We should prepare for the obvious challenges from China. But let’s not sacrifice those values that have made us the strongest, most competitive and most admired country in the world.

Second, enlist partners. And then, working in coalition with these partners, try to foster some workable understandings with Beijing.

The World Trade Organization is perhaps the best example.

It is in desperate need of an upgrade.

So, China and the United States could be part of leading efforts to bring the WTO into the digital age.

In a similar vein, I wish President Trump would reconsider the withdrawal from the Trans-Pacific Partnership.

A TPP 2.0 would offer a ready-made vehicle to shape the trade environment in which Beijing operates.

Third, negotiate with China and find frameworks to resolve issues.

Strong investments in science and engineering.

Openness to the world.

Investment in security and economic partnerships on every continent, but especially in Asia and Europe.

Getting our own policies right is essential to competing with China and to thriving in the twenty-first century.

If the United States and China cannot find a way to develop a workable consensus, it will pose systemic risk of monumental proportions—not just to the global economy, but to international order as we know it and to world peace.

Both countries need an international system that functions—because international order is one of those things that is simply too big to fail. And so the alternative is unacceptable.

And that is why I am hopeful that statesmanship will prevail.

Now, we are proceeding down divergent paths and we are in danger of facing a long winter before we reach what may still be a rather patchy spring. But I believe a spring will come. So the questions are, how long will this winter last, and how much unnecessary dysfunction and pain will be inflicted along the way?

The answer will be determined by the capacity and willingness of leaders in Washington and Beijing to think creatively—and sometimes even disruptively.

In 1972, our leaders established a framework for a world beset by Cold War and locked in ideological conflict.

At various points, they’ve had to recalibrate.

Today’s world looks nothing like the world of the 1970s, or of the 2000s, or even of the years when my friend, Wang Qishan, and I tackled the financial crisis.

We’ve reached another of those consequential moments.

And the stakes are higher than ever before.

We must craft a new framework that works for today’s world, not the world of the past.

And for that, we need statesmanship—wise and strong leadership in Washington and Beijing.

Henry M. Paulson, Jr. is a former Secretary of the Treasury from 2006-2009 and the founder of the Paulson Institute at the University of Chicago. He delivered this speech (which was published here in an abridged form, the full text is available here) on November 7, 2018 at the Bloomberg New Economy Conference in Singapore.