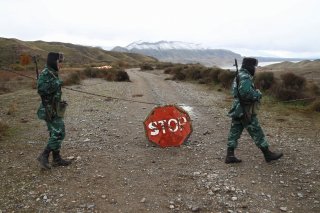 Despite all its military advantages during Forty-Four Day War two years ago, the Azerbaijani army did not enter areas in Karabakh where Armenians are densely populated—avoiding unwanted casualties among civilians was an operational requirement.  Military operations were narrowed focused only in those areas where, historically, Azerbaijanis were in the majority from where they were expelled twenty-eight years ago. Likewise, no critical infrastructure or residential buildings where Armenians are densely populated were seriously damaged. As was previously noted in this publication, these and other factors helped ensure that the Forty-Four Day War had the astonishingly lowest civilian casualty rate in comparison to all other wars in recent decades. This unusually low casualty rate might end up being one of the more important elements that can contribute to the speedy reintegration of both sides.

Last September, a desperate thirty-two-year-old Armenian woman, Izaura Balasanyan, who lives in Karabakh with her four children, was pushed past breaking point by mounting needs and a greedy landlord, and decided to try to escape the Armenian enclave out of desperation. She tried to reach the Azerbaijani-controlled areas, where things are better, but Russian peacekeepers arrested her and handed over back to the Armenian security services. Behind the Russian military and the armored remnants of Armenia’s forces, there are thousands like Izaura— hostages to a decades-long radical nationalism and three-decade-long conflict. The Azerbaijani government cannot reach, communicate, nor help them directly now.

The economic conditions of people living in this grey zone under Armenian control was already dire even before the war, and things have only gotten worse since. Objectively, Azerbaijan, with its rich natural resources and strong economic conditions, can offer more support to individuals in comparison to any country in the region. Azerbaijan’s president, Ilham Aliyev,  said in one of his interviews that Armenian residents of Karabakh approached the Azerbaijani military several times to ask if they could take part in the ongoing massive reconstruction works in the liberated territories. Recently, an influential Telegram channel in Azerbaijan noted that Armenian residents in Karabakh, under the condition of anonymity, have sent emails to the Ministry of Labour and Social Protection of the Population of Azerbaijan to ask about their retirement savings. There are even those who have applied to restore their Azerbaijani citizenship. On numerous different occasions, Azerbaijani officials have repeatedly declared that Azerbaijan considers the residents of Karabakh to be Azerbaijani citizens, and that the state is ready to provide all the social-economic rights and privileges enjoyed by every other Azerbaijani. For this, they only need to restore their formal Azerbaijani citizenship and accept that they are under Baku’s jurisdiction. Those who don’t want to accept this situation are entirely free to peacefully leave the territory of Azerbaijan.

With the war still fresh in the minds of many, we will need time, patience, and enormous efforts to heal wounds, to create reconciliation, and to open a new chapter in the relations between both peoples. However, there is also another, even more serious stumbling block ahead that may yet prevent the reintegration of the Armenian residents of Karabakh into Azerbaijan. This obstacle is crime. More specifically, the radical, criminal elements, including illegally armed groups, that committed crimes against the civilian Azerbaijani population. These elements continue to terrorize the ordinary civilian Armenians of Karabakh, who wish to express their own views and even reintegrate to Azerbaijan. It is almost impossible to create the necessary environment for the speedy and effective reintegration of the Armenian residents without neutralizing these elements. Additionally, the cases of Donbas, Luhansk, South Ossetia, Abkhazia, and Transnistria clearly demonstrate that people under the control of illegal entities are zombified, terrorized, and unable adequately express their free will. The people in the illegal entity in Karabakh are currently in the grip of people like Vitaly Balasanyan. To illustrate what sort of individual we are dealing with here, in the documentary Parts of a Circle: History of the Karabakh Conflict, made by the UK-based Conciliation Resources, Vitaly Balasanyan confessed that it was he himself who first fired upon a peaceful demonstration of Azerbaijanis that killed two victims of the First  Nagorno-Karabakh War in February, 1988.

According to the Article IV of the Trilateral Declaration signed between Azerbaijan, Armenia, and Russia on November 10, 2020, the military units of the Russian Federation—the aforementioned peacekeeping contingent—should have been deployed to Karabakh and the internationally recognized territories of Azerbaijan in parallel with the withdrawal of the all illegal armed forces. In other words, it was, and remains, the obligation of the Russian military to clean the area of any illegal armed groups. Instead, what we have seen is that the Russian military has chosen to protect and enable their activity, help build military fortifications, engage in borderization, and even provide illegal militant groups with military equipment and logistic support. In fact, the activity of the Russian military in the region very much resembles to attempts of implementing Lugansk, Donbas, Abkhazia, or other such projects in the post-Soviet area.

After recent important talks between leaders of Armenia and Azerbaijan, initiated by the EU in Brussels, on April 13 Armenian prime minister Nikol Pashinyan made groundbreaking statements. In his speech, which was praised by the EU, Pashinyan, warned of the dangers of being the only country in the world that doesn’t recognize the territorial integrity of Azerbaijan. These, along with many other promising statements, are a welcome development for all who desire reconciliation and reconstruction. Later, President Aliyev said that Armenia accepted the basic five principles of Azerbaijan for the normalization of relations, which stipulates mutual recognition of respect for sovereignty, territorial integrity, inviolability of internationally recognized borders, and the absence of any territorial claims against each other.

What is likely to come next is resistance and sabotage efforts against these initiatives, carried out by the aforementioned radical and criminal elements in Karabakh hiding behind the Russia military. The experience of the Balkan Wars, among other conflicts, has taught the world that punishing war criminals and removing them from political scene are necessary steps before reconciliation efforts can truly take off. In order to bring lasting peace to the region, along with different reconciliation initiatives, the West should think seriously about what to do about the radical and criminal elements that still reside within Karabakh.