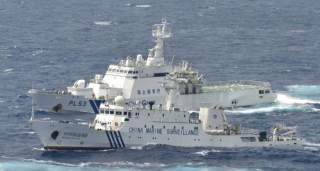 On the afternoon of September 17, 2014 the 1750-ton maritime law enforcement cutter CMS 7008 officially entered service with the Zhejiang province China Marine Surveillance (CMS) contingent.  State-run Xinhua News Agency covered the event in a brief online article, the tone and content of which have become very familiar in recent years.  Aside from listing the ship’s length, beam, displacement, range, speed, cost and other basic facts, the article cites the comments of two CMS officers regarding the advanced features of the new ship.  CMS 7008, we learn, is equipped with a pair of special water cannons—purchased abroad for the extravagant sum of 1.3 million RMB (~$210,000)—capable of sending a jet of saltwater out to 200 meters and a noisemaking device that induces nausea in those within 100 meters of its sound path, giving it a “certain deterrent effect.”  To anybody reading the article, it is clear that this ship was designed to put to sea to confront foreigners.

CMS 7008 is just the latest vessel to join what may usefully be called China’s rights protection fleet.  This fleet includes all of the large displacement (>500 tons) ships, owned and operated by China’s local and national maritime law enforcement agencies and deployed to uphold China’s maritime claims.  By now, their roles are very well known.  Scarborough Shoal and HYSY 981 have become bywords for increasing Chinese assertiveness at sea.  Generally unarmed or lightly armed, they conduct what Christian Le Miere calls “paragunboat diplomacy.”  Missions range from symbolic presence at sea to forcibly expelling foreign vessels from Chinese-claimed waters and screening China’s own incursions.  Rights protection cutters often operate under the protective umbrella of the PLA Navy; but even when the grey hulls are far away they enjoy the special charms that come with representing a powerful state.  Victims of their harassment include both the mighty and the weak.

China’s rights protection fleet has grown tremendously in recent years.  Those who follow China know this.  But seldom are the numbers spelled out.  By my count, China has added 52 new rights protection cutters since Scarborough Shoal.  Many of these ships were the products of earlier building programs coming to fruition.  For example, in fall 2010 China announced plans to build 36 new large-displacement CMS cutters, to be owned and operated by China’s coastal provinces and provincial-level cities.  The first of these ships, the 1,600 ton CMS 8002, reached the fleet in February 2013.  By the end of 2014, most will have been delivered to their owners.

Other decisions to augment the fleet came after Scarborough Shoal.  In late 2012, desperately needing ships to reinforce new footholds in the East and South China Seas, Chinese policymakers decided to transfer 11 large-displacement PLA Navy ships to CMS units.  Most of these are now fully integrated and active in their respective units.  Also in 2012, CMS signed the first of a series of contracts to build very large displacement ships (3,000-5,000 tons), ships capable of remaining at sea for long periods of time, ships comfortable in all kinds of weather, ships especially suited for intimidating foreign mariners.  The first of these began reaching the fleet in early 2014.  By the end of this year, six of these giants will have entered service, with many others waiting to be launched.  The addition of oceangoing ships, some new, some PLA Navy transfers, to the local and national units of China’s Fisheries Law Enforcement Commission (FLEC) also helped fill out the fleet, including, most recently, FLEC 45005 and FLEC 45013, 1,764-ton sister ships owned and operated by Guangxi Province.

The reason why these facts are important is because there is a direct relationship between rights protection ship numbers and China’s capacity to pursue expansionary policies in maritime East Asia.  And the latter is very much on people’s minds.

The ships built since Scarborough Shoal have played important rights protection roles.  Some have tailed and harassed American surveillance vessels operating in China’s Exclusive Economic Zone (EEZ).  Several have been rotated through the Senkaku/Diaoyu Islands.  Many were present at some time or another to protect HYSY 981.  But perhaps the most vivid example of the relationship between new ships and unfolding events at sea took place early this year.  CCG 3401 joined the China Coast Guard’s South China Sea Contingent on January 10, 2014.  At 4,000 tons, it was the first of the new very big ships delivered after the creation of the China Coast Guard in July 2013.  Within weeks of entering service, CCG 3401 appeared off the Second Thomas Shoal, on a mission to obstruct Philippine access to its small garrison stationed on the rotting hulk of the BRP Sierra Madre.  Its vigorous pursuit of a Philippine replenishment ship, the minatory grandeur of its hull in profile, made it the villain in the now iconic image of Chinese gunboat diplomacy in the South China Sea.

Stepping back from the details, what precisely do Chinese policymakers intend to do with the country’s new fleet?  First of all, we must reiterate that the PRC has not built the world’s largest coast guard fleet to conduct search and rescue operations or protect the environment—though these ships do sometimes perform such missions.  Nor would it make economic sense to invest billions of dollars to design, build, man, fuel, provision, and maintain these ships so they can conduct symbolic patrols through disputed waters or simply collect evidence of others’ infringements.  To be sure, the last two years have seen a clear trend away from the declaratory towards the coercive.  This is illustrated by a growing catalog of events at sea.  But recent developments also reflect state aims outlined in authoritative government documents.  These may provide useful insights into things to come.

Foreign observers often speak of Chinese intentions to achieve “control” over the near seas of East Asia.  What precisely that means, is seldom explained.  In fact, Chinese texts do speak of control. In many cases, they use the word guankong, which combines the character for manage (管) with the character for control (控).  Together, they mean something akin to “administrative control.”  Guankong can be exercised over land—e.g., Scarborough Shoal—and over the sea.  It is often used interchangeably with the word kongzhi (control) and shiji kongzhi (effective control).  Use of these terms in recent foundational documents such as China’s 12th Five Year Plan for Maritime Development suggest that China has expansionary goals independent of the actions of other states.  In the section on safeguarding China’s maritime rights and interests, this document highlights the aims of “strengthening effective control” and “raising capacity for administrative control” over the three million square kilometers of Chinese jurisdictional waters, a large portion of which is also claimed by others.

The speeches and writings of leaders within the State Oceanic Administration (SOA), which now decides deployment patterns for the rights protection fleet, likewise adopt the language of control.  Writing in the January 18, 2013 issue of China Ocean News, Qian Honglin, Party Secretary of the South China Sea Branch of SOA, asserts that one of the takeaways of the 18th Party Congress (which introduced the objective of turning China into a “maritime great power”) is that China must better safeguard its maritime rights and interests. This includes “raising the country’s capacity to exercise effective administrative control over jurisdictional waters.”  In a front page article in the June 7, 2014 issue of the same paper, SOA Director Liu Cigui outlines his vision of what it means for China to become a “maritime great power.”  After citing a series of baleful trends that threaten Chinese economic and security interests, Liu writes that China’s only option is to raise its capacity to exercise administrative control over the sea.

But what does it mean to control the sea in peacetime?  Given the context, it appears to mean using law enforcement forces to assert Chinese administrative prerogatives over claimed waters:  deciding which activities can take place and which cannot, on the basis of Chinese domestic law.  It means both thwarting others’ efforts to actualize their claims and safeguarding Chinese efforts to realize their own.  It is necessarily coercive.  Noncompliant foreign ships will be bumped, shouldered, and rammed, their crews blasted with seawater and nauseated by sound—in short, everything short of open belligerence.  While state documents do not explicitly call for peacetime campaigns to expand control over claimed territories, the logic of seapower, illustrated by Scarborough Shoal and the Second Thomas Shoal, dictates that mastery of seaborne communications leads to effective control over claimed land features.

The scope of China’s claims in the East China Sea is clear.  Beijing asserts sovereignty over the Senkaku/Diaoyu Islands and jurisdiction out to the edge of a very extended continental shelf.  Its claims in the South China Sea are much more ambiguous.  Chinese leaders believe that China has sovereign rights to all of the land features and many of the submerged features within the nine-dash line, but they have not officially defined the nature of China’s “historic rights” over the waters therein.  However, the good work of Australian-based scholars Scott Bentley and Andrew Chubb confirm that Chinese maritime law enforcement forces operate on the assumption of some type of jurisdictional authority over all of the waters within the nine-dash line.