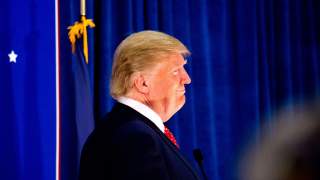 IN HIS inaugural address, Donald Trump vowed to shun globalism and follow a policy of America First. “We do not seek to impose our way of life on anyone,” Trump said, “but rather to let it shine as an example. We will shine for everyone to follow.” His statement captured the division over American foreign policy since the founding of the republic, though it may be wondered whether Trump himself is closely acquainted with this divide. He has, after all, declared his unfamiliarity with the tenebrous origins of America First, which was once the rallying cry of a motley crew of isolationists and anti-Semites who opposed American entry into World War II. Trump’s embrace of the slogan, however, has revived a fundamental question that Americans have confronted since the founding. Should the United States intervene abroad to promote liberty and prosperity? Or should it look inward, focusing on rebuilding at home?

Despite its aversion to becoming entangled in European affairs, the republic, for much of its early history, largely adhered to Talleyrand’s famous maxim pas trop de zèle—not too much zeal. While many contemporary neocons might like to bid farewell to Washington’s Farewell Address, it had a lasting impact. Thus, in 1821, when Greek revolutionaries sought to overthrow Ottoman rule, Secretary of State John Quincy Adams warned against American intervention. He admonished that America should not go

in search of monsters to destroy. She is the well-wisher to the freedom and independence of all. She is the champion and vindicator only of her own. She will commend the general cause by the countenance of her voice, and the benignant sympathy of her example.

Over a century later, Walter Lippmann, who had drafted the Fourteen Points for Woodrow Wilson, sounded a sober note in his 1943 book U.S. Foreign Policy: Shield of the Republic that was far removed from his youthful Wilsonianism:

We must consider first and last the American national interest. If we do not, if we construct our foreign policy on some kind of abstract theory of rights and duties, we shall build castles in the air. We shall formulate policies which in fact the nation will not support with its blood, its sweat, and its tears.

For all the talk of crusades during the Cold War, it was, by and large, a pragmatic realpolitik that prevailed, leavened by periodic calls for democracy and human rights abroad. There was no rollback of Communism. Instead, a de facto sphere of influence obtained in both Europe and Asia. Germany and Korea were each divided. The sixteenth-century European dictum—Cuius regio, eius religio—prevailed. Confrontations with the Soviet Union were mostly indirect and confined to the Third World, where the United States, more often than not, backed ideological freebooters and launched coups, whether in the Middle East, Africa or Central America. The essential mantra of the Cold War, for both superpowers, was stability, even as they sought to nudge the correlation of forces in their own favor.

After the fall of the Berlin Wall in 1989, however, a triumphalist narrative emerged in Washington in which any caution about the deployment of American power was cast aside. Stability was out. Revolution was in. The controversy about America’s destiny was really initiated by Francis Fukuyama, whose essay “The End of History?”—the question mark is often forgotten—appeared in the Summer 1989 issue of the National Interest. Owen Harries, TNI’s founding editor, and himself a realist thinker, used Fukuyama’s essay to jump-start the magazine, though he, like Irving Kristol, the publisher, can scarcely have agreed with it. Harries went on to commission a series of lively essays from prominent intellectuals and journalists, ranging from Irving Kristol to Charles Krauthammer, from Nathan Glazer to Patrick J. Buchanan, about America’s purpose in the world. After appearing in the magazine, the essays were collected and published in 1991 in a book called America’s Purpose. The clash between realism and neoconservatism was clearly illuminated. But in retrospect, it is abundantly clear that the neocons won the war almost without firing a shot.

Emboldened by the unexpected demise of the Soviet Union, neoconservatives and liberal-internationalist hawks made common cause, first over war in the Balkans, then in Iraq. This consolidation of neocons and liberal hawks had been foreshadowed in a 1990 essay by Charles Krauthammer in the National Interest called “Universal Dominion: Toward a Unipolar World.” In it, Krauthammer said that America’s purpose was obvious. He called for a confederated West that would inexorably spread its values around the world. Krauthammer wrote that its creation would require “the conscious depreciation not only of American sovereignty, but of the notion of sovereignty in general.”

Even more expansive were the claims of liberal internationalists such as Thomas Friedman who saw a new age of globalization dawning—and ignored the fact that Europe had never been more unified than on the eve of World War I. Their catechisms about globalization carried echoes of the Communist Manifesto:

National differences and antagonisms between peoples are daily more and more vanishing, owing to the development of the bourgeoisie, to freedom of commerce, to the world market, to uniformity in the mode of production and in the conditions of life corresponding thereto.

In many ways, the beliefs expressed by Friedman and others in the beneficent effects of globalization are part of the DNA of modern liberalism. John Stuart Mill, for example, believed that global trade would not only suppress the inclination to war, but also elevate humanity. He wrote,

It is hardly possible to overrate the value, in the present low state of human improvement, of placing human beings in contact with persons dissimilar to themselves, and with modes of thought and action unlike those with which they are familiar. . . . It is commerce which is rapidly rendering war obsolete, by strengthening and multiplying the personal interests which are in natural opposition to it.

The belief in the obsolescence of war was disseminated by Friedman and others. Even as the latest proponents of globalization touted its benefits, however, there were dissenting voices. One of the earliest was Samuel Huntington in the National Interest in 2004. Huntington decried the rise of the cosmopolitan Davos Man. The very word Davos should have set off alarm bells among the international elites who traveled there to mingle and feel good about themselves. Davos was, of course, the Alpine retreat where Thomas Mann based his famous 1924 novel The Magic Mountain, presenting what might be called the first Davos Man. In his novel, Mann mocks the humanist Lodovico Settembrini, who beguiles the protagonist Hans Castorp with visions of a League of International Justice for Progress that is supposed to banish all of mankind’s afflictions. The Magic Mountain concludes with Castorp about to die in combat in World War I. That era’s authors harbored none of the illusions about the universality of mankind that have periodically afflicted the great and mighty: Italo Svevo’s Confessions of Zeno, which was published just one year before The Magic Mountain, in 1923, has the affable Zeno watching in bewilderment, towards the conclusion, as he gets caught up in the fighting in Trieste, on the border between the Austro-Hungarian Empire and Italy.

Huntington did not allude to Mann, but he assailed the “gold-collar workers” who scorned the nation-state and traditional communities. He depicted them as a gilded cohort that “have little need for national loyalty, view national boundaries as obstacles that thankfully are vanishing, and see national governments as residues from the past whose only useful function is to facilitate the elite’s global operations.”

Then there is Patrick J. Buchanan. In many ways, Buchanan set the stage for Trump, both in tone and policy. When he ran for president in 1992, in the Republican primary against establishment scion George H. W. Bush, he denounced him for permitting a trade deficit to grow and for “groveling” to China. If Washington elites wanted to defend a border, he said, “why don’t they try defending the southern border of the United States of America!” Writing in the National Interest in 1990, Buchanan adumbrated these themes. He directly attacked Charles Krauthammer’s unipolar-world essay. He attacked the notion that American sovereignty should be diffused into a Western confederation.

Instead, he called for a policy of “America first—and second, and third.” Buchanan was aghast at the idea that the United States should subordinate its sovereignty to global organizations. According to Buchanan, “We cannot forever defend wealthy nations that refuse to defend themselves; we cannot permit endless transfusions of the life blood of American capitalism into the mendicant countries and economic corpses of socialism without bleeding to death.” Prefiguring his opposition to the second Iraq War, Buchanan added,

We should look, too, with a cold eye on the internationalist set, never at a loss for new ideas to divert U.S. wealth and power into crusades and causes having little or nothing to do with the true national interest of the United States.

THAT IS what four important new books about globalization and American foreign policy do. Walter McDougall, a professor of history at the University of Pennsylvania; Stephen Kinzer, a senior fellow at the Watson Institute; Tony Smith, a political scientist at Tufts University; and Pankaj Mishra, a fellow of the Royal Society of Literature, are the authors, respectively, of The Tragedy of U.S. Foreign Policy, The True Flag, Why Wilson Matters and Age of Anger. They provide valuable insights into the debates currently unfolding about globalization and America’s purpose. All were, of course, written long before Trump’s victory, but they offer a broader context for the events that are currently taking place, both in America and the wider world. All are, in their own way, skeptical of efforts to reshape the world in America’s image.